Ms. Norbury:  "Well, I don't know who wrote this book, but you all have got to stop calling each other sluts and and whores.  It just makes it ok for guys to call you sluts and whores." 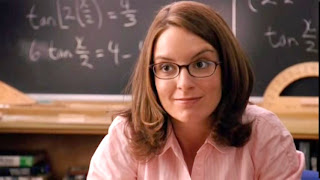 Tina Fey, a performer to whom I'd send valentines on a monthly basis, played high school teacher,  Ms. Norbury, in the 2004 comedy, Mean Girls.  Ms. Fey is the featured guest tonight on the opener for Season 19 of Inside the Actors Studio on Bravo. 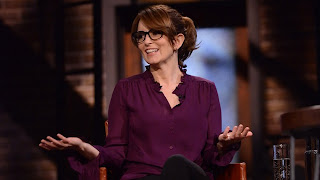 Remember when Bravo TV would give major promotion to that Emmy and Peabody Award-winning show hosted by James Lipton?  I miss those days. 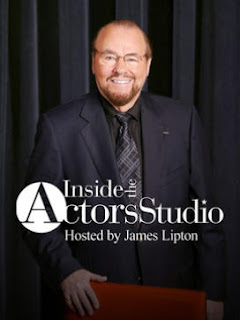 Now Bravo TV airs more promotion for reality shows featuring unknown housewives who seem to have more money and free time than they do social skills.

One of the best hours of my career when I lived in New York City was spent at the Directors Guild on West 57th Street.  I was asked to be the "James Lipton," if you will, for an Interview with Tina Fey.  I'd moderate questions from audience members too.  Mean Girls had just been released on DVD and Fey was eligible for a Best Screenplay Adaptation of 2004 Oscar nomination.  The actress also wrote the screenplay.  She didn't get a nomination but she was eligible.  And a smart adaptation it was.

The movie was about getting through that social and emotional minefield called "high school."  Lindsay Lohan starred in the movie.  Today, Lohan is known more for her courtroom dates than her film career.  However, when folks comment "she is talented," the performance in Mean Girls is an example of why folks say that.  It's a charming, witty, skilled performance in a comedy that makes a good point for teens.  Especially girls. 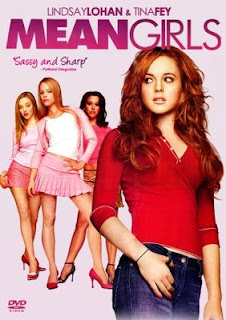 The film company representative made sure I had a copy of the DVD.  Of course, I watched it and took notes before my interview with Tina Fey.  After I watched Mean Girls, I watched it again playing the DVD commentary track.  Tina and, I believe, film director Mark Waters, did the lively commentary.  Some commentaries can be either informative but wooden or chatty and pretty hollow.  Not this one.  It's energetic and interesting.

There's a high school gym scene.  Students are seated in the stands.  Two Asian-American girls are speaking in a foreign language, so their dialogue is subtitled.  They use the "N-word" when engaged in slang-filled girl talk.  The commentary dialogue had been fabulous, non-stop banter going back and forth between Tina Fey and her partner.  When that scene with the N-word came, there was such a curious, noticeable gap of silence that I thought there was an audio glitch with the DVD or my DVD player.  I took the DVD out, wiped it off, and put it back in the machine.  Nothing was wrong.  The silence was in the commentary.

I asked Tina Fey about that during our interview at the Directors Guild.  I loved that she gave me a direct, honest answer.  The plentiful use of "nigga" in rap/hip hop music, some movies, comedy routines and in casual teen street talk pretty much made her, as a writer, feel that it was ok to use in her screenplay.  After one of her longtime best friends, an accomplished middle-aged black woman, saw the film, Fey had a change of heart.  Her friend disliked seeing the word, she dislikes the casual use of the word, she didn't find the scene funny and she told Tina why.  Tina got it.  She needed the honest feedback.  She apologized.  She truly didn't mean any disrespect and would not use that word in a light-hearted way again.  Where some white actor/screenwriters might have gotten uncomfortable and tried to avoid the racial issue, she was forthright and responsible.  She owned it in a refreshing, enlightening way.  A good example of rights and responsibilities and how artists can benefit from feedback.  Also, what Fey had to say was food-for-thought on casual use of the word in mass entertainment by us minorities.

Love me some Tina Fey.  I hope to interview her again one day.  I bet she turns out to be one of James Lipton's best guests on tonight's return of Inside the Actors Studio.

Did you know that Lipton is in his mid-80s?  Yes.  And still working on TV.  Bravo to him.