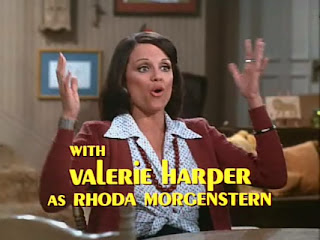 The Mary Tyler Moore Show, the truly classic 1970s sitcom, made Valerie Harper a star.  She was America's Best Friend on that show.  We wanted to spend some of every Saturday night with the next door neighbor and number one gal pal to Mary Richards.  Not since Lucy Ricardo and Ethel Mertz had there been such a fabulous female friendship on a sitcom.  As Rhoda Morgenstern, Harper gave us the quality of wisecracking loyal and straight-shooting buddy that we were used to seeing in classic Hollywood films played by such charismatic Oscar-nominated actresses as Eve Arden and Thelma Ritter.  When I was a Los Angeles kid dreaming of a television career in New York City, Rhoda Morgenstern was who I hoped most New Yorkers would be like.  I think, to a degree, I became like Rhoda when I did work and live in New York.  It was destiny.  My sister and I both attended Marquette University in Milwaukee.  The Midwest.  Remember what Rhoda once said to Mary about living in the Midwest?  "I thought with the cold weather, I'd keep better."  After we'd done our college time and were starting our new adult lives, my youngster sister and I lived in the same apartment building.  Just like the Morgenstern girls did on Valerie Harper's hit sitcom spin-off series.  Friends nicknamed us "Rhoda" and "Brenda."  When our mother visited from California, she and I had squabbles about my life like Rhoda and her mother did.

Many years later, when I was a Manhattan resident, a friend set me up on a blind date.  My date, Franz, was a very tall and slim and reserved German.  And blond.  Really blond.  So blond he was almost invisible.  We met for a bite to eat one night in Greenwich Village.  About his youth in Germany, Franz said "I couldn't vait to get out of zee country.  It vas so...provincial.  I vent to Berlin."  I thought to myself, "OK...if this goes to a second date, I'm painting my fingernails green.  Like Liza in Cabaret."  Somehow we got onto the topic of favorite TV shows and Franz suddenly became animated. 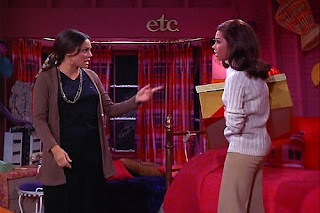 At that moment, the German and I had common turf.  And not by invasion.  We loved Rhoda.  After that he loosened up and told me about his early days in Berlin.  Franz entered an amateur talent contest with two friends.  They were in drag and lip synced.  I asked, "Who were you?"

He replied, "Diana Ross und zee Supremes.  I vas...Diana."  When a German man in drag sings "Stop! In the Name of Love," I bet it sounds more like a military order than a musical plea.

Then, with an obvious trace of lingering bitterness, he told me that they were very good but they lost the contest and the big money prize.  "We lost to a man spinning plates on sticks.  I am convinced zee contest vas fixed.  I know it vas fixed."

See?  That was exactly the kind of blind date Rhoda would've had.  I never saw Franz again.

When I heard Valerie Harper on KPCC that Wednesday morning, February 13th, she was so warm, witty, wise and generous in her praise of The Mary Tyler Moore Show cast and production team.  Her affection for them is in her new memoir, which she was promoting on the show.  It's entitled I, Rhoda.  I read some of it just last week in a San Francisco bookstore.  Here's the Golden Globe and Emmy-winner's I, Rhoda book cover. 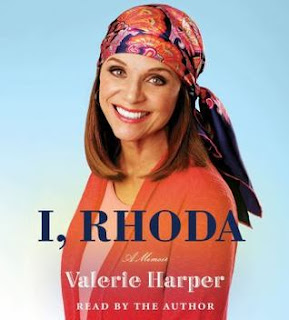 I recently taped a TV interview with an author in New York City.  It airs next weekend.  I'll tell you about that later.  Deep in my heart, I admit there's a prayer that my performance will be so good that it'll lead to a regular job back on the East Coast.  After I'd browsed through Valerie Harper's book last week, I thought..."It would be so great if I could return like Rhoda and say 'New York, this is your last chance.'"

On the Feb. 13th KPCC "Take Two" news/talk show, Valerie Harper sounded energetic and carefree.  Today's news that she's stricken with terminal brain cancer breaks my heart.  In the late '90s, I hosted a live local nighttime cable show in New York.  She was a guest one night.  Besides loving her work on The Mary Tyler Moore Show and her hit spin-off, Rhoda, I'm a fan of her other TV work like the adaptation of the Pulitizer Prize-winning play, The Shadow Box.  That 1980 network production co-starred Joanne Woodward and Christopher Plummer.  Paul Newman directed the drama.  Harper played Maggie, the wife confronting her husband's terminal illness.  She played the chic gal pal to Marsha Mason's character in the film version of Neil Simon's Broadway comedy, Chapter Two.  On Broadway, I saw TV's Rhoda play Prime Minister of Israel, Golda Meir.  She was excellent.  I want you to know that Valerie Harper was everything I hoped she'd be in person -- polite, funny, gracious, grateful to me and my TV crew.  That's the spirit that made her America's Best Friend.  I will certainly keep her in my prayers.