TIME Magazine's critic felt it landed with a thud.  Roger Ebert liked it.  I'm on Team Roger.  I was charmed by and entertained by 2 Days in New York, a comedy written and directed by Julie Delpy.  Is  it a great comedy?  No.  It's not a category with the best of Billy Wilder, Elaine May or Woody Allen.  But, to me, it sure felt fresher than another comedy released over the summer -- Woody Allen's To Rome With Love.  The working class French family making a mess of things in Manhattan tickled me more than the upscale Americans in Italy with sex on their minds.  Julie Delpy stars in this low-budget indie comedy.  Chris Rock stars as the overwhelmed new man in her life, Mingus. 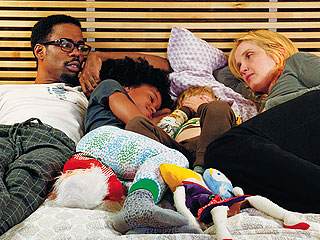 This is a sequel.  Her character, Marion, broke up with Jack.  Adam Goldberg played her American in Paris boyfriend in 2007's 2 Days in Paris.  That was a fun movie Delpy also wrote and directed. One of the reasons why TIME's critic didn't like this sequel is because, as she wrote, Chris Rock can't act.  Well, to me, there are times when Goldberg can really overbake the New York hipster bit and does just as much "schtick" as she accused Rock of doing.  Did you ever see Seinfeld?  C'mon.  Jerry Seinfeld wasn't much of actor but he was hailed as a comedy sensation.  Has Billy Crystal ever starred in a comedy that didn't get injected with Billy Crystal "schtick"?  I thought Rock did some fine work under Delpy's direction.  He's not the stand-up comedian Rock.  He's more subdued.  He has to react here.  He's basically her straight man in a more sophisticated original comedy than he usually releases.  I totally bought him as Mingus, probably the one black host on a liberal National Public Radio-type station in New York. 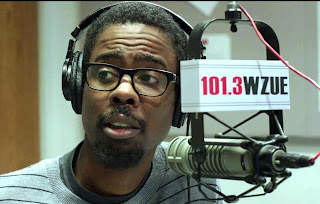 In our history of movies, we see the French as being the epitome of class, sophistication and fashion statements.  In Sabrina (1954) and Funny Face (1957), Audrey Hepburn is the smart, overlooked caterpillar who goes to Paris and becomes an elegant, desirable butterfly.  Marion, a French woman in Manhattan, is one lovable mess.  Delpy flips the script on how we see French women in American movies.  Marion and Mingus are a Manhattan couple with sweet youngsters from previous relationships.  She's stressed because she's an artist with an exhibit coming up -- and her family is coming into town.  Her family is a handful.  Dad tries to smuggle sausages down his pants, for one.  He's like a cross between Santa Claus and one of the Dead End Kids.  Marion bickers with her jealous sister.  The sister brings her boyfriend.  He happens to be Marion's ex-boyfriend. Cultures will clash in a kooky way as Marion's unpredictable relatives disrupt everything. 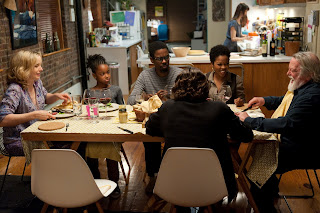 I've seen Delpy do drama.  She's delightfully ditzy in this comedy -- like Annie Hall with a Bordelaise sauce on the side.  Mingus just wants to get through all this as gracefully as he can.  One of my favorite screwball moments finds them all at a restaurant.  Mingus, of course, want to distinguish himself in his radio career.  At the restaurant, he runs into a gentleman who may be able to help him get a short interview with President Obama.  As he's networking with the man, Marion and Rose (her sister), start bickering slightly.  Then the bickering gets more intense.  Then they start punching each other like grade schoolers.  It's so goofy, so un-French. I loved it.  Like Diane Keaton, Delpy can do screwball comic acting with a nice light touch and also be effective dramatically.  Think of Keaton's comedies -- Sleeper, Love and Death, Annie Hall and Baby Boom.  Think of her strong dramatic work -- Looking For Mr. Goodbar, Reds, Shoot the Moon and Marvin's Room.  When I saw Woody Allen's To Rome With Love, it made me feel like I was sitting in a tepid bath.  Nothing wrong -- just not much is happening and the water could be warmer.  I felt as though I'd seen it already.  Ellen Page was basically a modern-day rewrite of the Diane Keaton character from Allen's Manhattan.  Penélope Cruz, quite yummy, was basically a Sophia Loren character from a 1960s Vittorio De Sica movie. 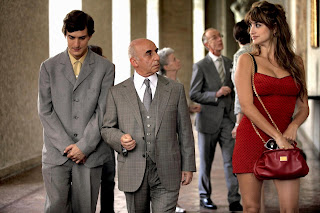 The neurotic opera singer could've been a Broadway Danny Rose act.  Alec Baldwin played an update of Bernadette Peters as the muse in Woody Allen's Alice.  Jesse Eisenberg was a tad like Mia Farrow as Alice.  Allen's To Rome With Love summer release was very familiar.  Like good Italian leftovers reheated and served with cocktails. 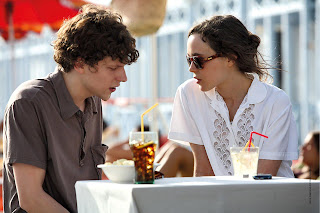 Woody Allen was a darling of movie critics and fans in the 1970s and '80s with wonderful films he directed and wrote such as Annie Hall (the 1977 Best Picture Oscar winner), Manhattan, Zelig, Broadway Danny Rose, The Purple Rose of Cairo and Hannah and Her Sisters.  Then some fans started to wonder why the director never had any black people in supporting and/or lead roles in his movies rooted in New York City.  Soon critics too noticed the lack of color.  That changed when Hazelle Goodman played Cookie, the hooker, in his 1997 comedy Deconstructing Harry.  Julie Delpy's 2 Days in New York is the kind of loopy comedy Woody Allen could've made in the 1980s if Allen had given a lead role to a black or Latino actor.  That's a main reason why I appreciate it. 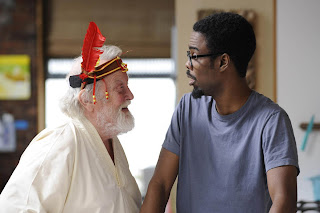 This isn't a classic comedy like Annie Hall but watching Mingus' culture shock dealing with his girlfriend's relatives made me giggle like I did watching Woody as Alvy Singer deal with Annie's family.  Marion's scamp of a dad is played by Albert Delpy, her real-life father.  I liked seeing Rock challenge himself with a more upscale role.  This isn't the big Rock of movies like Lethal Weapon 4 with Mel Gibson, Down to Earth and Head of State.  He brings it in.  He's believable.  I felt like I knew low-key Mingus and nervous Marion. 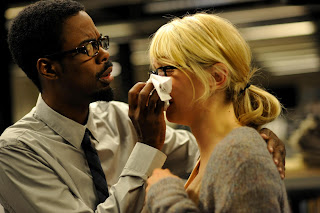 Ms. Delpy has got the gift for writing, directing and performing comedy.  This film of hers did make me wish that Woody Allen had cast black or Latino actors in top roles in his comedies of the '70s and '80s.  That would've been so great for diversity and such a truer reflection of the real New York.  Delpy showed me a New York that I know.  She showed me situations I've experienced.  And how refreshing to see a working class Manhattan couple in an average-sized apartment.  I enjoyed spending time with these two. 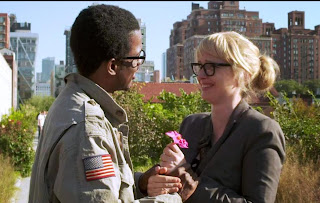 Julie Delpy's 2 Days in New York is a breezy comedy and a good date night movie.