Last year, The Help stirred up some controversy because of Hollywood, yet again, giving black women domestic duty. Starting with Oscar winner Hattie McDaniel for 1939's Gone With The Wind, here are names of other black actresses who got Academy Award nominations for playing women who were maids: Ethel Waters, Juanita Moore, Alfre Woodard, Oprah Winfrey, Octavia Spencer and Viola Davis.   Spencer and Davis were both in 2011's hit, The Help.  Octavia Spencer, like Hattie McDaniel, won for Best Supporting Actress.  In the history of Hollywood's Academy Awards, these actresses received only one Oscar nomination:  Hattie McDaniel, Dorothy Dandridge (the first black woman nominated for Best Actress), Cicely Tyson, Ruby Dee, Diahann Carroll, Diana Ross, Angela Bassett and Halle Berry (first black woman to win Best Actress).  Only one nomination each.  Marisa Tomei has three nominations to her credit.  I'm not disrespecting Tomei's solid acting skills. She had what those black actresses didn't --  many script offers with more good movie roles that could make her an Oscar contender again.  It's 2012 and only two black women have more than one Oscar nomination to their credits:  Whoopi Goldberg (The Color Purple and Ghost) and Viola Davis (Doubt and The Help).  Today, some folks wonder if Hollywood really "gets it" because of the news that Zoe Sandana is in consideration to play the late, great, politically outspoken singer/songwriter Nina Simone.  Ms. Saldana is currently onscreen in The Words. 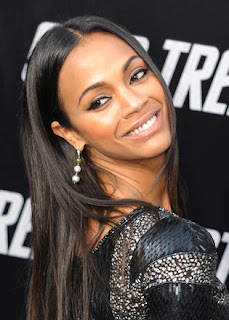 We love Zoe and her skills.  But this is the kind of news that makes many of us want to say to Hollywood, "Seriously?"  Did any black execs help make that casting idea?  Simone was outside of what mainstream American saw as "pretty."  She was so "in-yo'-face" black and tough that audience members went into Nina Simone shows nervous and hoping that she'd like them.  Look at her.  Listen to the soul survivor gravity in her voice. 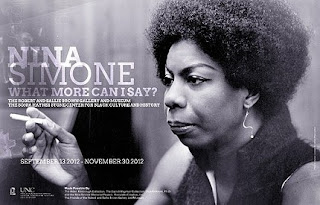 I often find myself wondering if Hollywood "gets it" in regards to casting and providing opportunities for black actors.  Is Hollywood aware of us and our background so it can make more informed and inspired choices?  Are the white journalists who report on Hollywood product aware of the same?  David Edelstein reviews movies for New York Magazine.  He's also the movie critic on CBS Sunday Morning and reviews films on National Public Radio.  In his NPR review of 2005's Hustle & Flow, he praised lead actor Terrence Howard basically saying that he was a good new actor "like a young Samuel L. Jackson."  WHAT?!?!? I have watched Howard for well over a decade.  Like have a lot of other black filmgoers and TV watchers. We remember when he was billed as Terrence Dashon Howard.  Up to the hit 2000 movie, Big Momma's House, he was still using his middle name.  And he had a key role in that movie.  Before Hustle & Flow, movie that earned him a Best Actor Oscar nomination, Howard played real-life characters on TV in three biopic dramas:  He was Jackie Jackson in The Jacksons:  An American Dream (1992), he had the lead role in Muhammad Ali:  King of the World (2000) and he was Ralph Abernathy working with Martin Luther King, Jr in civil rights movement story, Boycott (2001).  He was the rhythm-challenged high schooler Richard Dreyfuss gives special attention to in Mr. Holland's Opus (1995).  That same many black moviegoers saw him in the very popular and under-appreciated social drama, Dead Presidents, directed by the Hughes Brothers.  (Allen and Albert are black siblings who directed films together, just like the Coen Brothers have).  But, if you heard Edelstein's NPR segment and were unaware of Howard's resumé, you'd believe that he was a "new" actor based on that review.  He wasn't like a young Samuel L. Jackson in 2005's Hustle & Flow. 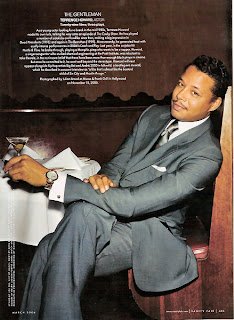 Born in 1969, he was like a middle-aged Terrence Dashon Howard finally getting attention from mainstream entertainment press for his outstanding work.  Were there any black or Latino movie critics on working network morning news shows to give you that info?  No.  Hey, Hustle & Flow Best Song winners -- It Ain't Just Hard Out Here For A Pimp.  Maybe Hollywood is stumped for film and casting ideas?  With that in mind, perhaps I can help.  The Academy loves biopics.  If you're not going to consider Viola Davis for the Nina Simone role, why not offer her a good biopic script about famed singer and musician Dinah Washington?  Dinah's in the Rock and Roll Hall of Fame, the Grammy Hall of Fame...heck, she was even honored on a U.S. postage stamp.  One of the most popular singers of the 1950s, this hard-living, larger-than-life woman packed a lot into her 39 years on "This Bitter Earth" (the name of one of her hits).  Married seven times, she was literally a pistol-packin' mama who was called "The Queen of the Blues." 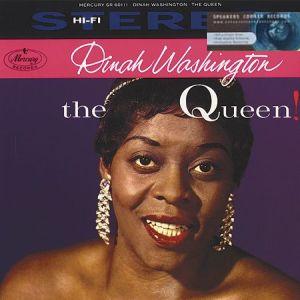 One of the greatest nights of Broadway theatre I ever experienced was seeing James Earl Jones in August Wilson's Fences.  If that audience had been barefoot and the floor was covered with small rocks and sticky soda, it still would stood and stayed on its feet to give him the long, roaring ovation it did that night in the 1980s.  What an extraordinary performance and play.  The hit 2010 Broadway revival starred Denzel Washington and Viola Davis.  None of the Pulitzer Prize winning work by August Wilson has been been adapted for the big screen.  Why not star Viola Davis in a movie version of Fences? 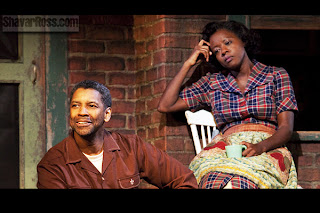 African-American playwright Wilson wrote dramas about black family life.  He won the Pulitzer Prize for Fences (1987) and The Piano Lesson (1990).  A groundbreaking playwright who also wrote about black family life was feminist and humanitarian Lorraine Hansberry.  Her Broadway drama, A Raisin in the Sun, was the first play written by an African-American woman to be produced on Broadway.  She was the first African-American to direct a play on Broadway.  Sidney Poitier, Ruby Dee and Lou Gossett, Jr. recreated their stage roles in the 1961 movie version.  In August, I interviewed Mr. Gossett for a PBS TV pilot project.  I asked him about Hansberry and what it was like to work with the acclaimed writer/activist who died young of pancreatic cancer. 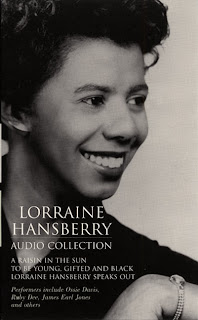 She had a strong personalty and was committed to challenging bigotry.  She spoke out for racial equality and gay rights.  When I asked the Oscar winner who should play Lorraine Hansberry if there was a biopic project, he quickly answered "Taraji P. Henson."  He didn't even have to think it about for a couple o' seconds.  TV viewers know Ms. Henson as Detective Carter on CBS' Person of Interest. She was a Best Supporting Actress nominee for The Curious Case of Benjamin Button (2008).  I love her work. 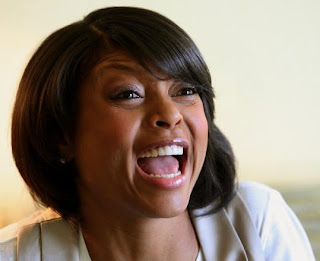 Here's another musical biopic idea for Hollywood:  Before Diana Ross of The Supremes, there was the wonderful Motown star, Tammi Terrell.  She and Marvin Gaye sang "Ain't No Mountain High Enough" and "You're All I Need to Get By" up the Billboard charts.  Despite a painful life, she had the sunniest personality singing with him and singing solo.  The TV camera helped made her a star.  She had charisma and crossover appeal. 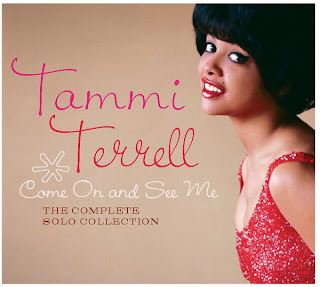 She was gang raped at eleven.  In her late teens, she was in a physically abusive relationship with singer James Brown.  She had great chemistry with Marvin Gaye.  During a concert performance in 1967, she collapsed in Gaye's arms.  What she thought was another in her history of migraine headaches was really a brain tumor. 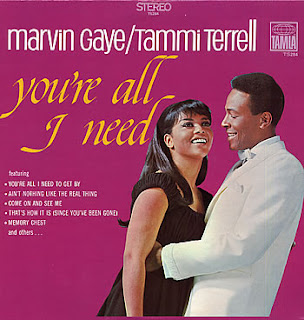 It was written that Gaye never got over her death in 1970 and, grief-stricken, started a relationship with drink and drugs.  And, Hollywood, what about a Marvin Gaye biopic?  Over the summer, a ticket agent at San Francisco's Embarcadero AMTRAK station recommended to me a couple of novels  by black authors.  He felt that they'd make good movies.  One is Sag Harbor by Colson Whitehead.  We get a contemporary look at race, class and pop culture in the journey of a black teen who spends a summer in The Hamptons.  That New York upper class location can be oh-so-exclusive and not teeming with racial diversity while many of its residents consider themselves to be liberals.  What will that Cosby Show-generation teen discover about life and himself? 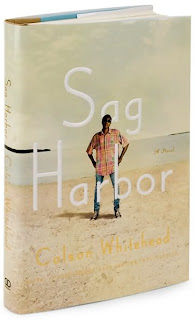 The other book he recommended is Erasure, a zany satire by Percival Everett. 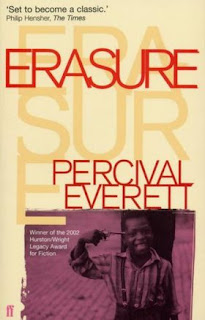 This story sounds like something Mike Judge should direct.  I pick him because I loved what he did with Idiocracy, a sharp and funny 2006 satire that irked so many corporate types it was practically shelved by the movie studio.  And should not have been.  Rent it.  The futuristic look at the "dumbing down" of America is still relevant.  In Erasure, an English Lit. professor is so fed up with book publishers telling him that his writing isn't "black enough" and not full of the racial drama readers got in some of Oprah's Book Club selections that he takes his blackness way into the red zone and writes a satirical response as an angry, brutal, dehumanized black man.  THAT is the work that gets him writing star attention.  No one wants to believe in an educated, well-employed, sophisticated black man.  Erasure could make a fabulous screen satire.  In fact, I'd like to have a crack at the lead role.  Those are a few of my Hollywood ideas for blacks actors.  By the way, Warner Brothers is shooting a remake of 1990's House Party.  I kid you not. 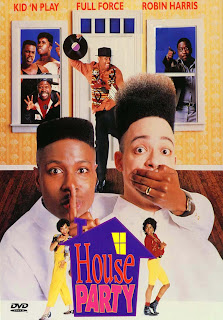 Or, rather, I Kid 'n Play you not.  Let me know what you think of my ideas.