When I was the weekly film reviewer for Whoopi Goldberg's syndicated morning radio show, one of the films I reviewed was World Trade Center, a 2006 drama starring Oscar winner Nicolas Cage and directed by Oliver Stone.  One character, above all others, touched my heart and crystallized something that needed to be said cinematically -- something that was said by a dear, wise friend of mine in New York City a couple of weeks after the attacks and horror.  She said that this was one of the greatest tragedies of that September 11th morning:  "Not all the people who were killed that day died knowing they were loved."  We don't want to think about something like that but it's so true.  Especially in a big place like New York.  People can be casually "blown off," postponed or otherwise pushed aside because they aren't hot-looking enough or fabulous enough.  Sadly, it's human nature.  People who do care assume you know it and take you for granted.  Why? Because you're always there.  You'll always be there.  Like water that always comes out of the tap when you turn it on.  Until one day it doesn't.  One woman in World Trade Center really got that.  We didn't learn her name.  She was billed as "Mother in Hospital" in the closing credits.  I stayed through those closing credits to see the name of the actress who broke my heart in that bit part and elevated Stone's whole 9/11 drama in only about two minutes of screen time.  Her name -- Viola Davis. 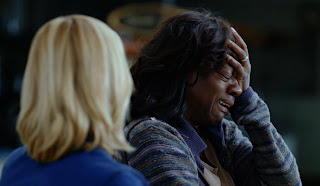 Ms. Davis reflected a truth about us all.  Your heart breaks because you know her.  Because you've been her.  One night in 2001, near the end of September, I saw an encounter that touched my heart in the same way that movie scene would.  Folks had started to go out again.  Gone was the New York boisterousness.  It was replaced with a solemnity and a quietness out of respect -- a quietness also caused by our spirits having been numbed by what we saw and survived.  Instead of avoiding eye contact, a staple of Manhattan street life, people now looked each other in the eye with compassion and concern.  When people asked "How are you?," they really listened to the answer.  Through all the candlelight vigils and the murmurs of "This was all about oil," there was a new embrace of diversity.  We were glad that each other was here.  I was standing in front of a favorite neighborhood diner on the corner of 8th Avenue and 21st Street in Chelsea, waiting for a friend.  A young guy was walking his dog.  Also walking a dog was a young woman that he knew.  In a movie, he would not have been the handsome lead.  He would've been the plain-looking, dark-featured, slim best friend to the handsome lead character.  She was very pretty.  He asked how she was and tastefully asked if everyone she knows is ok.  She hadn't lost anyone in the attacks. Neither had he.  They were both blessed that way.  He was a shy gentleman.  His eyes seemed to shine as he spoke to her. I could feel him gather the strength to ask courteously, "Would you like to have dinner sometime?  Just dinner.  I don't want anything from you."  Her immediate response was "Uh..."  She looked like the kind of young woman NYC news producers book on network morning news shows to give shopping tips on bargains for upscale fashion accessories and cosmetics.  Again, he said "Just dinner.  I don't want anything from you."  I pretended not to listen but, of course, I was listening.  I was waiting for the "OK. Sure."  But it didn't come.  Instead she said, "I don't know.  I don't think so."  He tried to keep a polite front but the disappointment in his eyes was obvious.  At least, to me.  Once again and with extreme gentleness, he said "Just...dinner."  Once again, she somewhat whined "Oh..I don't know" then added "I don't think it's a good idea."  I felt like shouting, "Are you crazy?  Did you not see what happened on live television September 11th?  Evil in its purest form at work.  And you turn down an offer of kindness during one of the darkest months in modern world history?  Are you turning him down just because he doesn't look like Brad Pitt or some hunky actor on Sex and the City?"  He took her smiling rejection in a very classy way.  He wished her well and continued his walk, in the opposite direction, with his dog.  I felt that he was the winner.  He attempted to connect.  After that night, I found myself hoping that he did find someone who did want to have dinner with him.

I guess that's the point of this blog entry.  Let's try to connect.  If you push away or ignore those who truly brought, bring or wanted to bring a bit of light into your life -- no matter how long -- then it's your own fault if you're lost in the dark of loneliness one day.  You had your chance.  If I was asked out to dinner on a starry September night now, my heart would be illuminated.  Learn something from Viola Davis' character in World Trade Center.  There was another non-star bit player in that movie whose performance really stood out to me.  Michael Shannon played a Marine helping emergency responders. 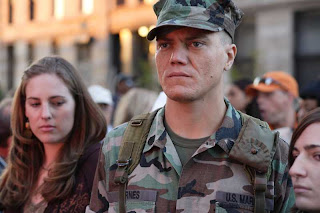 Two years later, Michael Shannon and Viola Davis were getting more critical attention than Nicolas Cage thanks to performances that made them Oscar nominees.  He was a Best Supporting Actor Academy Award nominee for 2008's Revolutionary Road.  She was a Best Supporting Actress Academy Award nominee for 2008's Doubt.
at September 10, 2012