Old stuff on THE NEW NORMAL

I must admit that I could not make it through the entire episode of NBC's premiere episode of the sitcom, The New Normal.  Talk about putting the "b" in the word "subtle."  This show just jackhammered gay into you, like Mario Cantone doing imitations of Bette Davis on The View.  Just because shows like Ryan Murphy's The New Normal are on network television doesn't mean that tired ol' stereotypes suddenly disappear.  This show has the fabulous, handsome and upscale gay white male couple in the lead roles and a "sassy black" female friend in a supporting role.  She's played by NeNe Leakes, a graduate from Bravo's popular Real Housewives of Atlanta, on NBC's cable cousin, Bravo.  That reality series featured some "sassy black" women often actin' afool. 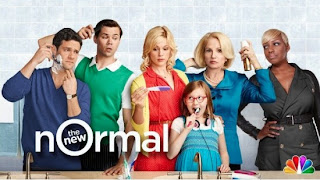 Brava, NeNe, on that booking.  Gay white men love the sassy black woman image.  Trust me, they do. But, behind the scenes, they need to start upscaling the black women they love.  Give them the lead female role instead of the "Put your hand on your hip and say 'Oh, no, you di'unt!'" supporting role.  When Will & Grace was new, I appreciated the diversity.  A single character like Grace could be played today by an ethnic actress.  Oscar winner Octavia Spencer roomed with a gay white male friend when they were both struggling performers in Hollywood.  C'mon, GWMs.  We're in an age of the globally famous TV multi-millionaire Oprah Winfrey and First Lady Michelle Obama.  Upgrade your programming view of minority women.  If two upscale gay men in a big city want to become parents, one can be played by someone like Asian-American actor/comedian Alec Mapa.  Millions of us watched him as Suzuki St. Pierre on ABC's Ugly Betty.  His one-man show, Baby Daddy, focuses on his adventures in gay parenthood with his husband.  Network television needs to tap Alec's stage show.  On The New Normal, NeNe seems to be in a sidekick girlfriend role.  The lead gay male couple wants to have a child.  Andrew Rennells from Broadway's The Book of Mormon plays the most fabulous, most looks-and-fashion conscious and -- to me -- most cartoonish half of the couple.  Does he truly want to be a parent or does he want a baby as a trendy little fashion accessory?  He doesn't seem emotionally prepared for responsible parenthood like Cam and Mitch on Modern Family are.  Will he mature?  I do not blame the actors.  It wasn't a well-written episode.  It came off quite hollow.  The gay men have a young blonde surrogate mother.  One has an older blonde prejudiced mother.  In a drama, the Ellen Barkin character would be called "racist."  On a network sitcom, she's called "outrageous." 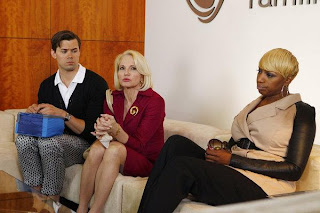 An edgier idea that would embrace Murphy's message of diversity?  Since so many black actresses, members of SAG-AFTRA, need work, he could've made the surrogate a young black single mother.  Let the "outrageous" older mother deal with that and, in time, evolve the way Archie Bunker did.  NBC does deserve a round of applause in putting this on the air.  The network has come a long way since the controversy over the groundbreaking Love, Sidney in 1981.  Tony Randall bravely starred as a middle-aged and lonely gay man who becomes a sweet friend and father figure to a single woman and her little girl.  I interviewed Randall about this show.  He was quite proud of Love, Sidney and hated how the network caved in to homophobic sponsors, eventually hiding the fact that Sidney was gay.  He was openly gay in the made-for-TV movie that inspired the 1981-1983 sitcom. 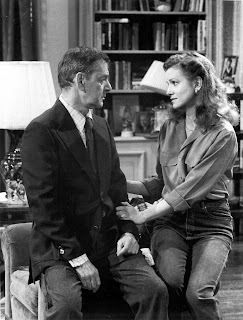 The network grew a pair and put on Will & Grace in the 1990s, a sitcom that was essentially what Caroline in the City should have been.  But Ryan Murphy's new co-creation that I saw was so overbaked and...annoying.  That's why I couldn't make it to the end of the episode.  It didn't feel fresh and hip like ABC's Happy Endings.  That show really gets it with interracial relationships and straight/gay male friendship.  Max -- the scruffy Chicago bearcub  -- was a breath of fresh gay air.  He unapologetically, boldly ate a stack o' pancakes with bacon at a diner.  He's no slave to fashion. He's a mensch. 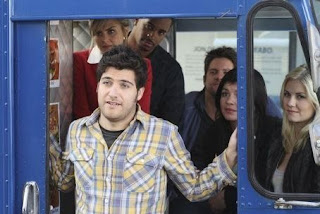 Max would rather watch a game with his straight buddies...he'd rather get a haircut from Stevie Wonder...than sit through a Sex and the City movie on cable.  And he thinks actor Dennis Farina is hot.  I love Max.  I know guys like that.  I am guys like that. 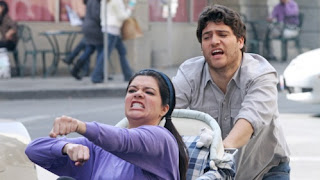 Max, like gay characters Louis C.K. has presented on his brilliant sitcom, Louie, sweetly reminds folks that we gay men can also be "just regular guys."  As I watched The New Normal, I couldn't connect to any of the characters.  The über-gay white male seemed cloned from previous Ryan Murphy product and various reality shows on network TV and cable.  The message was heavy-handed.  I did, however, dig the kid imitating Little Edie from Grey Gardens.  I'm interested to see how that NBC show grows and changes.  Let's hope it does.  By the way, if Alec Mapa is playing onstage near you...GO SEE HIM! 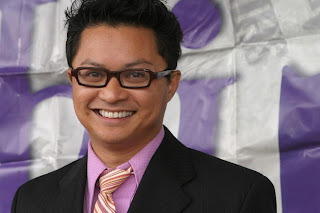 If I don't get some work soon, I'm gonna ask to be the second black male that he adopts. 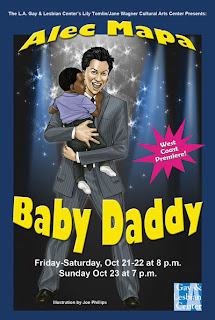