When Butterfly McQueen as Prissy nervously admits that to temperamental Southern belle Scarlett O'Hara in the 1939 classic, Gone With The Wind, she became a part of Hollywood film history.  A bittersweet history, if you will.  Given the character she had to play, Butterfly McQueen was great.  Memorable in a small role, she had a screen charisma that could hold its own opposite the galvanizing performance that rightly brought Vivien Leigh a Best Actress Academy Award for her legendary portrayal of Scarlett.  But, let's not forget that McQueen was playing a slave.  Scarlett threatens "I'll sell you" if Prissy doesn't follow orders.  Rhett Butler refers to Prissy as "a simple-minded darkie." 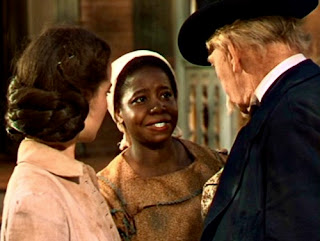 History was made when co-star Hattie McDaniel  (seen in photo below) won the 1939 Best Supporting Actress Academy Award for her work as strong "Mammy," another slave and the only female match for Scarlett. McDaniel was the first African-American to be nominated for and to win an Academy Award.  McQueen was in two of MGM's top releases of 1939.  The other was George Cukor's sophisticated comedy, The Women.  My favorite role of hers was "Lily," the friend to Ethel Waters' character in the first film directed by Vincente Minnelli, 1943's Cabin in the Sky.  Again, it's a brief role but Minnelli has her smartly attired and presents her as the best friend/confidante.  The kind of role that white actresses such as Eve Arden, Thelma Ritter and Mary Wickes built a film career doing.  Minnelli shows Butterfly in a more upscale light, as he did most of the all-Black cast. 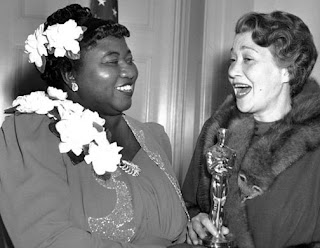 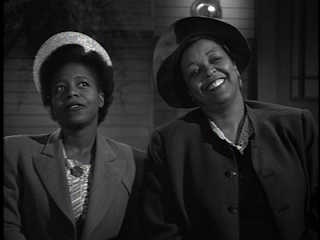 Minnelli reveals and masterfully utilizes McQueen's exquisite comic timing in a church pew scene with Ethel Waters (seen on the right in the above photo.)  McQueen's "Lily" is not a dimwit.  And she knows it.  She's a no-nonsense Christian woman.  There's a different look in her eyes in Minnelli's musical fantasy compared to that in the 1939 Civil War drama.  Butterfly McQueen had a wistfulness that could touch your heart.  We get a glimpse of that in another big David O. Selznick production, his over-ripe lusty 1946 western, Duel in the Sun starring Jennifer Jones, Gregory Peck and Lillian Gish. (Selznick produced Gone With The Wind.)  In the western, she was a maid.  She was a modern Southern California maid opposite Joan Crawford as Mildred Pierce. 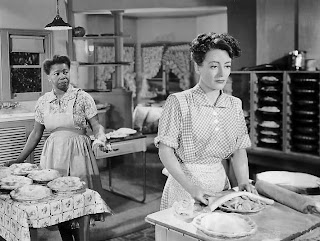 In each role, unlike some other Black actresses who played maids in that Hollywood era, McQueen gave you a little something different with each characterization.  A different sense and sensibility.  A different emotional rhythm.  A different look behind the eyes.  As an actress, she took a small role and made it her own. You remembered her when the movie was over.  In 1947, she was tired of the racial type-casting.  Tired of playing slaves and maids.  She quit films.  Racism had weighed her movie career down and kept it from climbing up the Hollywood ladder.  Only Vincente Minnelli tapped those skills that should've been utilized more in comedies and fantasies.  If Hollywood had been more liberal, I would have loved to see Butterfly McQueen play a character in another 1939 MGM classic.  With that voice and that sweet, slightly deadpan face, she would've made a delightful Glinda the Good Witch in The Wizard of Oz. 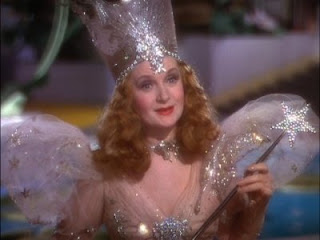 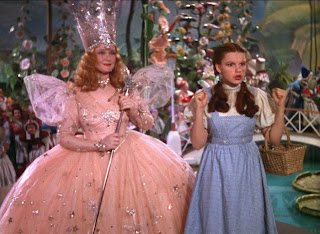 It's a shame that racism limited the film opportunities of such Black women as Butterfly McQueen, Hattie McDaniel, Lena Horne and Dorothy Dandridge.  Dandridge was the first African-American woman to be Oscar-nominated for Best Actress.  And in a hot year. She was up against Judy Garland for A Star Is Born and Grace Kelly for The Country Girl.  Even after her breakthrough musical drama work as 1954's Carmen Jones, the glamorous and talented Dandridge still crashed into Hollywood color barriers.  In the 1940s and '50s, Butterfly McQueen should've been making money doing voiceover work in animated Disney features that are now considered classics.  McQueen's Gone With The Wind co-star, 1939 Oscar winner Hattie McDaniel, appeared in Disney's rarely-seen Song of the South.  "Zip-A-Dee-Doo-Dah" was written for that Uncle Remus storybook tale and took the Oscar for Best Song of 1947.  McDaniel introduces another song, "Sooner or Later," as she plays a plantation slave who cheerfully does the cooking.


Butterfly McQueen was born on this day in history.  She died in 1995 at age 84.  For her ability to make a bit part in a movie seem much bigger than it was, for the racism she battled in her career and in her personal life, she should be remembered.  Here's a quote from the actress in her later years:


"Now I am happy I did 'Gone With The Wind.'  I wasn't when I was 28, but it's part of Black history.  You have no idea how hard it is for Black actors, but things change, things blossom in time." 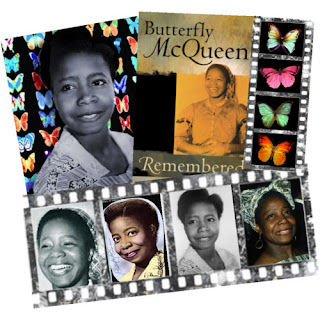