Remember this late night talk show moment with presidential candidate Bill Clinton?  Of course you do. This moment on The Arsenio Hall Show became a pop culture TV highlight of that year. 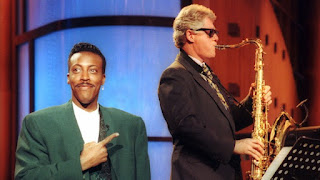 Arsenio Hall brilliantly delivered the daytime MTV audience to the late night entertainment talk show viewership in 1989.  In the magazine section of a Sunday edition of The New York Times, you would've bet that Pat Sajak would rise to be the new late night TV star.  The major write-up he got pretty much made it a sure thing that he'd have Johnny Carson-like success on CBS.  He didn't.  Why?  Because Fox gave us a totally fresh new current vibe crystallized by its comedian/actor host Arsenio Hall.  All the hot Grammy-nominated music acts you didn't see on The Tonight Show, you saw on The Arsenio Hall Show.  The Black and Latino audiences largely ignored by the Big 3 Networks were wooed and won over by Arsenio.


Today, I read the Entertainment Weekly article with news of an upcoming Arsenio Hall appearance.  He'll be in the cast for the new season of NBC's Celebrity Apprentice -- along with George Takei of TV's classic Star Trek series, Clay Aiken, comedienne Lisa Lampanelli, Adam Carolla, singer Debbie Gibson and others.  I want to see Arsenio on it.  More than that, I'd like to interview Arsenio.  Every year, there's a newspaper or magazine article about "Diversity in Television."  Maybe there's a statement from the NAACP on the low number of Black actors in new shows.  Even I've talked about that annual topic on TV.  I discussed it on the ABC News/Lifetime TV joint production, Lifetime Live.  That live afternoon show aired on Lifetime Television in 2000.  I was the film critic and, during my review of The Original Kings of Comedy, I mentioned that comedian Bernie Mac (one of the kings) was getting his own sitcom, a project rejected by the veteran three networks.  Those networks had received low grades from the NAACP in their amount of minority hires.  The Bernie Mac Show went to Fox.  His family life sitcom also went on to win an Emmy and the prestigious Peabody Award.  Arsenio broke such new ground and caused such a quake in the late night TV talk show turf that he made the cover of Time Magazine. 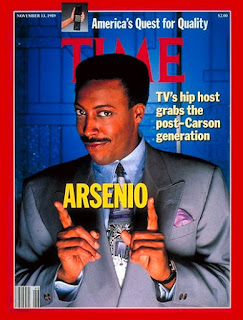 ABC, NBC and CBS did not have African-American talent hosting late night talk shows.  Fox added color and the big stars came out to be on Hall's show.  For one appearance, Madonna told the bookers that she'd go on but she'd have to go on her new gal pal, Rosie O'Donnell, then a former VH1 VJ. That appearance added zip to Rosie's rise to stardom.  The popularity of Arsenio's show ran its course and it was cancelled.  No shame.  That happens and many hosts go on to other talk show opportunities.  BUT...Arsenio Hall didn't.  And I'd like to know why.  Joan Rivers, Rosie O'Donnell, Jon Stewart, Dennis Miller, Bob Costas, Craig Kilborn and even Pat Sajak hosted another talk show after a previous one became TV history.  Kilborn was last seen in 2010 on the short-lived The Kilborn File.  In 2003, Pat Sajak had Pat Sajak Weekend on Fox News.  Did Arsenio Hall say something controversial that upset industry folks? 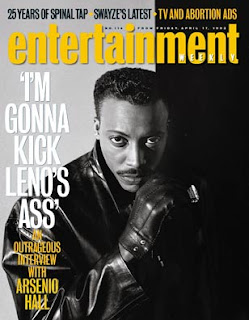 Well, Don Imus called the Black athletes on the Rutgers' women's basketball team a bunch of "nappy-headed hoes" and he went on to another big money broadcast gig. Last week it was reported that Joe Halderman, the former CBS News producer who pleaded guilty of trying to export $2 million from David Letterman, got a new gig.  He'll be working full time for the Discovery Channel documentary crime series, On the Case with Paula Zahn. Personally, when I read that, my first thought was "Dang! Who's his agent?!?!?"  Was Arsenio Hall ever offered another talk show host opportunity?  If not, why not?  He was a major player in the late night show scene.  If Pat Sajak had another shot, why not Arsenio?  There's a story in there somewhere.  The story may be something to add to the "Diversity in TV" topic.

Full Disclosure:  I had a prime time talk show on VH1 in the late '80s.  The praise it got in The New York Times was one of the best reviews I'd ever received in my career.  I had A-list guests. I got nominated for a "Best Interviewer" CableACE award and lost to Larry King.  After my VH1 years ended in early 1990, I was never ever again offered a national talk show host gig.  And I wanted another one.  I have a feeling Arsenio Hall wanted another one too.  Welcome back, Arsenio.  I hope the exposure on Celebrity Apprentice brings you other opportunities.
at January 04, 2012