"He's sending me a sailor for Christmas." 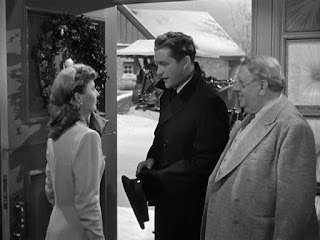 The incomparable Barbara Stanwyck said that line in one of her most delicious movies, "Christmas in Connecticut," a 1945 classic available on Warner Archive DVD.  Happy New Year.  I know that the holiday season is history come this week but this is fun viewing in a non-holiday season too.  "Christmas in Connecticut" is a light, tasty holiday comedy fueled by food.  A World War II navy hero and a very intimidating magazine publisher need a good meal.  So does food writer Elizabeth Lane.  But she needs the meal and the recipe so she can pass it off as her own.  Millions of readers think she's a Martha Stewart-type wife and mother who has earned the title "America's Best Cook."  Truth is, she can't cook.  She's not even married.  She's a single dame in Manhattan trying to make a living with her column.  But if she wants to keep her job, she's got to cook up a farm, a husband and so baby in Connecticut so she can entertain the war hero for a major feature in her magazine.  And her Manhattan publisher boss told her he'll be there in Connecticut to eat some of her celebrated cooking.  Brother, she's got to think fast. 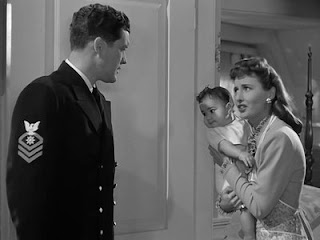 Only Stanwyck could easily and effectively switch lanes from cold-hearted film noir wife meeting her lover at a Los Angeles supermarket to plot her husband's murder to playing this lovable New York City career woman who's nearly unnerved by the business end of a skillet.  Felix the Manhattan chef, the one who really writes the recipes, must school her with a skillet in the art of flipping a flapjack.  He's played by the always dependable comic supporting actor S.Z. "Cuddles" Sakall. 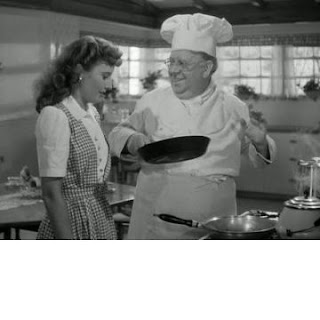 Young women who want to act in movies should study Barbara Stanwyck performances.  She developed a persona moviegoers liked.  She was tops at playing ambitious women who could beat the guys at their own game.  Women who sometimes ultimately fooled mainly themselves and tripped over their own manipulations.  You see the beginning of this image in the movie that made audiences see her star quality for the first time, Frank Capra's 1930 film, "Ladies of Leisure."  She's a 'pay-for-play' girl who poses as a model for a respectable artist.  She got deeper into the skin of that persona, playing the light and dark of it, through the years with great success.  She's funny as the "Christmas in Connecticut" magazine writer, the cardshark con artist known as "The Lady Eve," the sexy nightclub singer who teaches a shy professor how to kiss in "Ball of Fire" and the smart stripper who can solve the backstage murder mystery before cops can in "Lady of Burlesque."  Dramatically, she was the self-sacrificing social outcast of a mother named "Stella Dallas," the lethal Los Angeles housewife in Billy Wilder's film noir classic "Double Indemnity," the unwed pregnant loser who assumes a married woman's identity in "No Man of Her Own," the iron-willed heiress opposing her tyrannical ranch owner father in "The Furies" and the bordello madam in "Walk on the Wild Side." Her co-star in that 1962 film was a new actress named Jane Fonda. Her dad, Henry, was Stanwyck's co-star in the 1941 Preston Sturges classic, "The Lady Eve."  With four Best Actress Academy Award nominations to her credit and an honorary Oscar awarded to her in 1982, she received the AFI (American Film Institute) Life Achievement Award in 1987.  And that's just the film work.  I didn't even get into her award-winning TV performances.  If you can't learn great screen acting lessons from watching Barbara Stanwyck at her peak, pick another profession. 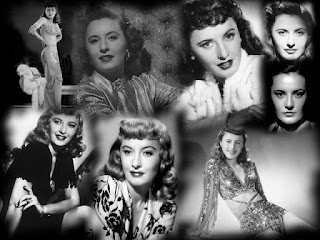 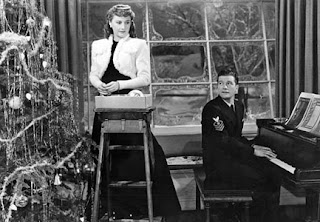 "Christmas in Connecticut" co-stars Dennis Morgan as the handsome young sailor.  The navy hero expected the food writer to be much older.  She expected...well, let's just say she didn't have great expectations and unexpectedly falls in love with him while he sings a Christmas carol.  How is she going to get this guy...pretend to be a wife, mother and a domestic goddess...and keep her job without coming off like a fraud and a floozie?  Just watch for the brisk, bright holiday merriment with Barbara Stanwyck at her best.  Even today, very few actresses could take a line like "John, dear, when you're kissing me, don't talk about plumbing" and make it work.  This comedy has become an annual DVD rental for me.  I hope you too enjoy "Christmas in Connecticut," available from Warner Archive. 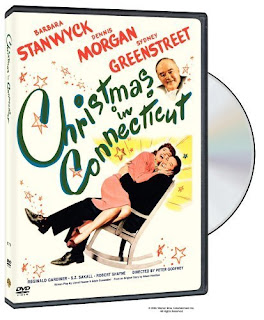