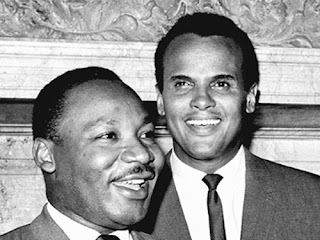 Three of the happiest, most fulfilling years of my broadcast career were the years I worked on VH1.  One of my favorite co-workers there, Sharon Kelly, did a wonderful thing.  She introduced me to the TV and film producer who gave me the backstory on the first and only live appearance of Dr. Martin Luther King, Jr. on a network late night entertainment talk show.  It was The Tonight Show.  Back then, in the 1960s, the show was hosted by Johnny Carson and came out of 30 Rock in New York City, not out of Burbank like it does now with host Jay Leno.  Sharon introduced me to Chiz Schultz.  You'll see him as "Charles" Schultz, executive producer in the credits to the 1984 film, A Soldier's Story, directed by Norman Jewison.  A Soldier's Story was an Oscar nominee for Best Picture.  Chiz used to be on Johnny Carson's Tonight Show production team.  He booked guests.  He was on staff when Carson took a week of vacation and tapped Harry Belafonte to be guest host in February 1968.  Bless Johnny Carson for that huge, bold embrace of racial diversity!  This was major to minority viewers.  In regards to the three veteran networks -- NBC, ABC and CBS -- then, as now, it was rare to see black talent host a late night talk show.  (I recently brought this up to Rosie O'Donnell who immediately responded "Arsenio Hall." I reminded her that he was on Fox, not one of the three veteran networks.)  Back in 1991, when my VH1 years were over, I was a guest host on a CNBC show called Talk Live.  I asked Chiz to come on, talk about his career and how he helped Harry Belafonte book his friend, Dr. Martin Luther King, Jr., on that famous NBC late night show. 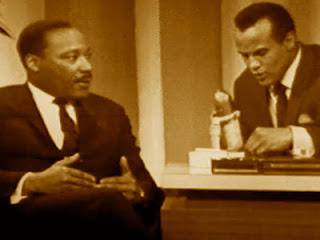 My parents stayed up late to watch Belafonte on that week.  I was a kid in school but I was allowed to stay up late to see Dr. King's appearance.  I grew up in South Central Los Angeles.  We lived just four blocks away from one of the big fires in the Watts Riots of 1965. Riots fueled by the anger of racial injustice.  Riots that made national headlines.  Riots that got Dr. King's attention. 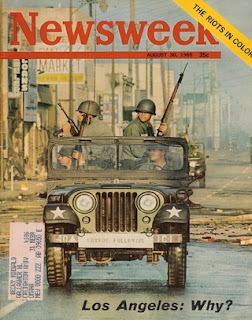 This was the community of my youth.  I grew up here.  Went to school here.  This was where my dreams of a TV career started.  This was where I started.  I read the Tom Bergeron autobiography, I'm Hosting As Fast As I Can.  We were both about the same age when we started dreaming of a career in television. But his community was much quieter than mine. 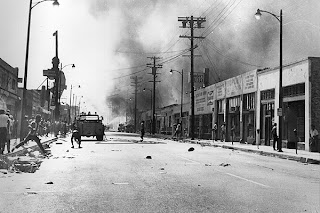 Harry Belafonte substituting for Johnny Carson on The Tonight Show made us feel so proud, so significant.  I chose broadcast as a career, determined to do the kind of TV work that black people were not seen doing in my youth -- like review movies, host talk shows and host games shows. I often hit a color wall in terms of trying to get equal opportunities. I had a hunch Belafonte had to fight network brass to get the Nobel Peace Prize recipient booked as a guest.   On the CNBC show, Chiz told me I was right.  NBC executives were very nervous about losing sponsors if King was a guest.  Keep in mind, one day in August 1963, the whole country was focused on Dr. King's historic civil rights March on Washington.  Corporate TV saw King as a political radical.  Harry had an A-list line-up that week -- Paul Newman, Sidney Poitier, Lena Horne, Zero Mostel, Sen. Robert Kennedy.  NBC execs  felt there was plenty of show biz minority presence for Harry's week.  A civil rights leader wouldn't be necessary.  Still, Chiz told me, Belafonte held his ground and got Dr. King on the show.  No sponsors were lost.  Here's another reason why I needed Chiz to come on and tell that story:  In the years to come, the Dr. King interview was credited to Johnny Carson.  Not by Carson, but by journalists.  If you saw a clip of Dr. King from that Tonight Show appearance, you saw him in an isolated soundbite.  You did not see Belafonte.  After Carson's death in 2005, NBC film critic and entertainment reporter, Jeffrey Lyons, did a network obituary feature on Johnny Carson and gave him  credit for the Dr. King interview.  Wrong.  Guest host Harry Belafonte did it and, for decades, I felt that Belafonte's accomplishment was being ignored.  As an African-American I was insulted because I'd seen the original broadcast.  It inspired my career ambitions.  Belafonte booked Dr. King and Sen. Robert Kennedy as guests that week in February 1968.  Come June 1968, both of those guests would be gone, each man taken suddenly from us  by an assassin's bullet.  America would weep.

Thank Heaven for HBO.  Last October, we got to see extended footage of Dr. King with Belafonte on NBC in its excellent Sing Your Song, a documentary on Harry Belafonte.  King's Tonight Show visit with the actor/singer/activist is included in the acclaimed feature.  Now there can be credit where credit was due.  It's a fine HBO documentary, one that should be shown in classrooms. 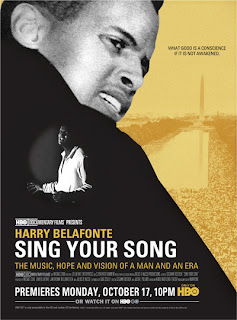 That historical week on The Tonight Show was the dawn of a new friendship.  Chiz Schultz produced a 1970 social comedy, an urban look at race and religion, starring Zero Mostel and Harry Belafonte as The Angel Levine.  Belafonte plays a Jewish angel named Alex Levine.  I'm so glad Sharon Kelly introduced me to Chiz.  I'm so grateful that we can, once again, see rare footage of Harry Belafonte interviewing Dr. Martin Luther King, Jr. on NBC. 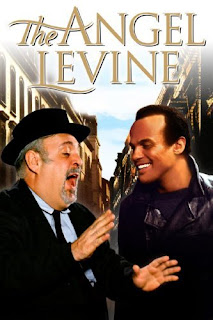