On JULIA SCOTTI -- FUNNY THAT WAY

The documentary begins. Julia speaks. She was married. Became a parent. Had a show biz career in stand-up comedy that was going pretty well in the 80s and early 90s. Then Scotti decided to make a change and start a new life at 50 -- as a woman. Julia Scotti is a transgender American. June is PRIDE month and JULIA SCOTTI -- FUNNY THAT WAY, directed by Susan Sandler, is a release worth seeing. With home movies, family photos, archive comedy club footage -- before and after her transition -- plus revealing interviews of Julia and her adult children show us a different side of a member of our trans community. Via Julia's personal and professional journey, director Sandler presents us with fresh insights that may not have occurred to straight people and us gay folks. 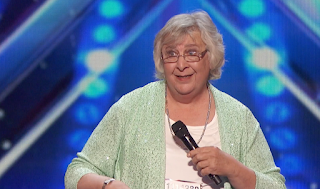 For instance, there's the Easter aspect of the transgender transition. The body in its original form no longer lives, then there's a rebirth and emotional resurrection. The person's true spirit is illuminated because the person has come to her or his real truth. You'll see that Rick Scotti was a warm, likeable comedian who did funny if somewhat generic material. In those days, there was minimal representation of openly gay talent. If anything, rejecting a gay man's harmless, casual flirt with a macho verbal insult was a comedy staple in some comedians' routines. Rick Scotti poked fun at gay men even though he was closeted and dating men on the down-low. Frankly, entertainers were afraid of coming out in those days for fear of losing employment. And their fears were justified. As Julia Scotti, a comedian very well into her AARP years, her material is funnier, more specific and fresher as it shoots down ageism and homophobia. I think she'd be perfect to do featured roles on episodes of ABC's THE CONNERS. Julia spoke her truth in her stand-up comedy club act during the dark years of the Trump administration. But explaining her transition to the two very young people who knew her as "Dad" was not at all easy. Here's a trailer.
At the heart of this 1 hour and 10 minutes long documentary is the message to have the courage to come to your own truth, heartbreaking though it may occasionally be. It's about being truthful -- and kind. Julia is not a transgender star like actress/advocate Laverne Cox. Julia has to drive herself to her own gigs as opposed to relaxing in the backseat of a deluxe car as she's driven to her location in a ride provided by those who hired her. I think her non-star status gives this documentary a nice working class relatability. Julia will touch your heart and make you laugh. Julia is definitely someone we should know -- and director Susan Sandler gives us that sweet opportunity in JULIA SCOTTI -- FUNNY THAT WAY.