There's no denying that Judy Garland was one of the greatest stars to come out of Old Hollywood. 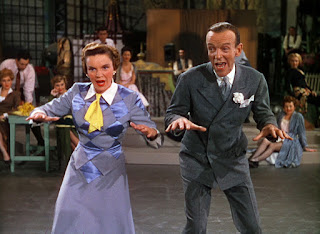 With her amazing natural gifts as a singer, dancer and actress, she was so talented that it was almost frightening. From the time she was 13 and under contract to MGM...to 1950 when she was in her late 20s and dropped by the studio, Judy was featured and starred in more musicals than three musical stars who won the Best Actress Oscar have made in their entire film careers -- Julie Andrews (MARY POPPINS), Barbra Streisand (FUNNY GIRL) and Judy's daughter, Liza Minnelli (CABARET). Judy's MGM movie musical credits included BROADWAY MELODY OF 1938, THE WIZARD OF OZ, STRIKE UP THE BAND, BABES ON BROADWAY,  FOR ME AND MY GAL, GIRL CRAZY, PRESENTING LILY MARS, MEET ME IN ST, LOUIS, THE HARVEY GIRLS, EASTER PARADE and SUMMER STOCK. With a voice that seemed to be a golden gift from the gods, she wowed the critics in a spectacular movie comeback. She not only sang but also showed her heartbreaking dramatic depth in a 1954 musical remake of A STAR IS BORN for Warner Bros. The performance brought her a Best Actress Oscar nomination. 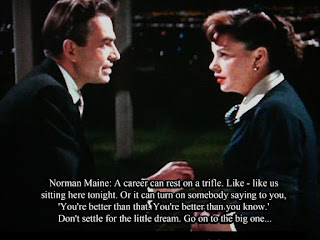 As an unknown singer with a big band who is later discovered by and falls in love with a fading top Hollywood star (played by James Mason), Judy introduced the song "The Man That Got Away."

Judy was the favorite to win the Oscar, but she lost to Grace Kelly for THE COUNTRY GIRL. Harold Arlen and Ira Gershwin's "The Man That Got Away" lost the Best Song Oscar to the title tune from THREE COINS IN THE FOUNTAIN,

You didn't see Judy in the big all-star 1960 movie, PEPE. You hear her sing on a radio while Shirley Jones and Dan Dailey dance to her vocal. Judy Garland sang this Andre and Dory Previn tune to a Best Song Oscar nomination.

You didn't see Judy in 1962's GAY PURR-EE either. It's an animated feature from Warner Bros. about two cats in Paris who have a romantic adventure. Judy Garland and Robert Goulet supplied the voices for the lead furry characters. GAY PURR-EE had an original score of songs by E.Y. Harburg and Harold Arlen, the two men who wrote all the songs for THE WIZARD OZ.

When Judy Garland was 13, before her on-screen duties under her MGM contract really kicked in, the studio loaned her to 20th Century Fox to do a few featured numbers in the college football musical comedy, PIGSKIN PARADE, released in 1936. This was Garland's feature film debut.

In detailing 1954's A STAR IS BORN for a films on TV book, I believe it was film critic and historian Leonard Maltin who wrote that Judy Garland's voice is one of the most enduring sounds of the 20th century.