IT'S ALL ABOUT RITA MORENO

Absolutely fascinating. Those are two words that describe award-winning actress Rita Moreno and the new documentary about her.  From Roadside Attractions, it's RITA MORENO: JUST A GIRL WHO DECIDED TO GO FOR IT. The documentary, with on-camera commentary from the very attractive veteran star, succeeds in showing us that there is so much more to her career and life than WEST SIDE STORY on the movie screen and THE ELECTRIC COMPANY on the TV screen. She's been a groundbreaking dancer, singer, actress and avid social activist. The documentary takes us back to the Hollywood politics when she began her film career in the 1950s up to her passionate concern about national politics we've experienced in the last five years. 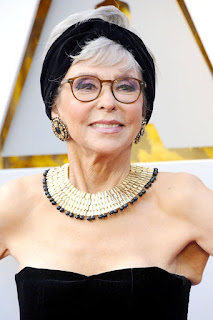 To Rita, leaving her beloved Puerto Rico with her mother to relocate to New York was like a "reverse Oz." Her island was colorful, musical, tropical. The boat ride was miserable and so was the winter in New York when they arrived. But life changed for teen dancer Rita Moreno when she made an impression on visiting MGM movie studio head, Louis B. Mayer. He put her under contract. 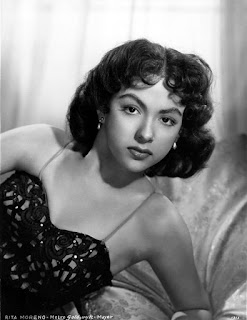 She has survived Hollywood racism, Hollywood sexual harassment, an emotionally abusive romantic relationship with Marlon Brando that drove her to a suicide attempt, a long lack of employment after she won the Best Supporting Actress Oscar for WEST SIDE STORY and she's pulled off some fabulous show biz comebacks on Broadway and TV. She's warm, astonishingly honest, wise, candid, touching and hysterically funny. While showing us her large, comfortable home in the San Francisco area, she describes something on her grounds as looking like "an elephant penis." That is the larger-than-life and resilient Rita Moreno.

Norman Lear and Lin-Manuel Miranda are the executive producers and it's obvious they spent good money to give this production class.

We see several clips of Moreno's early and frustrating film career. She had to work hard to make something of the similar "native girl" or "Latina spitfire" roles she was constantly assigned. Occasionally she got to show something different -- for instance, her 1920s flapper movie star role in the 1952 MGM classic, SINGIN' IN THE RAIN and Fox's minor 1956 comedy, THE LIEUTENANT WORE SKIRTS. In that, she does a spot-on imitation of Marilyn Monroe's character from THE SEVEN YEAR ITCH. She landed a minimal supporting role in the Oscar-winning Fox musical adaptation of Rodgers & Hammerstein's THE KING AND I. Moreno tells us that the role of the Asian slave girl in the 1956 film didn't give her much to play as an actress. Yul Brynner, the star of the movie, agreed.

In regard to how Hollywood treated actors of color, consider this info you won't hear in the documentary.  Dorothy Dandridge made history as the first Black woman to be an Oscar nominee for Best Actress. A huge achievement. The film was 1954's CARMEN JONES. The next role she was offered was the minimal role that eventually went to Rita Moreno in THE KING AND I. Dandridge was advised not to take such a tiny, one-note part after her groundbreaking CARMEN JONES performance. The Black actress did not have another Hollywood film lead role offer for five years after her Oscar nomination. Moreno won her Oscar for WEST SIDE STORY, Oscar winner for Best Picture of 1961, and she had no good Hollywood offers for seven years afterwards. Hollywood had no work for a Latina star. Today, there is still Latinx underrepresentation in Hollywood. Eva Longoria, Gloria Estefan, Hector Elizondo and Lin-Manuel Miranda tell us why seeing Moreno onscreen was so significant to them. Other guests who provide observations and comments are Norman Lear, Morgan Freeman, Whoopi Goldberg and Mitzi Gaynor.

I read Moreno's delightful memoir. In the documentary, she expands on some topics she brought up in the book. Her disgusting encounter with Harry Cohn, the head of Columbia Pictures studio, and some of his Hollywood pals is an example. On-camera, she accurately describes Cohn as "vulgar and crude." It's no surprise that Moreno is a strong supporter of the Me Too movement,

From being near Dr. Martin Luther King at the historic 1963 March on Washington to working with the Muppets to receiving a Presidential Medal of Freedom from President Barack Obama, Rita Moreno has remained remarkable -- and relevant -- as she approaches 90. Trust me on this, RITA MORENO: JUST A GIRL WHO DECIDED TO GO FOR IT is one of the best 2021 features you'll see. She is a living lesson on perseverance, passion and having the courage to find your self-worth.

I'm sure you know she has a supporting role in Steven Spielberg's upcoming remake of WEST SIDE STORY. Rita turns 90 in December...the day before Spielberg's remake opens.