My affection for Rosemary Clooney began when I was a little boy in Los Angeles. She'd sing on TV shows and I'd hear her records on the radio. The silvery lilt in her voice and the way she caressed lyrics made me swoon.

I started my broadcast career in Milwaukee after I graduated from Marquette University there. I met Rosemary Clooney in the 70s when she was in town for a week during a tour of a popular revue show called 4 GIRLS 4. I was a cub reporter for a local FM radio station and attended an opening night press function. We met and, later in the week, went out for some BBQ ribs. In the 80s, when I was working in New York, I interviewed her on live TV. She invited me to her show at the Rainbow Room and she told me to drop by her dressing room after the show. In 1997, when I was introduced to George Clooney, he smiled and said, "Aunt Rose told me about you."

Rosemary Clooney was a lovely, warm, witty, down to earth person. 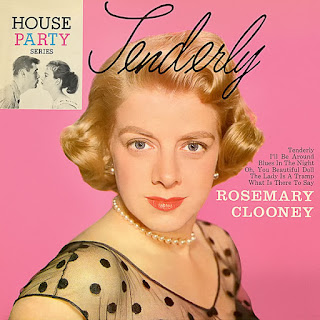 When I was in college, I discovered her recording of "We'll Be Together Again." It was like discovering gold. Take a listen.

One of the highlights of 1954's WHITE CHRISTMAS is her torch number, "Love You Didn't Do Right By Me." Future WEST SIDE STORY Oscar winner, George Chakiris, is one of her chorus dancers.

I love the album Rosemary Clooney cut with Duke Ellington, She did his songs justice. Here's "Me and You."