May 10th. The extraordinary dancer, choreographer, actor, singer Fred Astaire was born on this day in history. As any member of my immediate family can tell you, my fascination with him began early in my grade school years. I was dazzled by and often healed by Astaire's work. There has never been a hurt, a heartbreak or sorrow in my life that could not be relieved to some degree by watching a Fred Astaire musical. When I was a kid, I went to our nearest library branch in South Central L.A. and checked out books about musicals -- books with chapters about him -- and I felt as if I'd struck gold in California when I found his autobiography, STEPS IN TIME. The Fred Astaire and Ginger Rogers RKO musicals that aired frequently in those days on local Channel 9 (which was KHJ TV then and connected to the RKO film library) moved me to beg my parents to let me take dance classes. They said "no." They felt I was too obsessed with old movie musicals and needed to go to summer camp or join the Boy Scouts. Well into my adult years, Astaire was still special to me. And an inspiration. He kept working and stayed relevant. He did multi-Emmy winning music specials on NBC with Barrie Chase in the 1960s, he acted in episodic TV, starred in made-for-TV movies, joined the cast of ABC's IT TAKES A THIEF series starring Robert Wagner in the late 1960s, did voiceover work in animated Christmas specials, did a lot of network TV host work, was a guest on talk shows and continued to accept an occasional feature film offer. Astaire still dazzles me. 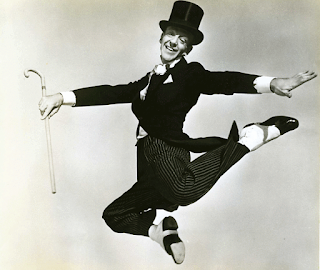 There's a popular pop culture quote that "Ginger Rogers did everything Fred Astaire did -- only backwards and in heels." The quote has been attributed to the late Ann Richards, former governor of Texas. I believe I heard Linda Ellerbee of NBC late night news say it on one of her news shows months before Ann Richards did.

Musicals are hard work. They're like a triathlon with a downbeat. You have to dance, sing and act. Astaire and Rogers truly were an iconic dance team and they did some of their best screen acting in those dance numbers. They acted the emotions of the lyrics in the songs written for them, they reacted to the lyrics and they were in the moment when it came to the scene. 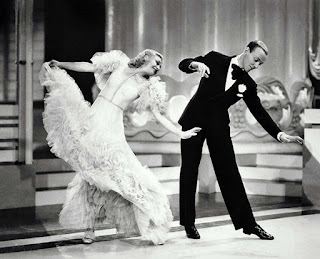 With all that in mind, it's long stunned me that Fred Astaire and Ginger Rogers each was nominated for just one Oscar in their long, illustrious careers -- and the nominations were for dramatic films. Ginger Rogers deservedly won the Best Actress Oscar for 1940's KITTY FOYLE. I would've also given her Oscar nominations for SWING TIME (1936) STAGE DOOR (1937) and Billy Wilder's THE MAJOR AND THE MINOR (1942).

SWING TIME (1936) directed by George Stevens. Original songs by Dorothy  Fields and Jerome Kern. Astaire plays a dancer who likes to gamble -- and he's a very lucky gambler. In New York City, he flirts with and falls for a disciplined, no-nonsense, working class career girl. She's a dance instructor determined to make good in Manhattan as a dancer. Astaire's character pretends to need dance classes just so he can talk to her again after she initially brushed him off. He will help make her dreams of career upward mobility come true. The "Pick Yourself Up" number is terrific in this, one of their best musicals.

CAREFREE (1938), directed by Mark Sandrich. Original songs by Irving Berlin. Astaire plays a psychiatrist. Rogers plays a radio star, a new patient, who's engaged to a real dork but falls for the psychiatrist. Eventually, he falls for her but tries to hide his real feelings. When she's on the brink of marrying the dork, he hypnotizes her so they can both express their true mutual affection. This is the dance to Irving Berlin's "Change Partners."

Ginger Rogers unequivocally deserved equal billing, equal pay and equal benefits. Nonetheless, the "Change Partners" dance shows that Ginger didn't do "everything" Fred did -- only backwards and in heels.