1961. Universal releases the musical comedy, FLOWER DRUM SONG, adapted from the hit Rodgers & Hammerstein Broadway show of the same name. The movie, with its predominantly Asian-American cast, starred Miyoshi Umeki. She was the leading lady in the Broadway show, directed by Gene Kelly, and reprised her role for the Hollywood production. Umeki had won the Best Supporting Actress Oscar for the 1957 drama, SAYONARA, starring Marlon Brando. For three seasons that started in 1969, Miyoshi Umeki would gain even more popularity as "Mrs. Livingston" on the ABC sitcom, THE COURTSHIP OF EDDIE'S FATHER. Onscreen with Miyoshi Umeki in FLOWER DRUM SONG were Nancy Kwan, James Shigeta and Jack Soo. 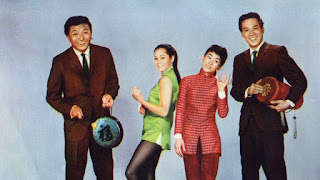 There's someone else in the cast. Although her name is not listed in the credits, she's featured in two dance numbers. Her name is Cherylene Lee. I know that because Cherylene and I were buddies in our high school years. We met at a 1969 summer camp experience called "Camp Brotherhood Anytown." The National Conference of Christians and Jews sponsored the camp to bring Southern California teens of different races and economic backgrounds together to interact, dialogue and find common ground. A few of us guys from the same high school in Watts attended. One of the fellow campers was Cherylene Lee, a show biz kid. We met and chatted a lot. I was in awe when she told me that she was in FLOWER DRUM SONG and had performed choreography by Hermes Pan, Fred Astaire's best friend and top choreographer. Pan choreographed the classic Fred Astaire & Ginger Rogers RKO musicals of the 1930s. I was fascinated with Cherylene. Cherylene was thrilled I knew who Hermes Pan was. 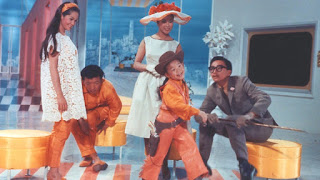 We kept in touch after camp. I saw her dance in a Los Angeles fine arts special that aired on local TV. She made me laugh telling me about her experiences being in the chorus of a new Meredith Willson musical in try-outs at the L.A. Music Center. The show was called 1491 and focused on Christopher Columbus a year before he sailed off to discover a new world. Chita Rivera starred as Columbus' mistress.

Cherylene and I were two high school kids who. long before graduation, knew that we wanted to pursue careers in the entertainment industry. We also realized that we were people of color and, because of that, the playing field of film, theatre and TV might not be level for us. We talked a lot about diversity and inclusion. We hoped that we would get equal opportunities when we got older.

Young people of color have the same hopes today. The conversation about the need for diversity and inclusion continues.

Here's a number Cherylene Lee did in FLOWER DRUM SONG. She's the cute little one -- the youngest of the three kids.

She was a talented actress, dancer, writer and an Asian-American activist. She was also a proud Screen Actors Guild-AFTRA member. We lost her to breast cancer in 2016.