Fassbinder Was An ENFANT TERRIBLE

From what I read about the acclaimed independent German filmmaker Rainer Werner Fassbinder, a famous description of Lord Byron could also be attached to him. He was "mad, bad and dangerous to know." 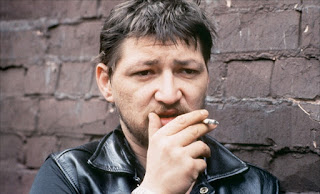 Before 1982, when cocaine and barbiturates ended his life at age 37 in Munich, Fassbinder was amazingly prolific as a feature filmmaker and actor, a playwright, a theatre director and an essayist. Themes of class, race and politics were a thread in his films. A gay man, he boldly addressed gay and lesbian themes in his movies. I first became aware of his foreign films when I lived and worked in Milwaukee. This was the late 70s and early 80s. I lived on the East Side, known as the "artistic" and avant garde part of town. When Fassbinder films played at a local revival theater, they drew good crowds and were popular with us gay men. We were fascinated with his frank depictions of gay life and, frankly, with his occasional shots of full frontal male nudity. I was also fascinated with the wide relatability of his movies. His 1975 drama, FOX AND HIS FRIENDS, showed the caste system that exists in gay male life. Fassbinder played the working class Fox. That story could've easily been set in Milwaukee or San Francisco. Fassbinder had a respect and fondness for the working class, the under-privileged, the outsiders. 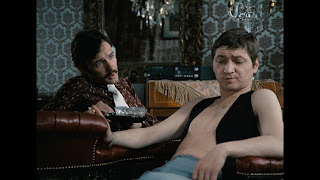 Now playing in theaters, thanks to Dark Star Pictures, is a biopic on the late director entitled ENFANT TERRIBLE. This subtitled feature has actor Oliver Masucci as the complicated, debauched, talented artist. Masucci delivers a performance full of fury, pain and manipulation. His transformation into the unkempt, beer-bellied, often belligerent Fassbinder is impressive. The German actor is quite well-cast in the role. This biopic is shot like a 1970s Fassbinder film.

ENFANT TERRIBLE opens with Fassbinder as a stage director in the 1960s. As he says, "I like to provoke." He's interested in telling stories about class, dreamers and dreams being shattered. His goal is film work. He idolizes classic film directors Orson Welles, Douglas Sirk and Jean-Luc Godard. We're with Fassbinder through his film career as he casts and directs 1974's ALI: FEARS EATS THE SOUL to 1979's THE MARRIAGE OF MARIA BRAUN, 1982's VERONIKA VOSS and the making of his last film, 1982's QUERELLE, starring Brad Davis (of MIDNIGHT EXPRESS), French great Jeanne Moreau and Franco Nero. 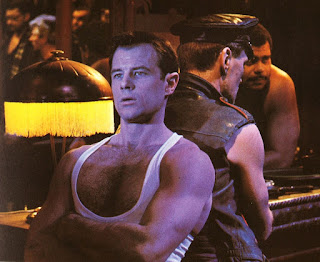 Fassbinder didn't just work outside the margins, he burned the margins down. As he also says in the movie, "Nobody owns me." Oliver Masucci definitely plays that aspect of the artist. However, the Klaus Richter screenplay spends so much time following Fassbinder on his frequent visits to gay bars for sex and possible actors to cast in his films, so much time showing him as a verbally and physically abusive lover, so much time showing him drinking and and snorting coke that you find yourself saying "This guy was a prolific filmmaker and essayist? This guy became one of Germany's most important directors? He's a hot mess!" To see a trailer for ENFANT TERRIBLE, click onto this link: 👇

I wanted to know more about what inspired him to attach to the themes he did in his movies, how being gay affected those post-World War 2 Germany images and how his manipulations as a director affected the lives and careers of his actors. I wanted to see his stretches of focus and discipline in which he was sober, prolific and earned the high critical praise that he got in his film career. I wanted to see what dreams of his were shattered.

Fassbinder loved Orson Welles. Think of CITIZEN KANE. We saw Charles Foster Kane focus and do the work that made him a famous and wealthy figure. We saw his bad behavior during his career. We also saw what dreams of his were shattered and how that made him become the Citizen Kane we knew. ENFANT TERRIBLE needed that kind of balance.