When I was a youngster, PERRY MASON was regular Saturday night TV entertainment. Mom and Dad loved that CBS courtroom drama.  Stocky, handsome Raymond Burr had the title role as the defense attorney who never lost a case for years in prime time. Burr was one of those veteran movie actors who went to TV in the 1950s and 60s. The small screen made him more famous and a brighter star than the big screen ever had.  Lucille Ball, Robert Young, Robert Stack and Buddy Ebsen were in that same category. When I heard that a new version of PERRY MASON would premiere on HBO with actor Matthew Rhys in the lead role, I wasn't all that interested -- even though Rhys is one gifted actor. 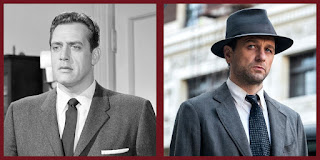 My first thought was "How does this guy from the United Kingdom keep getting roles where he plays an American?" Remember back in 2006 when he played one of the Pasadena siblings in the ABC TV series called BROTHERS & SISTERS? Sally Field starred as the mother. Then he played one of the Russian agents posing as a Yank in THE AMERICANS on cable. On the big screen, he played Chicago native Daniel Ellsberg, the man who gave the Pentagon Papers to the Washington Post, in Steven Spielberg's newspaper drama, THE POST, starring Tom Hanks and Meryl Streep. Well, I watched the first four episodes of PERRY MASON on HBO. Matthew Rhys is, once again, excellent. All four episodes were excellent. I watched them twice. 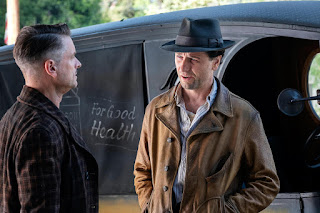 This series delves into the Perry Mason backstory/ In the beginning, you think it has nothing to do with the Erle Stanley Gardner characters some of us remember from the hit CBS drama. Perry is a private investigator, a clever guy but a hot mess of a man. He's unkempt. He drinks too much. He witnessed the horrors of war when he served in World War 1 on the battlefield. He admits to having had one homosexual encounter. He's in need of money.  This story takes us back to Los Angeles in the early 1930s. People are still unemployed from the Great Depression. In L.A., there's a big news story. Newspapers report that a baby has been kidnapped and murdered. There's an arrest and some shady local politics. There's also an Aimee Semple McPherson evangelist whose hordes of followers keep her in the celebrity spotlight and bring lots of cash into her church coffers. She's a controversial character who gets tied into the kidnap/murder story. Perry Mason is a private investigator working on that case.

Let me tell you this: If you loved the classic movie CHINATOWN, I think you'll totally dig this series. That same feeling of darkness and decay dwelling underneath the relentless Southern California sunshine is at play in HBO's PERRY MASON. Guilt is a driving force in these episodes. Here's a trailer.


I've been a John Lithgow fan ever since I saw him as the egotistical, backstabbing Broadway producer in 1979's ALL THAT JAZZ. Lithgow was one of my favorite guests on my VH1 prime time celebrity talk show in 1988. He was the first celebrity guest who sent me a thank you note after our show. I still have it. John Lithgow's performance as Winston Churchill in Netflix's THE CROWN left me awestruck. He was stunning. His performance as Perry Mason's boss is just as terrific.

On the classic TV series, Barbara Hale played Della Street, Perry Mason's whip-smart and trustworthy secretary. I loved her backstory in this miniseries. I loved how she was played by Juliet Rylance. On TV, you always got the feeling that Perry Mason and Della Street were the best of friends. One of the most fascinating element about the scripts in the first four episodes is that you don't think this hot mess of man who's a private investigator will have any resemblance at all to the famous Raymond Burr portrayal. But, with each episode, you realize that you are being set up to see how these 1930s characters became the ones known from the 1950s/60s TV series. Episodes were directed by Timothy Van Patten. He directed many memorable episodes of THE SOPRANOS.

Here's some Old Hollywood history for you. Did you ever see the gorgeous, statuesque actress Gail Patrick in the classic films MY MAN GODFREY (1936), STAGE DOOR (1937) and MY FAVORITE WIFE (1940)? 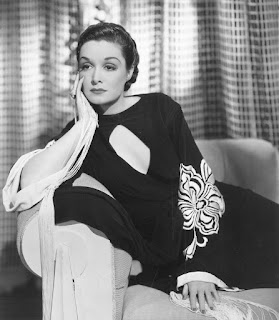 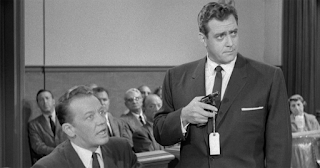