Once again, I am writing about the remarkable Diahann Carroll. The late star was born on July 17th in 1935. On her July 17th pop news segment in the second hour of GOOD MORNING AMERICA, entertainment anchor Lara Spencer acknowledged Carroll's birthday and legacy by showing a very short clip of her in an episode of DYNASTY followed by Kerry Washington and a fellow former SCANDAL castmate reenacting the same exact clip scene. Lara Spencer read a quote from Kerry Washington in which Washington graciously thanked the star of DYNASTY and, years before that, JULIA, for being a trailblazer who opened the door for other Black actresses on TV. If I had the job on GOOD MORNING AMERICA that Lara Spencer does, I would've reminded viewers that the singer/actress was a trailblazer long before DYNASTY in the 1980s. 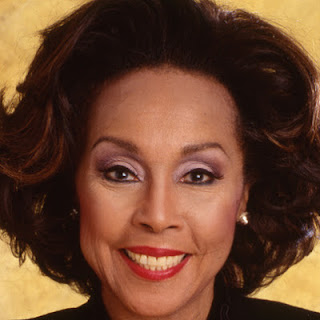 This year's headlines about race made the issues of inequality and discrimination hot topics that are being discussed -- and have been in need of serious, deep discussion for quite some time. In the entertainment industry, more intense attention is being paid to the lack of racial diversity and inclusion in the arts. Diahann Carroll worked with the late, great Dorothy Dandridge in 1954's CARMEN JONES. That musical drama made Dorothy Dandridge the first Black woman to be an Oscar nominee for Best Actress and the first Black performer, male or female, to be an Oscar nominee in the "Best" category. However, after she made history with her dazzling performance in 1954's CARMEN JONES, Hollywood did not have another lead role script opportunity for Dorothy Dandridge until 1959's PORGY AND BESS. Diahann Carroll was also in the cast. PORGY AND BESS was Dandridge's last film. Look at CARMEN JONES today and ask yourself, "How could Hollywood not have had any other lead role offers for her after that Oscar nomination?" Such is the plight of performers of color -- a plight that white film critics and entertainment reporters never dug into and investigated. Rita Moreno was a guest on cable's TCM (Turner Classic Movies) and stated that she had no film work for seven years after she won the Best Supporting Actress Oscar for 1961's WEST SIDE STORY. Like WEST SIDE STORY, Martin Ritt's PARIS BLUES was another film that came out in 1961, a year of America's Civil Rights movement. This romantic drama has a boldness that's almost subliminal. Diahann Carroll, Sidney Poitier, Paul Newman and Joanne Woodward starred as four Americans in Paris. 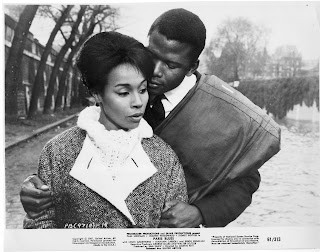 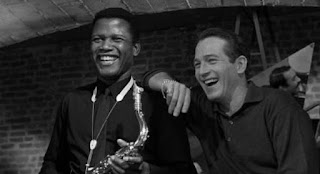 Newman and Poitier are best friends, jazz musicians making the scene in Paris. Poitier is a music arranger/composer, a most upscale role for a Black actor at that time. Woodward and Carroll play best friends on vacation. The four Americans meet and become friends. Romance and music ensue. Louis Armstrong gets a sophisticated role as a respected jazz legend on tour. Duke Ellington received an Oscar nomination for his music score. 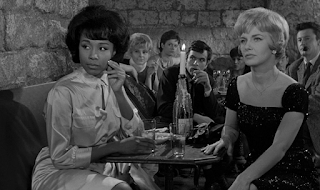 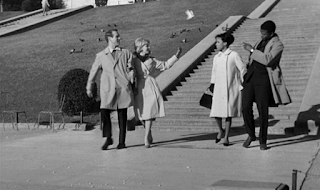 In the opening minutes, the camera pans the crowd in a Parisian jazz club. We see that the club is a place where interracial relationships and same-sex romances can exist in harmony. Diahann Carroll and Sidney Poitier play sweethearts. She wants to return to America after vacation and support the Civil Rights movement. He's initially reluctant. He's treated with respect in France. Poitier's character said something similar to what I often heard Dad say about when he served in World War 2. He told me that white people in France called him "Sir" before white people in America did.

Two of the most famous names in Broadway history gave us musicals that were adapted into A-list Hollywood films. Onscreen saw Rodgers & Hammerstein's OKLAHOMA!, Rodgers & Hammerstein's CAROUSEL, Rodgers & Hammerstein's THE KING AND I, Rodgers & Hammerstein's SOUTH PACIFIC, Rodgers & Hammerstein's FLOWER DRUG SONG and Rodgers & Hammerstein's THE SOUND OF MUSIC. Two years after the death of Oscar Hammerstein II, Richard Rodgers went solo and gave Broadway a timely 1962 musical called NO STRINGS. In the story, a top fashion model who's Black and from New York works and lives in Paris. She has a quality of career opportunities and income she probably would not have back in America. She meets another American visiting Paris. He's a white novelist, a Pulitzer Prize winner, who's been stalled by a severe writer's block since he arrived in France. The model challenges his writer's block. But can the freedom and acceptance of their romance in France survive if they take it back home to the States? He wants to return home to New England. They face the fact that, until America changes, they'd have no romantic future there and must part. Keep in mind this was a 1962 musical. Interracial marriage was still illegal in some American states. The Supreme Court would make it legal all across the country in June 1967. Dr. Martin Luther King's historic March on Washington for Civil Rights, which Diahann Carroll attended, would be in August 1963. 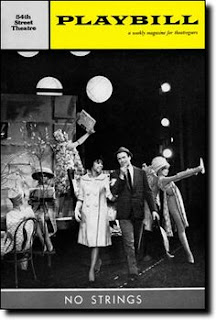 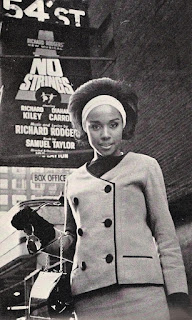 For her performance as fashion model Barbara Woodruff in NO STRINGS, Diahann Carroll became the first Black woman to win the Tony award for Best Actress in a Musical. Decades before DYNASTY on ABC, years before Diahann Carroll, like Dorothy Dandridge, got a Best Actress Oscar nomination (thanks to 1974's CLAUDINE), she was a groundbreaker on Broadway. Here's Diahann Carroll as fashion model Barbara Woodruff singing about her sweet independence abroad in Richard Rodger's NO STRINGS. The song is "Loads of Love."

Her leading man in NO STRINGS was singer/actor Richard Kiley. Kiley was in the 1953 film noir, PICKUP ON SOUTH STREET, and played one of the high school teachers in the hit 1955 drama, BLACKBOARD JUNGLE. Here, he and Diahann Carroll sing what became the hit song from the score of NO STRINGS. The song is "The Sweetest Sounds."

Paris. The colorful world of high fashion. The lead female character who's from New York. Romance. Showtunes. Those are elements that made FUNNY FACE, the classic 1957 film starring Fred Astaire and Audrey Hepburn, such a delicious musical. But did Hollywood make a move to star Tony winner Diahann Carroll in a film version of her Broadway hit, a show that had those same elements as FUNNY FACE? No. 1962's NO STRINGS had an interracial romance. Even though the prestigious name of Richard Rodgers was attached to the project, Hollywood did not give us a deluxe movie version of a Tony-winning Broadway musical with a Black actress in the glamorous lead role.

That is a damn shame. 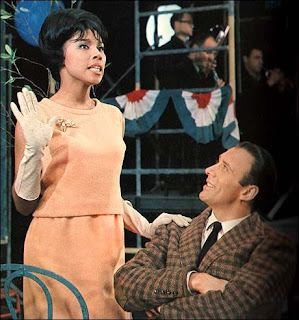