To a degree, you could call this new romantic comedy GAYS OF OUR LIVES. Why? Because the gay male couple in ALMOST LOVE is played by two gay male actors. That may not seem like big news nowadays. But, believe me, it does show a tidal wave change in the entertainment industry. Attached to that is the casting of comedian/actress Michelle Buteau in a lead role. We're looking at 30-something couples trying to keep romance alive in their New York City lives. The main question seems to be "Is this really love in our relationship or is it sorta kinda like love?" I've followed Michelle Buteau's work ever since I met her after watching her comedy set one night in New York City about ten years. She's not just a good comedian, she's a good actress too. She's been steadily proving to be an MVP (Most Valuable Player) in such quality projects as the delicious Netflix rom-com, ALWAYS BE MY MAYBE, and in the 2019 wrap-up episodes for TALES OF THE CITY. 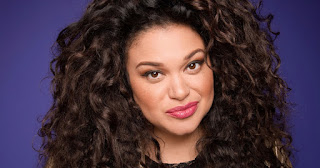 As Cammy in ALMOST LOVE, we see more of her impressive acting skills. Yes, she gets funny lines to say. However, director Mike Doyle wisely lets us see her react to the other actors and the situation of the moment be it funny or serious. Notice the emotions that wash over her face. I wish director/writer Nora Ephron was still alive to give Michelle Buteau a juicy, bigger role in one of her golden, polished rom-coms. Cammy in ALMOST LOVE is dating a man who's lived in a homeless shelter. Proof of his extensive homeless shelter residency comes in the no-nonsense way he eats. If they are dining in a restaurant with friends of hers, he is not too proud to ask for the leftovers to go -- even if the leftovers aren't his. He's smart, he doesn't really embarrass Cammy in public, he respects her belongings in her apartment and they seem to have a frisky sex life. But she's dissatisfied. Does dating him mean she lacks self-esteem or is she being a class snob because he's unemployed? 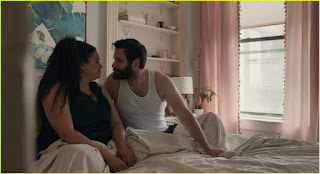 There's also dissatisfaction within the seemingly perfect relationship of Adam and Macklin. Macklin, very well-played by Augustus Prew, is a high-profile social influencer in the world of men's fashions on the internet. He's the kind of guy who would be a men's fashion contributor on GOOD MORNING AMERICA. His equally sweet partner of five years, Adam, is not as high-profile and not as well-paid. Remember Kathy Selden, the Debbie Reynolds character in the classic musical, SINGIN' IN THE RAIN? She dubbed the speaking and singing voice for that self-centered, irritating and squeaky-voiced star, Lina Lamont, when the new 1920s technology of sound suddenly made silent films a thing of the past. Adam works in the art world. He's a talented painter. But he's the Kathy Selden of the New York City art scene. He paints and puts the name of a sophisticated phony (played by Patricia Clarkson) on the paintings. She gets all the praise and publicity. 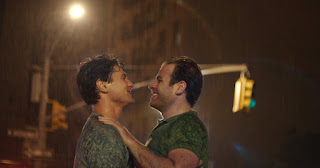 Macklin would love to get a bigger house and marry Adam. Adam is resistant. There's some dissonance. Is there infidelity on the side? No. Each one may look at another man and think "He's hot!," but that is as far as it goes. So what is Adam's problem? Is he a class snob because Macklin is upper class? This becomes the central relationship of ALMOST LOVE. On the whole, the script is pleasant but underwritten. In these times, it is fine for a breezy 90-minute pastime. Another element that holds you to it is the warm, heartfelt performance by Augustus Prew as Macklin. He is so charming and lovable that you just want to reach through the screen and hug him. He and Scott Evans (Adam) make a great and believable New York City couple. Evans gives Adam a working class, regular guy warmth that keeps him from coming off as whiny, thus causing the relationship to hit some speed bumps. Scott Evans is the brother of Chris Evans from CAPTAIN AMERICA and KNIVES OUT.  There's also a heterosexual married couple and a tutor whose college-bound student has a crush on her. Click on the link to see a trailer:

Michelle Buteau in ALMOST LOVE reminded me of the feelings I frequently had while watching SEX AND THE CITY on HBO.  The feeling was -- "There should be a woman of color in the quartet." It should've had an actress like Michelle Buteau. As for the two male actors who are gay playing a gay couple -- that is history.

Back in, say, the 1970's and early 80's, actors -- whether they were straight or gay -- were reluctant to play gay lead characters in films for fear that it would cripple their careers. That may seem hard to believe to today's millennials who grew up watching WILL & GRACE, QUEER EYE and the Ellen DeGeneres daytime talk show. Nevertheless it is true. In 1982, straight actor Harry Hamlin played an openly gay Los Angeles novelist who had a brief romance with a closeted married doctor in MAKING LOVE. The handsome Hamlin was very good in it.  The film offers dried up quickly after MAKING LOVE. Hamlin, fortunately, got work on successful TV shows such as L.A. LAW.

The fear started to ease somewhat when straight actor William Hurt won the Best Actor Oscar for playing an imprisoned drag queen in 1985's KISS OF THE SPIDER WOMAN. The story was set in the politically repressive Latin America. Hurt took over the role when beloved Hollywood veteran, Burt Lancaster, was forced to withdraw for health reasons.  I got that information from William Hurt directly when I interviewed him on my 1988-89 VH1 talk show. Think of what a double feature at a revival movie theater that could have been one day -- Burt Lancaster in BIRDMAN OF ALCATRAZ and KISS OF THE SPIDER WOMAN.

To see Adam and Macklin hug and kiss, knowing that gay men were playing the characters, was so significant to me. By the way, Rosie O'Donnell and I were co-workers at VH1 in the late 80's. When she booked her role in 1992's A LEAGUE OF THEIR OWN, she gave me this advice for my post-VH1 years: "Don't tell 'em you're gay or you'll never get work."

That's the way it was back then. Times have changed. Thank Heaven.

ALMOST LOVE is now available on Prime Video. I give the pleasant rom-com a C+. I give its casting an A. 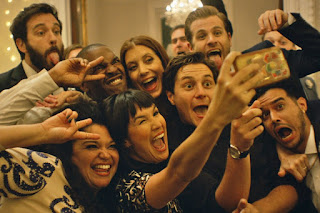