FRUITVAIL STATION.  Ryan Coogler directed that independent film, based on a true life story, and his production was hailed at the Cannes Film Festival.  I saw it at a movie theater in San Francisco.  The story takes place in the Bay Area and the title comes from the name of a mass transit stop where a young, unarmed black man was unjustly shot by police.  The killing of 22-year old Oscar Grant was major news in San Francisco.  Protests followed.  Actor Michael B. Jordan was powerful and touching as Oscar Grant. 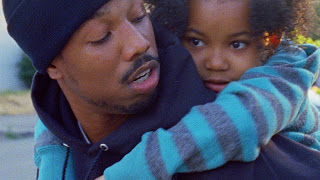 In addition to the high praise and enthusiasm for the film, the cast and the director at the Cannes Film Festival, critics here in America also raved about the film.  I saw it at the AMC Van Ness in San Francisco.  A few minutes before the feature started, about five young and giggling young white women came in and sat two rows in front of me.  I thought, "Oh, Lord. This ain't a SEX AND THE CITY sequel. It's a serious film about a young black man's life and senseless death."  I should not have been so judgmental.  As the movie was ending, I had something in common with those young white ladies two rows in front of me -- we were all sniffling and crying. 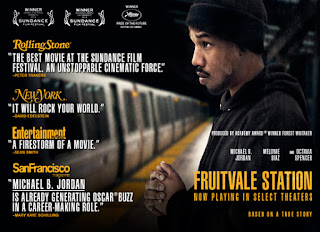 I've mentioned this on my podcast and here in blog posts:  Octavia Spencer, who had won the Best Supporting Actress Oscar for THE HELP, should have received her second Oscar nomination for playing Oscar Grant's mother in FRUITVALE STATION.  And another thing I've mentioned in my podcast with my friend Keith Price -- since the Academy has returned to allowing 10 films to be nominated for Best Picture, it should give us 10 films.  Ever since that rule went back into effect a few years ago (most of us grew up with the 5-Best Picture nominee rule), we have never gotten 10 films.  This year, we have 9 Best Picture nominees.  MUDBOUND by Dee Rees should be the 10th.  FRUITVALE STATION should have been a Best Picture nominee.  I felt that its exclusion, the fact that it was one of the best films of 2013 yet received not one single Oscar nomination, gave fuel to the "Oscars So White" hashtag.  And I don't feel that those two films I mentioned should've been Best Picture nominees simply because they were directed by African American filmmakers. Two smart horror thrillers, Ana Lily Amipour's A GIRL WALK HOMES ALONE AT NIGHT (2014) and Jennifer Kent's THE BABDOOK (2014), Cary Fukunaga's JANE EYRE (2011) and Fukunaga's BEASTS OF NO NATION (2015) were also solid films that deserved to be in Best Picture nomination category, but weren't.  You should see FRUITVALE STATION.
Ryan Coogler's BLACK PANTHER starring Chadwick Boseman, Michael B. Jordan, Angela Bassett plus Oscar winners Lupita Nyong'o and Forest Whitaker opens soon.  I am so excited to see this action/adventure from the Marvel Comics universe.  A black director and a predominantly black cast in a big budget Hollywood studio release.  This is not typical for Hollywood.  Not typical abd extremely refreshing.  It's about damn time.  To put this in film history perspective, remember IN THE HEAT OF THE NIGHT starring Sidney Poitier and Rod Steiger?  Norman Jewison directed that race drama/murder mystery.  It won the Oscar for Best Picture of 1967.

But...despite that Oscar win...Jewison could not find a studio to back him financially when he wanted to make 1984's A SOLDIER'S STORY.  Why?  Because it had a predominantly black cast and a script by a black writer.  Charles Fuller wrote the screenplay based on his stage play. 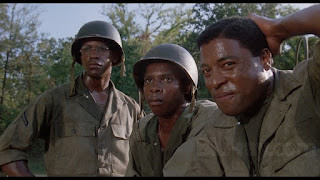 The play won Fuller a Pulitzer Prize.  But Hollywood studios didn't feel that stories about black life with a predominantly black cast were marketable.  Jewison offered to work for way less money than he usually did.  Jewison followed IN THE HEAT OF THE NIGHT with THE THOMAS CROWN AFFAIR starring Steve McQueen and Faye Dunaway, FIDDLER ON THE ROOF and JESUS CHRIST SUPERSTAR.  He believed in A SOLDIER'S STORY and eventually he got it made.  The film version brought Fuller an Oscar nomination for his screenplay and the film itself was a nominee for Best Picture of 1984.  Howard Rollins, Adolph Caesar, David Alan Grier, Robert Townsend and screen newcomer Denzel Washington starred in Jewison's film. 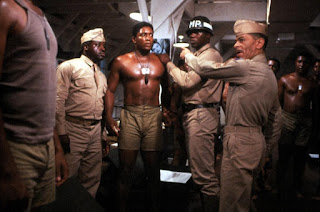 As far as marketability, ABC's GOOD MORNING AMERICA stepped up to the plate for BLACK PANTHER.  Marvel Comics is under the Disney umbrella and Disney is ABC's parent company.  Every day this week, Robin Roberts and the GMA team welcome members of the BLACK PANTHER cast during the second hour of the show.  You may say, "Heck, that's the way it should be.  They should promote a production from the same parent company studio."  Things aren't always the way they should be in film and TV equality.

The critically acclaimed STRAIGHT OUTTA COMPTON, a film many critics felt should've been a Best Picture Oscar nominee, was #1 at the box office for three consecutive weekends.  That was surely a first for an African American director.  The director was F. Gary Gray and the hit biopic was a Universal Studios release.  TODAY, the network morning show on NBC/Universal, gave no promotion to STRAIGHT OUTTA COMPTON even though Matt Lauer (with the show back then) is seen several times in the movie.  TODAY gave attention to Universal's other 2015 releases -- TRAINWRECK, JURASSIC WORLD and MINIONS.  TODAY pretty much ignored STRAIGHT OUTTA COMPTON.  I am so full of gratitude to see each BLACK PANTHER guest segment this week on GOOD MORNING AMERICA.  Representation matters. 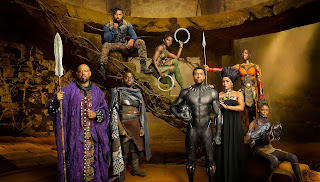 Hollywood responds to money.  Let's see how Ryan Coogler's action/adventure starring a predominantly black cast in a film that shows a culturally rich and advanced Africa does at the box office.  Wow.  Positive images of black people and positive images of a continent that Trump, just a few weeks ago, reportedly referred to as a "shit-hole country."  Ryan Coogler's BLACK PANTHER could not be more perfectly timed. We are so proud of him.