At the local movie theaters, this Matt Damon movie seem to come and go pretty quickly.  And for good reason.  DOWNSIZING is the name of the sci-fi social satire.  We baby boomers grew up watching cool 1950s sci-fi movies about humans who were shrunk.  Movies like ATTACK OF THE PUPPET PEOPLE with a mad scientist shrinking people to miniature size and THE INCREDIBLE SHRINKING MAN about a guy who gets really small because he was exposed to radiation in that Atomic Age.  Those movies ran close to 90 minutes.  The same should've applied to DOWNSIZING.  It runs 2 hours and 15 minutes.  Sometimes, it feels longer.  In DOWNSIZING, people volunteer to be shrunk in order to help the world with its overpopulation crisis.  A scientific team in Norway has figured out how to downsize people to five inches in height.  Smaller people produce less waste and take up less space.  After they're reduced, they're relocated to attractive, clean and somewhat bland suburban communities with all the amenities.  The new communities have been built to accommodate newly-downsized people.  Damon plays the rather dorky middle-aged guy who really wants to contribute to society.  He and the wife apply to be downsized.  But, after he's shrunk, he realizes how self-absorbed and materialistic his wife truly is.  At the last minute, and without telling him, she changed her mind about going through the procedure.  So now we've got five inches of a Matt Damon character moping his way through a new life as an estranged husband. 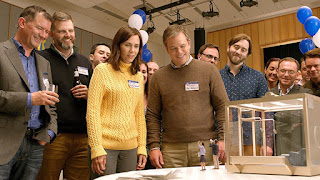 The movie starts out with a message that less is more in order to cure a stressed out life.  Then it switches over to "be kind."  In the 1950s movies, we got to the shrinkage pretty quickly.  In DOWNSIZING, we're a half hour into the movie and still seeing Damon undergo shrinkage and relocation.  The movie really wakes up and comes to life with the appearance of actress Hong Chau as a downsized Vietnamese dissident. 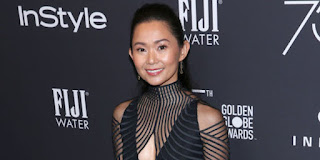 The dissident/activist is an amputee and has only one leg.  Nevertheless, she is focused and forthcoming in her mission to help others.  That's the passion of the fast-talking, fast-thinking woman who shakes up the small life of Paul Safranek (Matt Damon). 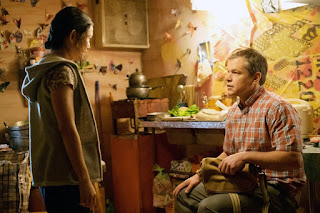 Hong Chau got a nomination for a Golden Globe and a Screen Actors Guild award.  She didn't get an Oscar nomination in January for Best Supporting Actress  -- and she was good enough to be.  Her performance is the highlight of the film.  She is the opposite of his wife.  With her, his broken small heart grows again. 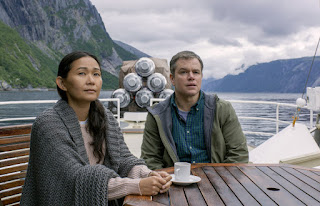 The film was written by Alexander Payne and Jim Taylor.  They've given us fine screenplays such as 1999's ELECTION with Reese Witherspoon, ABOUT SCHMIDT starring Jack Nicholson and SIDEWAYS with Paul Giamatti and Virginia Madsen.  Those were better, more streamlined screenplays.

In this, the Vietnamese activist has a benevolent fire that you just can't ignore. She has experienced the horrors of war.  I won't give away the ending.  However, in a peak moment of love realized, a scene that called for a tender and memorable romantic monologue, we got a monologue that was peppered with the F-word.  To me, that robbed a romantic scene of a more impact. All those F-bombs weren't necessary.  Here's a trailer.
With her one-leg and and her intense mission to be kind, Hong Chau's character is like a modern-day High Lama from Frank Capra's 1937 film, LOST HORIZON.  Now, I am eager to see what Hollywood does with the talent of Asian American actress, Hong Chau. Her parents are Vietnamese.  Reportedly, she grew up in New Orleans and attended Boston University.  She was on the HBO series, TREME.

The only East Asian-American actress I can think of who won an Oscar was Miyoshi Umeki.  She won Best Supporting Actress for 1957's drama SAYONARA starring Marlon Brando and James Garner.  Umeki starred on Broadway in the original cast of Rodgers & Hammerstein's musical comedy, FLOWER DRUM SONG.  She repeated her musical starring role in the film version.  Hollywood didn't seem to offer the Japanese-American actress many challenging, varied roles after she won her Oscar.  Like Black and Latina Oscar nominees/winners, she went to TV and found a big audience.  Miyoshi Umeki co-starred on the hit ABC sitcom, THE COURTSHIP OF EDDIE'S FATHER from 1969 to 1972.

Hollywood needs to give Hong Chau more good characters to play. The "Oscars So White" hashtag is not just for us black performers, it's to get more opportunities to other people of color too. DOWNSIZING, a half-hour too long but held up by the magnetic performance of Hong Chau.
at February 09, 2018