The name of the revenge and guilt drama is THREE BILLBOARDS OUTSIDE EBBING, MISSOURI.  Frances McDormand, who's been one of my favorite actors since the 1980s, had the lead role/  She gets it in her teeth like a hungry terrier who just dashed onto a piece of roast beef that you dropped off the dinner table.Frances McDormand plays Mildred Hayes, one of the toughest mothers we've seen onscreen in quite some time.  She will cuss you out or kick you in the crotch in a heartbeat.  Her anger is understandable.  Her daughter was raped and murdered.  Seven months later, there's been no progress in the investigation to catch the criminal.  She buys ad space on three billboards in a row on a town highway and her messages blame the ineffectual police department.  It seems to be an open secret within the local police force that Officer Jason Dixon, played terrifically by Sam Rockwell, is a racist.  He may seem like he's reforming because he's saying terms like "African Americans" instead of using the N-word, but the townsfolk and fellow cops know what the real deal is.  Mildred gets harassed by men in town when her billboards make local headlines, but Mildred fights back.  She's in vigilante mode. 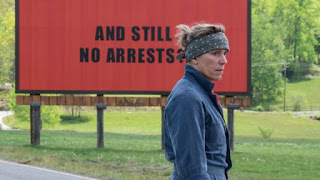 This movie was in limited release at the same allegations of sexual harassment and misconduct against Harvey Weinstein plus noted network broadcasters started to explode across the news landscape.  Personally, I wondered if any of the women speaking up had ever given Weinstein a swift kneecap to the balls the way Frances would have.  She had a forceful, effective way of making a man realize that "No means No." 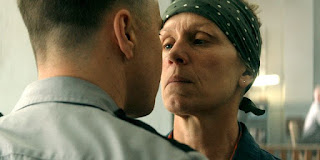 Did you see THREE BILLBOARDS OUTSIDE EBBING, MISSOURI?  I know they are two different kids of stories but in the arena of a woman challenging a male force that's breaking the law and there's been a death, I feel that Spielberg's THE POST has a smoother screenplay.  Meryl Streep plays Kay Graham, publisher of THE WASHINGTON POST newspaper at a time when President Nixon is violating the Constitution and his harassing the free press while young American men die in the Vietnam War, a war the U.S. can't win.  Spielberg's THE POST is based on a true story.

I won't tell you anything more about the movie.  I saw it first and foremost because it stars Frances McDormand and Sam Rockwell.  They deserved the Oscar nominations that they got for it.  However, I did wonder if the story would have had a more sharpness and sting had the Mildred been played by a black actress such as Alfre Woodward, Angela Bassett or Taraji P. Henson.  Also, some moviegoers have had a problem with the racist police offer played by Sam Rockwell.  I can see why.  He seemed to be redeemed and likeable halfway through the story.  But is he really?  Think about that end of the movie, if you've seen it.  Here's a trailer. Be prepared for adult, blunt language.
I loved the performances, yet I was kind of cold on the movie.  I kept thinking of the Coen Brothers, whose work may have heavily influenced the director, and something a neighbor said to me years ago when we were in our local video store looking for DVDs to rent.  The store had a Preston Sturges classic playing on the in-store TV.  My neighbor, who is not in the entertainment business, and I started chatting about the old movie -- SULLIVAN'S TRAVELS.  I casually remarked how you can see the Preston Sturges influence on the Coen Brothers in their films THE HUDSUCKER PROXY and especially in O BROTHER, WHERE ARE THOU?, a film that takes its title from something important in 1941's SULLIVAN'S TRAVELS.

My neighbor replied, "Yeah, the only difference is...the Coen Brothers don't like people."  He added that Preston Sturges loved people and that comes through in his classics.  I've come to agree with that neighbor of mine.  The Coen Brothers make good movies but there's a chilliness to them.  I felt that kind of chilliness in THREE BILLBOARDS OUTSIDE EBBING, MISSOURI.  Chilliness and plot holes.  The ferocious, brass ovaries performance of Frances McDormand is the fire that holds our attention.  Rockwell, one of the best actors on the indie film scene, has been long overdue an Oscar nomination.  He's delivered some solid, versatile performances for years.  Oscar nominee Woody Harrelson and Peter Dinklage co-star.

Let me know what you thought of THREE BILLBOARDS OUTSIDE EBBING, MISSOURI.
at February 11, 2018