Former Disney TV star, Vanessa Hudgens, made a gritty transition to more mature and challenging fare as Apple in Gimme Shelter.  Hudgens was popular on Disney's High School Musical.  Apple is the name the movie character has chosen for herself.  She's had a miserable young life and seems to have known mean streets growing up.  This is loosely based on real people.  We've seen this kind of story before in films.  Apple has a tough exterior because she's an unwed pregnant teen.  We, as moviegoers, wait for someone to break through that tough front and reach her wounded teen heart.  Vanessa Hudgens gave a good performance in this indie movie. 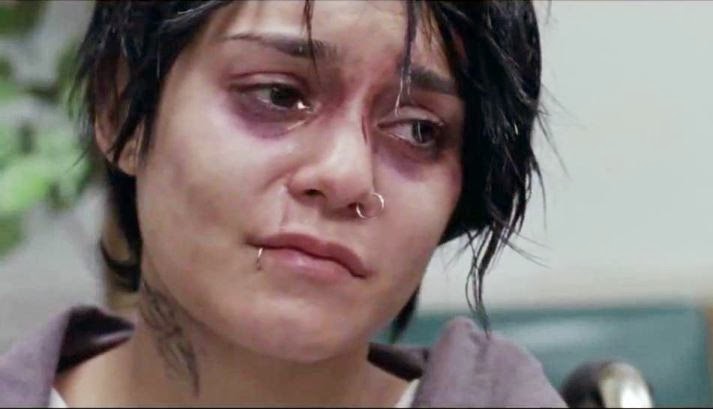 She wasn't the only one who did good work.  But racial images in this film were as stereotyped as a 1930s movie from a major Hollywood studio.  That bothered me.  And, as a guy who had years of parochial school education and was once an altar boy, I saw this as a very traditional, conservative Catholic film posing as an edgy independent movie.

I talked about this movie on Arise TV, a channel worth noting because of its racial and sexual diversity in the discussion of fine arts.

As Gimme Shelter opens, we see that the bitter Apple is in a facility and wants to leave.  We're not sure if it's a rehab facility or what.  But when she calls for a cab and wants out, there's trouble.  She's slapped, punched, kicked and screamed at by a dragon of an older woman.  Were they rival junkies?  We don't know.  The fuzzy script needed to be sharper.  We need to know what the relationships and backstories were.  Apple got a serious beat-down leaving that New Jersey facility and her female attacker followed her to the cab. 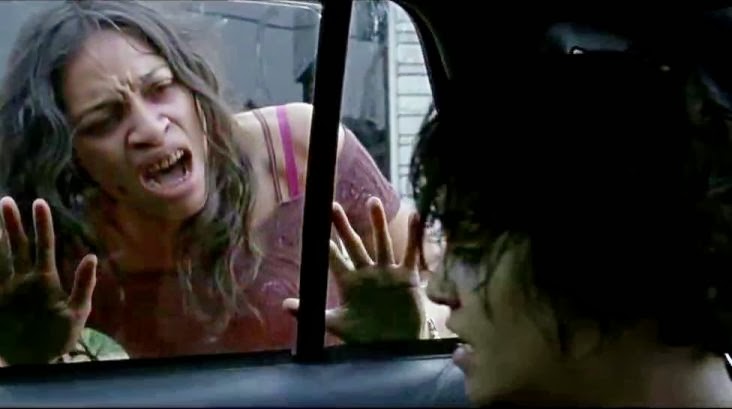 We later learn that the woman is her mother. 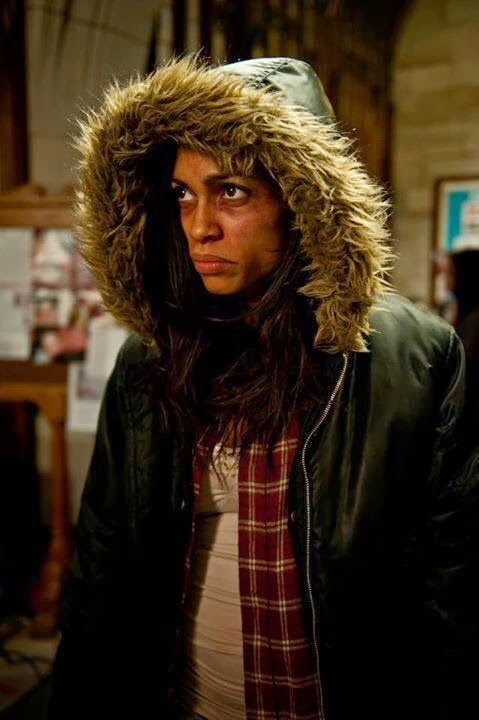 Apple doesn't have enough cash for her destination.  The cabdriver pulls over and drags her out of his cab and onto the highway.  (He should've had his license revoked.) 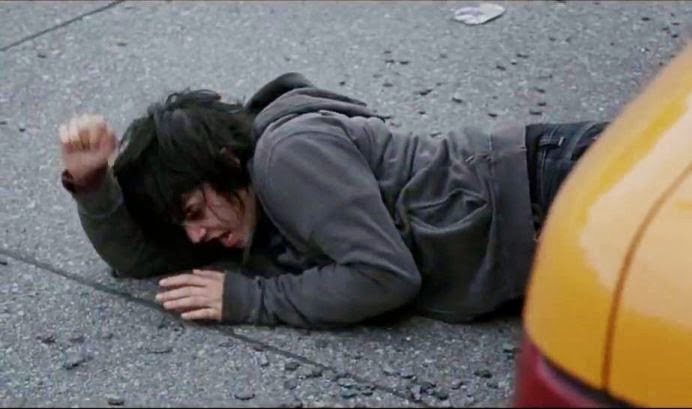 Apple doesn't have money for a meal so the broke teen eats food she finds in dumpsters. 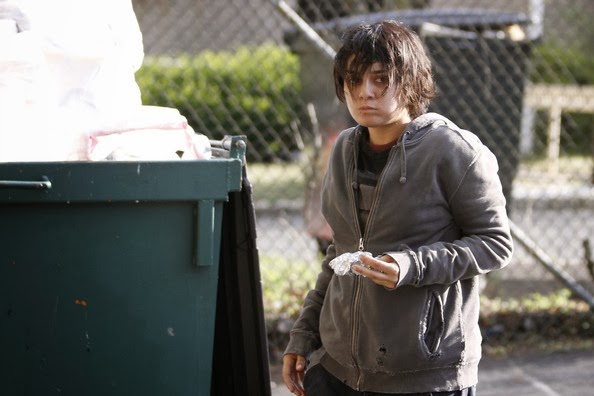 But wait, there's more.  Later, she'll be forced on ground and handcuffed by cops, attacked with a sharp object and she'll give birth in a hospital.  And no time in this entire drama does that abused girl say a four-letter word.  Not one.  Nobody says a four-letter word in this movie.  Not even the monster mother who almost makes this indie film seem like Precious, Jr.  I've been known to say "Damn!  I look like shit" standing before a department store mirror while trying on cargo pants.  That's when I felt this film had some sort of Catholic agenda.  Also, there was the kindly religious character played by James Earl Jones.  It's a small role that Mr. Jones must've shot in just one day. 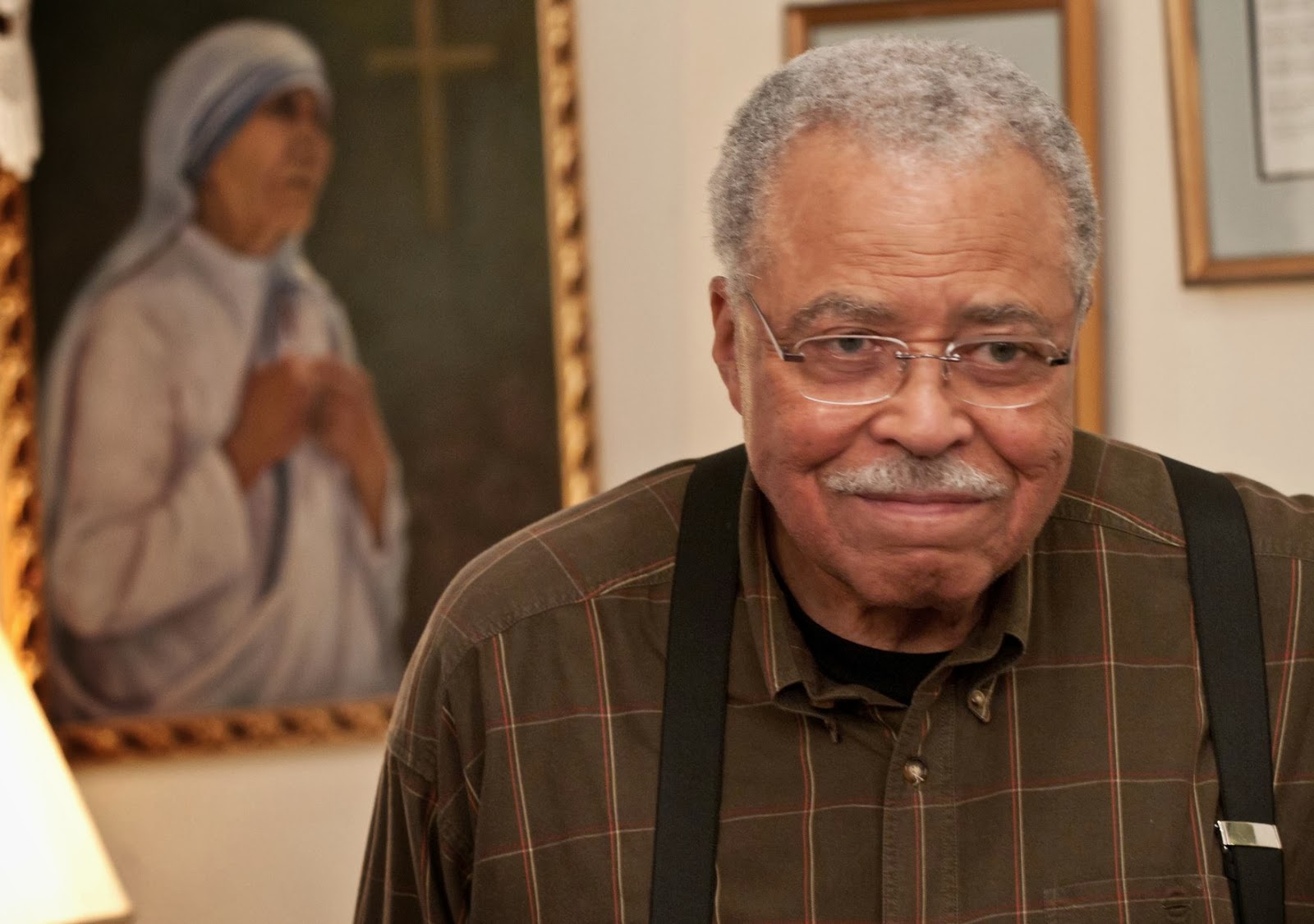 He works with the Catholic shelter for unwed teen mothers.  We can tell this is a good place because...well, look behind him.  A framed painting of Mother Teresa with a crucifix.

About the racial images, Apple and her mother look Latina.  The cabdriver who physically yanks the girl out of his cab had a hairy, swarthy look.  The aggressive dude in the SUV who pursues Apple for sexual purposes is a burly black man.  Most of the under-educated unwed mothers in the shelter are black and Latina.  The religious figure who runs the shelter -- the savior, if you will -- is a white woman.  A white woman who, as we're shown, is seen in framed photographs with...Mother Teresa and President Ronald Reagan.  In the literature of film, that reads as "Christian. Conservative."

The privileged, educated people who live in a New Jersey house the size of a hotel are white people.  They're the Wall Street executive father (played nicely by Brendan Fraser), his slim wife and their two little children. 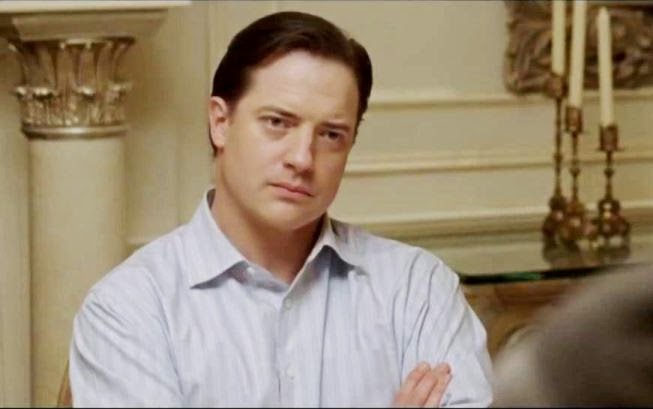 There's enough room in his house for them and all the Von Trapps from The Sound of Music.  And the New Jersey couple has contractors adding on to their house.  The husband's irresponsibility and his wife's irresponsibility are covered up by their upscale exterior.  And their little kids are bratty at the dinner table.  Serving the dinner is --- the Latina maid.  Apple was headed for this big house before the physically abusive driver pulled her out of his cab.

Have you ever noticed how frequently American movies imply that blacks, Latinos and Asians do not work on Wall Street?  The New Jersey rich guy has a connection to poor Apple.

Apple looks like a skid row resident for most of the movie -- until she gives birth.  Soon after she has her baby, she finds Catholic spiritual contentment and starts dressing like Ann-Margret in the first hour of Bye Bye Birdie.  Even her hair and make-up are immediately different.  It's Disney's High School Musical with all drama and no music. 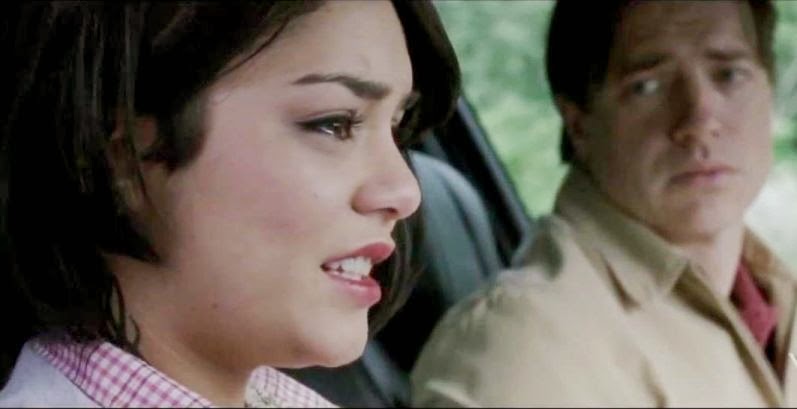 The high point of this movie was the raw, blistering performance by Rosario Dawson as Apple's abusive mother.  Wow.  What a performance and what a character transformation.  Do not be surprised to hear that, one day, Rosario Dawson has received an Oscar nomination.  She is one excellent actress. 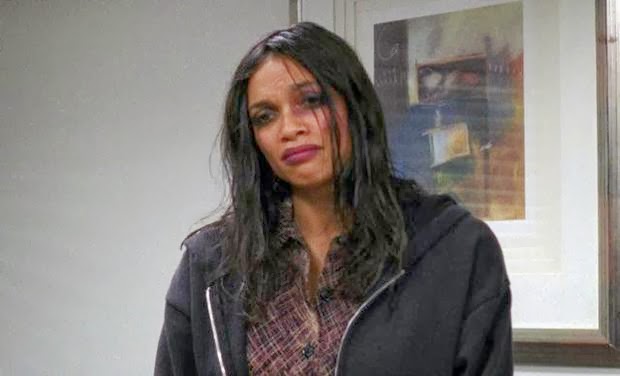 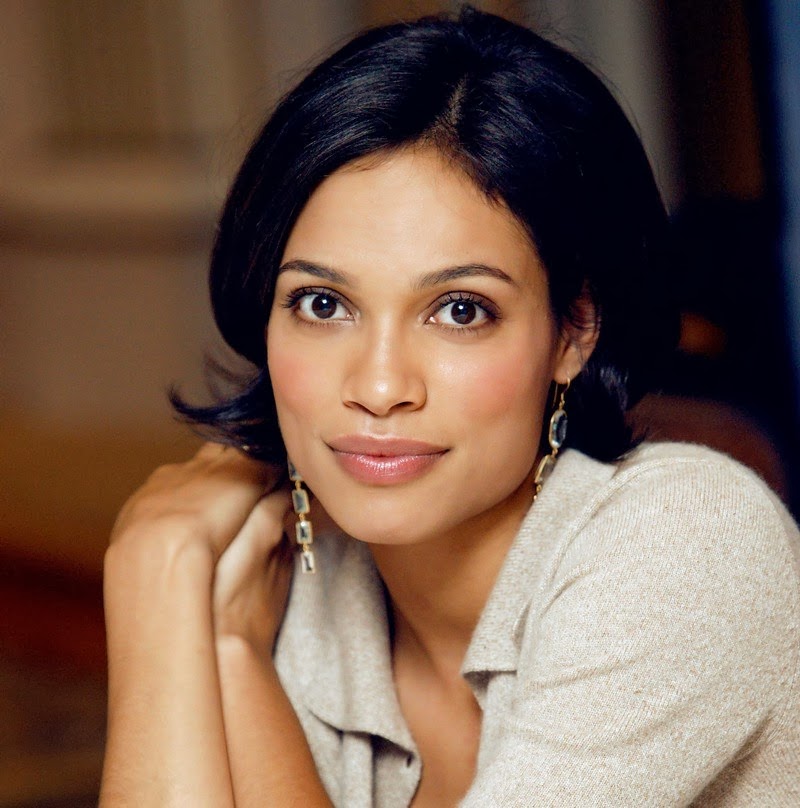 I liked the performances by Vanessa Hudgens, Rosario Dawson and Brendan Fraser.  I did not like the way racial images in this modern indie movie reminded me of ethnic stereotypes from the old Hollywood days.

I talked about Gimme Shelter and I, Frankenstein with Mike Sargent.  My buddy, Mike, is the host of a groundbreaking weekend show on Arise TV called On Screen.  Why is it groundbreaking?  This is a half-hour film review/interview and entertainment news program hosted by a black man who reviews movies.  We have not seen this on network television.  We still don't.  On Screen airs online here in America.  There's not a television distributor for the program yet.  It airs on TV overseas in London.  Also, Mike has guest male and female film critics of color on his show. Black female and Latina film critics have been totally absent from the weekly network and syndicated film review scene.  On Screen tapes in New York City.  TV journalists should be writing about this new show.  We've never seen a weekly program like this on CBS, NBC, ABC or PBS affiliates.

Here's the On Screen episode with me as a guest film reviewer.  I had a great time.

American television needs to embrace and make a place for racially groundbreaking and upscale product such as this.  TV columnists should pay attention to Arise.TV.  It's giving us much-needed diversity in the area of film talk and entertainment news.
at February 16, 2014