She got a Best Supporting Actress Oscar nomination for her last big screen performance.  That performance was in a family film that was a gigantic box office hit.  It also took the Oscars for Best Director and Best Picture of 1965.  Peggy Wood played the Reverend Mother in the abbey opposite Julie Andrews as Maria in THE SOUND OF MUSIC.  We see the affection she has for Maria when all the nuns sing "How Do You Solve a Problem Like Maria?" right after the film's gorgeous opening with Julie Andrews singing the title tune.

In that classic film musical based on the Broadway hit of the same name, Peggy Wood reminded me of every kindly nun I had as a teacher during my many years of parochial schooling.  One of most stirring highlights of the film is the Reverend Mother singing great advice to the confused Maria.

Reverend Mother knows Maria needs to be with the Von Trapp kids and their widower father.  Maria has run back to the convent to become a nun mainly because she's heartbroken.  "What is it you cahn't face?" the wise senior sister asks.  Reverend Mother knows the convent is not the right place for Maria.  She needs to get back in those hills, follow her heart and find love.  The Von Trapp children and the Baron need her as a governess.  And a stepmother.

Later on, Maria can invite all the nuns to her big fabulous wedding.  The older nun musically encourages Maria to "Climb Ev'ry Mountain." 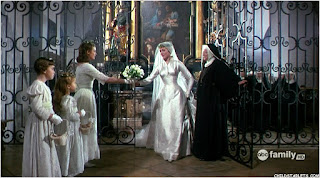 That older nun sings the song like it's a national anthem.  After she hits the final note, you feel like an umpire should yell "Play ball!"  I love the "Climb Ev'ry Mountain" number.

The sentiment and attitude of that number and of Peggy Wood's performance as Mother Abbess are the exact opposite of her character in another film classic, one that came out in 1937. 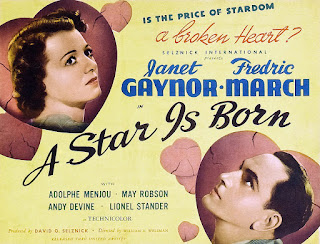 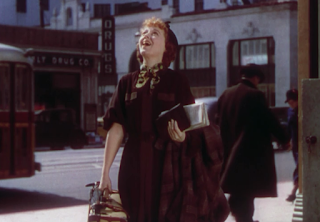 In the original version of A STAR IS BORN, Peggy Wood has a brief role as the glacially elegant Central Casting Corporation office supervisor who tries to discourage a hopeful Esther Blodgett (played by Janet Gaynor) from seeking a career and success in the Hollywood Hills.  After the supervisor informs the movie hopeful that the office hasn't put anyone new on the books for movie extra work in two years, she guides Esther to exit and says, "You know what your chances are?  One in a hundred thousand."

Esther crestfallen yet politely replies, "But maybe...I'm that one."

There you have it.  Two different kinds of Wood for one double feature.
at September 20, 2016