I needed something animated and naughty to clear my brain after a long, busy day.  I noticed that 1999's Oscar-nominated big screen feature, SOUTH PARK: BIGGER, LONGER and UNCUT is on Netflix.  What could be more animated and naughty than those popular little cartoon kids from cable TV engaging in "foul language and toilet humor"? 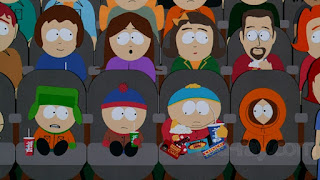 They didn't even realize the meanings of the bad language they whipped out because they'd heard it in a movie -- a movie called "Asses on Fire."  The movie was rated R and they should not have been in the audience in the first place.  They tricked a homeless guy into buying their tickets.  Instead of their parents and the employees on the movie theater staff taking responsibility for little school kids being in the R-rated movie screening, the town decides to blame the two Canadian stars of the movie. 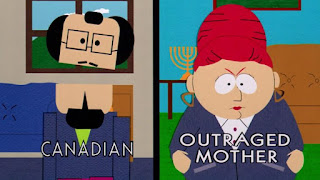 That leads us into "Blame Canada," the funny original tune that earned an Oscar nomination for Best Song.  I'm still waiting for Michael Bublé or Michael Feinstein to do a cover of "Blame Canada."

I laughed a lot when I saw SOUTH PARK: BIGGER, LONGER and UNCUT during its theatrical release.  The South Park adventure had that same snap of sweet silliness and smart anarchy that moviegoers got from The Marx Brothers at their peak in the 1930s.  Then and now, there's one thing that always tickles the heck out of me in SOUTH PARK: BIGGER, LONGER and UNCUT -- and it's something that's rarely mentioned.  Little Kenny has an out-of-body experience on a hospital operating table and goes to Hell.  While in Hell, he finds the home of Satan and Saddam Hussein and he peeks into their bedroom.  The two are in bed having a conversation. 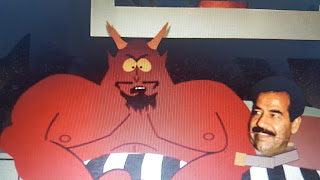 It's a large, attractive, minimally decorated bedroom.  Above Satan and Saddam Hussein on their bedroom wall, is a large and framed photograph of actor Skeet Ulrich. 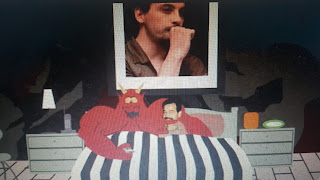 That is so South Park.

That R-rated animated full-length feature inspired by the TV series reminded me of something I thought about when I watched another feature on Netflix:  INTERIOR. LEATHER BAR.  That's a one-hour docu-fiction that premiered at the 2013 Sundance Film Festival.  James Franco is in it as himself and he co-directed the feature.  This is way naughtier than the South Park feature because of its full frontal male nudity and graphic sexual situations.  But the South Park animated feature has more of a point.

CRUISING is a 1980 murder mystery starring  Al Pacino as a New York City cop who goes undercover.  He takes a walk on the wild side and goes undercover as a gay man who frequents leather bars. He does this because a number of gay men have been slain and the psycho needs to be caught.  William Friedkin (The French Connection, The Exorcist, Boys in the Band) directed the movie.  Cruising got a lot of publicity because of the controversy that arose.  Gay groups protested the content.  The ratings board wanted to give it an X.  Reportedly, Friedkin cut 40 minutes of hardcore footage to bring his Pacino vehicle down from an X to an R rating. 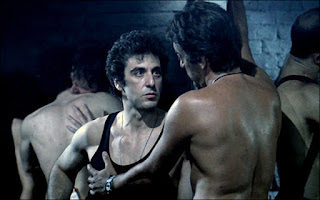 James Franco and Travis Mathews shoot a short indie movie in a Hollywood warehouse.  The indie movie is what they imagine the missing 40 minutes to be -- hence the title Interior.  Leather Bar. 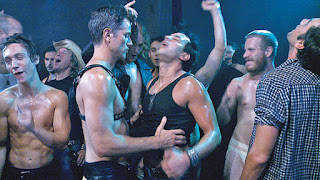 There are times when this one hour feature is unintentionally funny.  Like a few actors ask in Franco's docu-thing: "What's the point of this project?"  Men will be naked and some will be engaged in sexual acts.  Franco is cool with that.  He casts a friend of 15 years in the role that Al Pacino had in the movie.  The friend, an unknown actor named Val, took the job -- but he's straight, married, and fairly conservative in his sexual views of what Franco and his co-director want.  On his way to the shoot, his wife calls and reminds him they have dinner reservations that night.  A concerned male friend wants to know why he's doing that "Franco faggot project."  Val feels that Franco wants to get a range a human experience and then there's talk of "artistic and sexual free expression."  But, while men are putting on studded leather codpieces and jockstraps, no one really knows what the point of this project really is.  And poor Val.  There's a moment when a nearly-naked man is getting spanked with a wooden paddle.  Val looks wide-eyed, like Shelley Duvall freaking out in The Shining.  James Franco looks on casually and unfazed like he's waiting for his SUV to come through a car wash on Santa Monica Boulevard in West Hollywood. 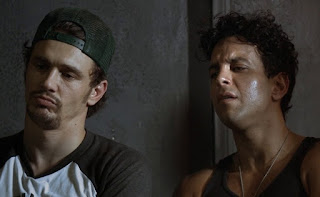 This is all too much for Val, an actor who can never quite grasp how to play his scene as the cop character in a gay leather bar where he's a hot man getting cruised.  Val says that Al Pacino is his favorite actor.  Franco doesn't give him much direction.  He tells Val that he's tired of Hollywood movies restricting sexual expression and constantly showing only the heterosexual side of life.  Then he goes inside, takes a camera, and shoots two men having sex on a couch.  I'm surprised Val's head didn't explode.  The whole dynamic between Val and Franco seemed to be like that between the Anne Bancroft and Shirley MacLaine ballet characters in The Turning Point.  Franco is Bancroft's, the one who became the big popular star.  Val is MacLaine's, the one who didn't become a star and got married. 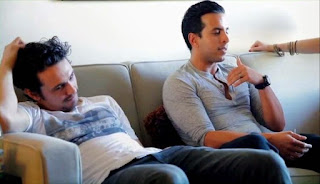 I would've told Val this:  "You're in a gay bar in downtown New York City.  It's a sexually intense environment.  Not the mainstream. More underground. You're undercover and underground.  Guys are cruising you.  You may be questioning your own sexuality.  You may be slightly excited.  But more than anything, your cop radar is at work.  If you are cruising a guy..,you're not just cruising.  You're checking him for possible weapons.  You're on the hunt for a psycho killer who picks up gay men. You're constantly alert."

Val kept his eyes downcast as if he was a shy Southern belle at a barbecue.  I would've had him shoot that scene over.

INTERIOR.  LEATHER BAR also shows you want not to do as a young actor in L.A.  Or any other city.  Val is in the make-up room watching the make-up woman put eye shadow on a tall, lean, handsome and chatty guy.  He's a straight guy playing a drag queen.  He's heard of Al Pacino but he never saw Cruising.  Renting a DVD of that movie should have been the first item of his homework list.  He's playing a character in a project based on the movie Cruising.  Val talks to him about footage he saw in the dailies from the previous day and the chatty actor says, "What are dailies?"  I kid you not.  It was like Cruising meets Waiting for Guffman.

When I was pretty fresh out of college and had just landed my first professional TV job, I had to review Cruising.  There was no preview of it for local press, so my producer had me attend the first early afternoon showing the day it opened at a theater.  Then I went to the station taped my 2-minute interview for the evening broadcast.

I didn't hate Cruising.  I'm an Al Pacino fan and I did like his performance.  But there were things I strongly disliked about the movie.  One thing I did hate about the experience was the theater policy.  It was on a double bill with PG-rated kung fu movie.  I sat near three boys who looked to be of high school age, who'd come for the kung-fu movie.  I entered during the last ten minutes of it and the boys were being boys -- shouting stuff at the kung fu hero.  Then there was an intermission, then coming attractions followed by Cruising.  Those kids should not have been allowed by management to stay in that small audience for Friedkin's R-rated movie.  They were laughing and making wisecracks at the sight of men dancing together on the screen, but...when the gruesome murders started...they got quiet.  I could see that they were shaken.  What happened in Milwaukee that Friday afternoon was pretty similar to the opening of SOUTH PARK:  BIGGER, LONGER and UNCUT.  Under-aged kids in an R-rated movie audience.

James Franco's INTERIOR.  LEATHER BAR is the kind of feature that would've been lampooned in an episode of SOUTH PARK.  With a special cameo appearance by Skeet Ulrich.