Laughs from ONE FUNNY MOTHER

Blizzard was hot the night we saw her.  Comedian Dena Blizzard took maternal material from her stand-up act and crafted it into a 90-minute stage show that is, judging from last Thursday's audience response, a real crowd-pleaser.  Dena Blizzard's one-woman show is called ONE FUNNY MOTHER and you can catch it at the easily accessible New World Stages theater on West 50th Street between 8th and 9th Avenues in New York City.  I took a buddy with me.  He's not married.  I'm not married.  He has a full-time job working with special needs kids.  He howled with laughter at Dena's tales of trying to balance suburban motherhood and wifely duties.  Wine helps carry her through the craziness of domestic life.  Wine cleverly stashed in different places on the set -- like in stuffed toys or behind the sofa as she folds laundry in the cluttered room.  She's got the daily routine down to a science.  She knows when and who to drop off at ballet class and soccer practice and who to pick up in the mini-van.  Her loving but flatulent husband can't do what she does.  Dena Blizzard has her crazy domestic army under full control.  She's like General Patton with Fallopian tubes. 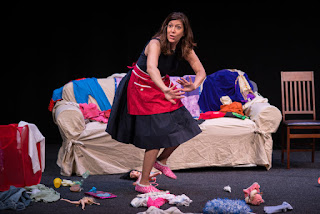 When I was a youngster, I remember a critic taking Totie Fields to task for a routine she did on a TV variety show.  Her bit was along the lines of "Last weekend, my husband was focused on the Super Bowl.  What did I focus on?  The toilet bowl! I'm cleaned the entire weekend!"  The audience loved Totie talking about her tiring life as a domestic goddess.  But the male critic felt that her mention of "toilet bowl" was very unladylike.  Trailblazing women comedians like Totie Fields, Phyllis Diller and Joan Rivers would have loved and enthusiastically applauded Dena Blizzard in ONE FUNNY MOTHER. 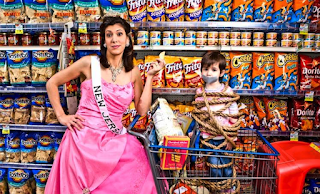 Keep in mind, this is not G-rated like the classic Erma Bombeck material about being a wife and mother.  Dena drops a few 4-letter words and does some fabulous R-rated stuff.  Her bit about men if they had to deal with the "discomfort" of having extra large penises broke me up.  Very funny.  That and the story about her gas-passing Italian husband playing online poker. 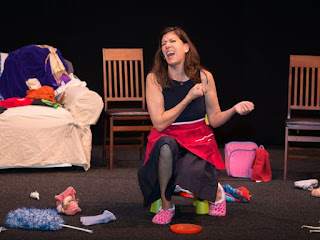 She has a very casual, conversational tone onstage.  You feel as if you're in the room with her having coffee (or wine) as she folds laundry.  Dena Blizzard directed the show herself.  Her Creative Consultant is the highly-respected theater director and Broadway veteran, Carl Andress.  Her stage presentation works because it wisely brings in other faces and voices.  There are funny video clip montages of friends answering questions about their spouses.  Is the marriage still sexy?  Do they need a little sip of wine occasionally to get through the housework? Does the spouse ever work their last good nerve?  The audience loved the answers.  The video segments allow Dena some time off-stage to make costume changes. 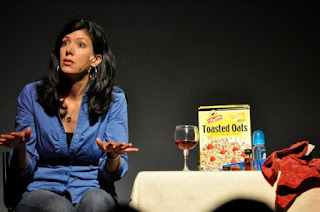 For me, Dena Blizzard was at her peak when she interacted with audience members and did improv.  It's a non-mom section that really highlights her quick and sophisticated comedy gifts.  The guys in our audience gave her good stuff to deal with in that bit.  This is the kind of vehicle that's like a excellent 90-minute pitch for a network TV sitcom deal and film role consideration.  I'd be shocked if Dena hasn't been approached by TV executives.

This is working class entertainment with a fun character.  Behind all the gags and wisecracks, you do sense that Dena Blizzard loves being a mother, a wife and a friend.  And a performer.  Her warm personality makes the show.  The ad for it didn't lie:  It's a hilarious night of laundry, laughs and liquor.  For ticket info, check out the website at OneFunnyMother.com.

I'm very eager to see what TV and/or Hollywood do with the talents of Dena Blizzard.  ONE FUNNY MOTHER has been extended through September 3rd. 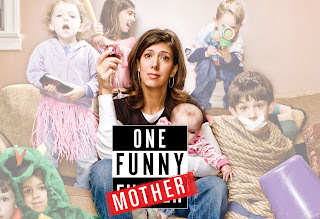