The dairy section of your local supermarket doesn't have this much cheese in it.  I saw THE UNAUTHORIZED FULL HOUSE STORY.  It aired recently on Lifetime TV.  What a wheel o' cheese!  This production is so lame that it's actually somewhat entertaining to keep on in the background as you're folding laundry or just relaxing.  Was the FULL HOUSE sitcom so culturally significant that it deserved its own behind the scenes biopic?  In the programming world of Lifetime, Full House must be right up there with I Love Lucy, Bewitched, That Girl and The Mary Tyler Moore Show.  Who knew?  That means there were actually casting calls in Hollywood for the right actor to play comedian Bob Saget.  And Dave Coulier.  And John Stamos.  And the Olsen Twins.  At times, this resembles an extended TV comedy sketch take-off. 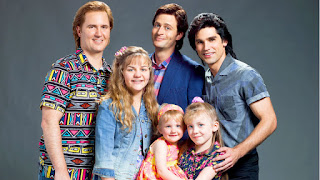 The story starts in 1987 when the first episodes of Full House are being taped.  Justin Mader as Dave Coulier holds one of the Olsen Twins.  He tapes a scene with John Stamos who's played by Justin Gaston.  The camera crew likes the scene and laughs.  We flashback to 1985 to see Garrett Brawith as Bob Saget doing a set at a comedy club in L.A.  His material is way naughtier than his image as the wholesome dad on Full House.  In the club, he's doing Tampon gags.  He loves doing edgy material and he loves his wife.  Coulier, a dear friend, calls him a serial monogamist.  But Saget's career isn't where he wants it to be and seeking work or having work takes him out of the house a lot while the wife wants to raise a family.  Stamos isn't content to be just a handsome Greek who's a babe magnet thanks to his looks.  He's out of work and wants to be a serious actor.  As for Coulier, he was tapped to be a new Saturday Night Live cast member but the deal falls apart.  This was in the 80s when it seemed that every other stand-up comedian got either a sitcom pilot deal or a movie deal. 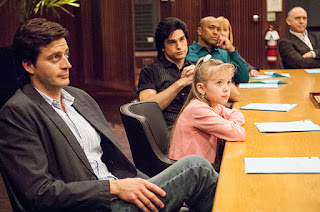 We see how Full House was created and cast.  Will it be a hit?  Will the three male lead actors bond so they actually seem like best friends on the sitcom?  We see that too. 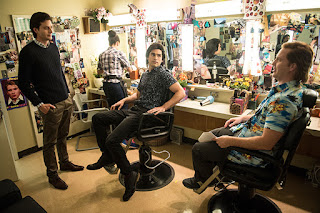 The network wanted a lovable dad like Bill Cosby on The Cosby Show.  Keep in mind, this was years ago.  Will Saget stop being grumpy about playing a mainstream dad character?  Will his marriage survive sitcom success?  Will he stop with the big titty jokes on the set when he thinks all the producers and the kids are gone?  We'll see that too.  I had no idea Saget liked doing R-rated material.  One of the cheesiest and strangest bits of business in this script involves Dave Coulier.  The big, funny and somewhat lonely guy was apparently really proud of his flatulence.  Was that true?  The weird part comes when he lets it go.  It's not when he's just with other guys -- like the cowboys eating beans in Mel Brooks' Blazing Saddles.  There's a sweet moment with the cast and other production teammates that leads to a group hug.  And then...Dave sounds like a set of bagpipes that somebody sat on.  He clears the room and seems pleased with himself.  The same thing happens near the end of the story.  He's in the middle of a group of Full House veterans at a wedding reception when he breaks wind.  A wedding reception!  It's just so wrong.  "Art for art's sake" used to be MGM's Hollywood studio production motto in the 1920s and 30s.  Coulier's bodily production motto must have been "Fart for fart's sake."

I did like Justin Gaston as heartthrob John Stamos.  And there were scenes I liked, such as the casting process, the renegotiation with the lawyer representing the little Olsen Twins and the moment when the three male leads discover that the twins are the most popular characters on the show.  Here's a short trailer.
The Unauthorized Full House Story premiered last weekend on Lifetime.  It follows that sitcom from its beginning in 1987 to its end in 1995.  Don't expect a surprising, riveting, dramatic story.  There's more cheese than meat in this dish.