This season for Oscar buzz has begun. The Oscar nominations will be announced on March 15th of next year and critics such as Anne Thompson of INDIEWIRE and Clayton Davis of VARIETY have mentioned Viola Davis as ripe for another Best Actress Oscar nomination thanks to her performance in MA RAINEY'S BLACK BOTTOM coming to Netflix. 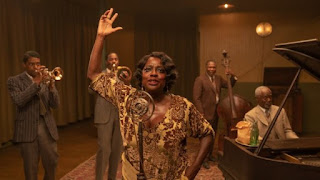 Just like FENCES, it's a film based on a play by the late Pulitzer Prize winner, August Wilson. The film version of FENCES, directed by and co-starring Denzel Washington, brought Davis the Oscar for Best Supporting Actress. If Viola Davis gets an Oscar nomination for MA RAINEY'S BLACK BOTTOM, she will become the most Oscar-nominated Black actress in all Hollywood history. It will be her 4th nomination -- following nods for DOUBT, THE HELP and FENCES. That's significant history as it highlights and underscores the lack of film opportunities for Black actresses after they received an Oscar nomination. Look at the majority of Black women nominated for the Academy Award from the 1970s to this 21st Century. They got an Oscar nomination, then had to turn to TV for steady employment. In the 1970s, Cicely Tyson (SOUNDER) and Diahann Carroll (CLAUDINE) were nominees for Best Actress and then TV had work for them. Not Hollywood. The same goes for future one-time Oscar nominees Margaret Avery (THE COLOR PURPLE), Alfre Woodard, Angela Bassett, Marianne Jean-Baptiste (1996's SECRETS & LIES), Taraji P. Henson, Gabourey Sidibe and DREAMGIRLS Oscar-winner Jennifer Hudson. They received rave reviews and an Oscar nomination but their achievement was not met with several good script opportunities afterwards. The same cannot be said of Caucasian actress such as Julia Roberts, Amy Adams and Jennifer Lawrence after receiving their first Oscar nominations. This is a racial inequality in Hollywood story that is never delved into, questioned, investigated and written about by noted film critics and journalists -- male and female -- who are, themselves, in a field that's been predominantly White. However, those same critics are the ones who've been quoted in print ads telling us to see THE COLOR PURPLE, DO THE RIGHT THING, MISSISSIPPI BURNING, BOYZ N THE HOOD, HUSTLE & FLOW, THE HELP, 12 YEARS A SLAVE and GREEN BOOK.

Whoopi Goldbert was a Best Actress Oscar nominee for 1985's THE COLOR PURPLE. She won the Best Supporting Actress for 1990's GHOST. She then reigned for nearly 20 years as the most Oscar-nominated Black actress in Hollywood history. Eventually, the extremely talented Whoopi Goldberg had very few good Hollywood film offers and she also turned to TV, becoming a regular on the hit ABC daytime talk show, THE VIEW. Viola Davis tied Whoopi's record when her performance in 2011's THE HELP brought her a 2nd Oscar nomination. However, after that Best Actress Oscar nomination, she was miffed to find that Hollywood had no other good script offers for her. She, too, turned to TV and starred on the hit ABC prime time series, HOW TO GET AWAY WITH MURDER, for steady employment and exposure. Then came FENCES in which she and Denzel Washington recreated performances that earned them Tony Awards for the Broadway revival. 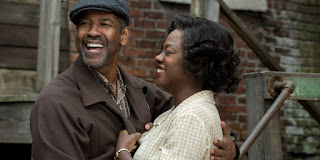 Also getting Oscar buzz for the Best Actress category next year are Sophia Loren for her return to film as a Holocaust survivor who befriends an angry Black street kid in the drama, THE LIFE AHEAD, currently on Netflix and Meryl Streep. Streep who stars in the upcoming upcoming musical comedy, THE PROM, based on a Broadway show. Clayton Davis of VARIETY wrote "...Meryl Streep is irresistible...her chances for securing her 22nd Oscar nomination are looking good." Viola Davis and Octavia Spencer are tied at 3 nominations. I'm hoping Viola Davis makes Hollywood history and secures her 4th Oscar nomination.

Click onto this link to see a trailer: https://youtu.be/ord7gP151vk.