About DOLLY PARTON'S CHRISTMAS ON THE SQUARE

Change. Faith. Forgiveness. That's what at the heart of DOLLY PARTON'S CHRISTMAS ON THE SQUARE, an original holiday musical currently airing on Netflix. I expected this production, which runs 1 hour and 38 minutes, to have more corn than a Kansas City picnic on the 4th of July. Well, it is sentimental without being schmaltzy. To be honest, I had a couple of tears in my eyes come the end of it. If this feature aired on ABC or CBS after a network presentation of the beloved Charlie Brown Christmas special, I'd leave the channel right where it was and enjoy it. DOLLY PARTON'S CHRISTMAS ON THE SQUARE is exactly the holiday tonic we needed, especially in an emotionally, physically and financially brutal year such as 2020 has been. It's something comfortable and warm you can slip into, like a favorite pair of slippers. This mirthful and poignant feature reminds us that Christine Baranski, Treat Williams and Jenifer Lewis, stars of the production, are veteran musical talents Baranski and Williams have Broadway credits. He was in the movie version of HAIR. She was in the movie version of MAMMA MIA! Jenifer Lewis, now a regular on the hit BLACK-ISH sitcom, was one of Bette Midler's Harlettes, her fabulous back-up singers, in her 1970s concerts. You can see Lewis as a Harlette in one of Bette's numbers in BEACHES. Each actor has a number in DOLLY PARTON'S CHRISTMAS ON THE SQUARE. 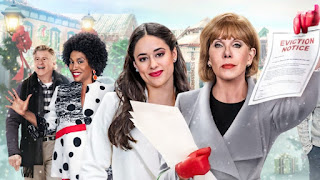 The show also reminds us that Dolly Parton is one of our premier songwriters, a most prolific composer who has written for her country albums, for movies, Broadway and TV. Parton wrote all the songs we hear in the original production, directed and choreographed by Debbie Allen.

Baranski plays the woman who pretty much owns a small town. She's a cold, corporate character who plans to sell the town to make her corporate dreams come true. She plans to sell the town to a mall developer. She's handing out eviction notices at Christmastime along with her version of stimulus checks so that the residents can move on with their lives. Somewhere else. She's a bit like Mr. Potter in IT'S A WONDERFUL LIFE with a dose of Senator Mitch McConnell. Some townspeople have known Regina Fuller for years but they do not know what covered her heart with a hard frost in Fullerville over the years. What changed her?

Christine Baranski is wonderful in the role. She never gets overboard into caricature and me Regina Fuller just a female Scrooge. You see her corporate exterior. You also see a heartbreak behind the eyes. In this fantasy, Baranski makes Regina Fuller a believable character. The story takes place in a small town and director Debbie Allen keeps a cozy small town intimacy and feeling throughout it. Being a Dolly Parton production, there is diversity and inclusion in the town church. The congregation is black, white, brown, young, old, straight and openly. As for Dolly, she appears as a homeless person who's really a Christmas angel.

I absolutely loved the duet Christine Baranski's character has with the little girl, Violet, who helps her bartender dad. Violet calls herself "an old soul." Jenifer Lewis gets a rousing church number that would fit perfectly in real-life church services for moments of praise. Another church number, with the entire congregation singing that Regina Fuller is "The Wicked Witch of the Middle" is a hoot. I repeat -- Dolly Parton wrote all the songs. Here's a trailer.

This year, singer/songwriter/actress/producer donated $1 million to help find a vaccine for COVID-19. To me, she really is a Christmas angel. Next year, President Biden should bestow upon her a National Medal of Freedom.