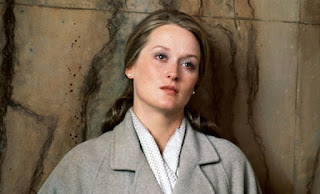 I know the clips you'll see might be ancient to some, but please bear with me. I grew up in South Central L.A., the oldest of three kids in a working class Black family. Dad was a hard-working postal clerk for the city main post office in downtown Los Angeles. Mom was an excellent registered nurse. By today's standards, both were essential workers. We lived in the curfew area during the Watts Riots of the 1960s, an uprising that made national headlines. Years later, I graduated from a parochial high school in Watts. I was not the guy who society would've picked to interview and have lunch with one of the greatest American actresses in modern history. But I did interview her. I did have lunch with her. And each wonderful encounter took me to a different level of my career. The actress is Meryl Streep. If you get cable's TCM (Turner Classic Movies), she will be the featured artist Monday night, September 21st, starting at 8p Eastern/5p Pacific.

The four movies being shown are A CRY IN THE DARK (1988), THE FRENCH LIEUTENANT'S WOMAN (1981), POSTCARDS FROM THE EDGE (1990) and KRAMER vs KRAMER (1979). I fell under the spell of Meryl Streep in a downtown Milwaukee screening room. The opening shot of her as the complicated, loving young mother in KRAMER vs KRAMER, cinematography by Nestor Almendros, made me gasp a little. I felt the new actress' presence.  I felt the character's pain. I was there to see the movie so I could review it. After graduating from Marquette University, I'd landed my first professional TV job. I worked on Milwaukee's ABC TV affiliate, the first Black person in the city's history to be a weekly film reviewer on a local TV station. I did those reviews on Milwaukee's edition of a syndicated show called PM MAGAZINE. I was a part-time employee.

In 1982, Meryl Streep was holding a mini-movie promotion session one Sunday afternoon in a New York City hotel. She was granting 10 television interviews to talk about her new film, SOPHIE'S CHOICE. Granting only 10 interviews was not a diva move on her part. She was pregnant with her first child and experiencing occasional nausea. Her reduced scheduled was totally understandable. I was selected to fly to New York City and be one of the 10. My interview aired as lead national story on PM MAGAZINE, my wonderful boss promoted me to fulltime status and that was the beginning of the doing the kind of work that got me a New York City job offer in 1985. For me, Meryl Streep was a good luck charm. That same year, PM MAGAZINE also aired my interviews of Ben Kingsley, star of GANDHI and Jessica Lange, star of TOOTSIE. Streep, Kingsley and Lange all won Oscars for those films.

I arrived in New York City in 1985 and did two years on a local TV station. Then I got a great offer from VH1. In 1988, my second year on VH1, the network made me the first Black person to get his own weeknight prime time celebrity talk show. A half-hour vehicle. I loved it. In my premiere week, one guest for one whole show was -- Meryl Streep. Her new film was A CRY IN THE DARK. Not A DINGO ATE MY BABY --- A CRY IN THE DARK. By then, she was a cinema sensation, acclaimed for her dramatic work and the owner of two Oscars. I asked her what it is about acting that sparked her passion. Here's a clip.

Actress/singer Liza Minnelli was a huge influence on Streep's acting style when she saw Minnelli on Broadway in a musical directed by Martin Scorsese. Minnelli played a fading film star attempting a comeback in Las Vegas. The 1977 musical was called THE ACT. I asked Meryl Streep about that. Here's another clip.

When publicist saw me interviewing Meryl Streep for a half-hour on VH1, I had no problem booking other A-list guest for our show. Again, she was a good luck charm. Streep couldn't come to our studio because of her schedule. She granted me a half-hour during her A CRY IN THE DARK junket.
One of the Meryl Streep film airing will be POSTCARDS FROM THE EDGE. I read the Carrie Fisher novel, her first book, within a weekend. It's that good. She was already famous as Princess Leia from STAR WARS. Carrie should've been given a Best Adapted Screenplay Oscar nomination because she practically rewrote the story for film while keeping all the characters from the novel and Suzanne Vale's basic rehab and Hollywood comeback tale. And Carrie Fisher expanded the role of the veteran movie star mother who is only in about ten pages of the book, a minor character. Carrie went more into her relationship with her veteran movie star mother, Debbie Reynolds, when she wrote the screenplay. Because the screenplay was different from the novel, Carrie wanted to call it HOLLYWOOD AND VINE. Director Mike Nichols told her, wisely, to stick with the original title. Carrie Fisher and Debbie Reynolds were both guests on the VH1 show that prompted execs to give me my own show. They're both in this reel talking about POSTCARDS FROM THE EDGE. Take a look.
Shirley MacLaine was a guest on my 1988 show. She had just started rehearsals for POSTCARDS FROM THE EDGE and raved about how "fascinating" Meryl Streep was. She also charmingly confirmed that she was slated to star in MGM's deluxe 1964 musical, THE UNSINKABLE MOLLY BROWN. However, there was a contractual glitch and Debbie Reynolds went after the role. On the show, MacLaine told me that Debbie contacted her and said that the MGM musicals era was coming to an end for her, but Shirley would go on to other good roles. Which was true. MacLaine won the Best Actress Oscar for 1983's TERMS OF ENDEARMENT. MacLaine added that it was "karma" for her to be playing Doris Mann, the role based on Debbie Reynolds, the role Debbie Reynolds wanted to play, in POSTCARDS FROM THE EDGE. 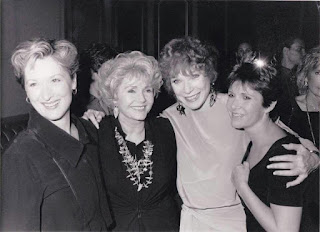 My third encounter with Meryl Streep was at a New York City film awards luncheon in 1999. I was booked to host and present a Star of the Decade award to Streep. I was in my fourth year as a regular on the local weekday morning show GOOD DAY NEW YORK. I'd done some good work. Several items I broke in my celebrity interviews got picked up by national press. However, new management had been installed and, for 1999, my contract had been renewed -- for $10,000 less. Take it or leave it. I was not making a "TV star" salary to begin with --but I took it because I was paying my rent and the mortgage on our divorced single mom's new house. I was humiliated by the pay cut. I took a part time job to help me keep paying Mom's bills. When I got to the luncheon, I discovered I'd been seated right next to Meryl Streep for lunch. I was nervous about just walking over and sitting down next to door. I wouldn't do it. The two men who booked me for the event walked with me over to the table so I could be introduced before sitting.
Meryl Streep looked at me, smile and said "Where do I know you from?" I sheepishly mentioned our first interview. When I mentioned the second, the VH1 show, she enthusiastically responded "That's it! You asked some pretty good questions there, young man."
I'd been complimented by the goddess of all that is good about screen acting -- Meryl Streep. Not only that, during lunch, she chatted with me as if we were old college buddies. She was hysterically funny.
My contract was up again. The station wanted to renew for another year. With no raise. I decided to walk away. The executives may not have felt my work was special, but Meryl Streep did. Her compliment gave me the courage to walk away, positive that I could do better for myself. I never, ever regretted that choice. 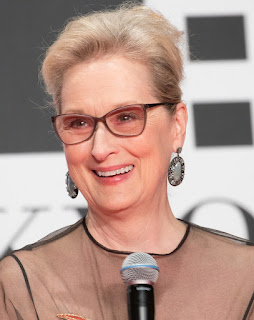