This was such a historical week in network television that my parents let me stay up late on a school night to see some of it. The famous host of NBC's TONIGHT Show, Johnny Carson, was on vacation for a week. He let Harry Belafonte sit-in as his guest host for that week in February 1968. In a racially turbulent and politically intense decade, a famous Black entertainer was segregating the field of nighttime hosts on network TV -- at least, for that one week. Top name show biz talent appeared with Belafonte. He also booked presidential hopeful, Senator Robert F. Kennedy. In addition to Bobby Kennedy, Harry Belafonte book his dear friend and fellow civil rights activist, Dr. Martin Luther King, Jr. 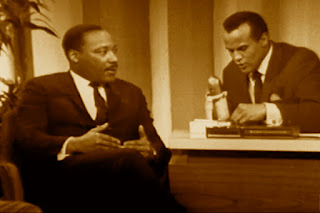 Again, this was a week in February 1968. In April that same year, Dr. Martin Luther King Jr. was shot and killed. In June that same year, Sen. Bobby Kennedy was shot and killed. Yes. It was a racially turbulent and politically intense decade. Also in 1968, Belafonte was the special guest on Petula Clark's NBC music/variety special. Network execs had forbidden her to touch Belafonte during their duet. The network executives were afraid they'd lose sponsors if there was interracial touching. Petula Clark was executive producer of the special. She did what she bloody well wanted. Pet defied NBC execs. She sang with and touched Harry Belafonte. 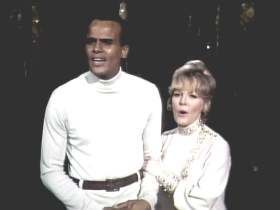 Writer/producer Joan Walsh and director Yoruba Richen revisit that historic week in a new documentary called THE SIT-IN. I am extremely proud to have helped those two extraordinary women a bit in the production of it. Watch the trailer:

When Johnny Carson died in 2005, a longtime film critic and entertainment reporter did an obituary feature on local and network NBC. He pretty much credited Carson with booking and conducting the Dr. Martin Luther King interview. That error put a major knot in my neck because I remember watching Belafonte with Dr. King on the TONIGHT Show when I was a kid in South Central L.A. That Caucasian journalist had overlooked some major Black history that occurred right there in 30 Rock in 1968. And no one corrected him.

If you see THE SIT-IN, you'll see me give a soundbite or two in the documentary. Here's the backstory as to how I became involved with the wonderful Joan Walsh: I had written blog posts about the fact that Harry Belafonte hosted the TONIGHT Show for a week in 1968 and he was the one who went up against network brass opposition to book Dr. King as a guest. NBC execs were afraid they'd lose sponsors if Dr. King sat down and started talking about civil rights. After my three years as a veejay and talk show host on VH1 -- three of the happiest years of my career -- a fellow former VH1 employee introduced me to Chiz Schultz. Chiz was aware of my VH1 work. We met, hit it off like old neighborhood buddies, and had dinner. Chiz was on the TONIGHT Show production team the week Belafonte hosted. That week was the beginning of their long, beautiful friendship. Chiz left the late night NBC show.  He went on to co-produce the 1970 film, ANGEL LEVINE, starring Harry Belafonte and Zero Mostel. Chiz was also a producer of 1984's A SOLDIER'S STORY which was an Oscar nominee for Best Picture of 1984. He's in the list of producers for Spike Lee's current film airing on Netflix, DA SWEET BLOOD OF JESUS.

In 1991, I asked to be a guest host a few times on CNBC's early live Saturday night hour-long talk show. I asked Chiz Schultz to come on for one appearance to talk about working with Harry Belafonte that memorable NBC week. He was a terrific guest and confirmed that NBC execs considered Dr. King, a Nobel Peace Prize recipient, to be "too radical." Joan Walsh went online and found a blogpost I wrote about about on TONIGHT. She contacted me. I gave this info to Joan, she took the ball and ran with it to make a touchdown.

I was contacted by WNBC local news execs to round-out the early morning trio of a new show, WEEKEND TODAY IN NEW YORK. I was there from its premiere episode in September 1992 to January 1995. I quit because one Caucasian producer felt I didn't have "the skills" to do film reviews and cover entertainment on a regular basis. (I wanted to do weekly film  reviews because Black people are rarely seen doing film reviews on TV -- and I did weekly film reviews on the ABC affiliate in Milwaukee in the early 80s. As for covering entertainment, I had my own talk show on VH1 and I'd been a guest host on CNBC.) The news director, at that time, told me that my work was excellent and I was popular with viewers. But, I would only be a part-time employee, never full-time, and I would not advance to NBC network exposure. I'd only be local on weekends. The day he told me that, I gave my two weeks notice. As a Black person there, I felt I was not subject to equal opportunities. I walked away from a hit show.

Seeing Harry Belafonte sit-in for Johnny Carson made a tremendous impact on me when I was a kid. THE SIT-IN airs on MSNBC Saturday, September 12th at 10p Eastern/9p Central. If you can, please watch. With deep gratitude, I thought of the door Harry Belafonte opened when I had my own prime time celebrity talk show on VH1 in 1988. I was the first Black talent to get his own weeknight talk show on VH1. Here's what I did: