She was the first African American to receive an Oscar nomination for Best Actress. The movie was the 1954 musical drama, CARMEN JONES. She did not win, but Dorothy Dandridge totally deserved that Oscar nomination. If you get cable TCM (Turner Classic Movies), you can see her performance in that film on September 13th at 8p Eastern/5p Pacific. Dorothy Dandridge is the TCM Star of the Month. The discussion and presentation of her work begins that night. She was talented, serious about her craft and blocked by Hollywood racism. When I was a kid in Los Angeles, my parents talked about Dorothy Dandridge a lot. They were in awe of her talent. They'd say was that "the Dandridge girls" were constantly studying and taking classes to improve their skills. By the time she got her Oscar nomination, Dorothy was a Hollywood veteran. 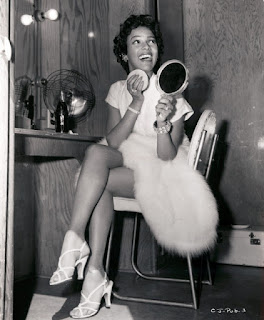 In the 1937 Marx Bros. comedy, A DAY AT THE RACES, Dorothy and her sister can be spotted in the "All God's Children Got Rhythm" musical number. In the 1941 Fox musical comedy, SUN VALLEY SERENADE, she's a knockout singing and dancing "Chattanooga Choo Choo" with the Nichols Brothers, one of whom she married. In the 1941 wartime desert drama, SUNDOWN, she had one of her earliest roles as an African. She's lovely as the African princess. Early in the film, Dandridge was scenes opposite the star of the film, glamorous Gene Tierney. Dandridge has a bit part as a wife and mother saying goodbye to her soldier husband in the World War 2 drama from 1944, SINCE YOU WENT AWAY. Hattie McDaniel, the first Black person to win an Oscar (for 1939's GONE WITH THE WIND) has a supporting role in the film.

In featurettes about Dorothy Dandridge that air on TV, I notice a similar tone in them. We're reminded how gorgeous she was, how talented she was, how great a groundbreaker she was when she got her Oscar nomination and how restricted her career was afterwards because of Hollywood discrimination. That tone is accurate. However, they seem to end with an attitude of "As we celebrate her legacy, aren't we glad that old Hollywood inequality is gone?" I say, "Is it?" After her 1954 breakthrough in Fox's CARMEN JONES, she didn't have another sizable role in a Hollywood studio film until Fox's 1957 romantic drama, ISLAND IN THE SUN. As in CARMEN JONES, she has scenes with Harry Belafonte but she is not the leading lead in the movie. It's an ensemble piece. Dandridge was not billed above Joan Fontaine who played the romantic interest to Belafonte. Fontaine, by the way, received her share of racial hate mail for daring to play a sophisticated woman who gazes romantically at a handsome, sophisticated Black man. Go to Netflix and hear Harry Belafonte talk about it in the 2018 docu-series THEY'VE GOTTA HAVE US. 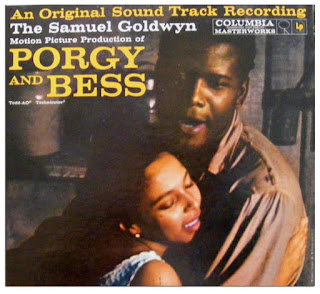 The next lead star role Dorothy Dandridge had in a Hollywood film shot in Hollywood was in 1959's PORGY AND BESS. Like 1954's CARMEN JONES, it was a musical drama directed by Otto Preminger. PORGY AND BESS was Dandridge's last film. All sorts of legal red tape keep PORGY AND BESS from being aired on TV. But I've seen it about a half dozen times. Yes, there are some racial stereotypes and tropes in the story that the actors work hard to crack -- the loyal Christian Black man, the oversexed Black buck, the wanton woman and such. Nevertheless, what makes make gasp each time I see it is the undeniable star quality and talent of gorgeous Dorothy Dandridge. Damn Hollywood's racial exclusion. Dandridge died in 1965 at age 42. 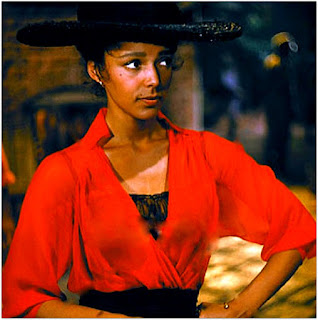 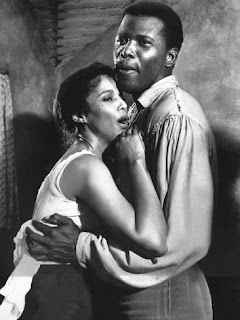 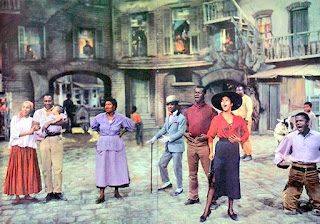 I've written before about the lack of equal opportunities for people of color -- especially film actresses. I've noted how many received one Oscar nomination -- maybe even won the Oscar -- and had to turn to TV for steady employment because Hollywood had no other good opportunities. 1961. Rita Moreno was a standout in the Tennessee Williams drama, SUMMER AND SMOKE, and in the musical, WEST SIDE STORY. That classic musical brought her the Oscar for Best Supporting Actress. Then, as she revealed when she was guest on TCM, she didn't movie work for about seven years. No Hollywood offers after she won the Oscar. She eventually went to TV. Black actresses Cicely Tyson, Beah Richards, Diahann Carroll, Angela Bassett, Alfre Woodward, Whoopi Goldberg, Taraji P. Henson, Gabourey Sidibe and Viola Davis all went to TV for steady employment after getting Oscar nominations. Notice I wrote "Black" not "African American." That's because the Black British actress, Marianne Jean-Baptiste, was floored by the lack of film work offers after her Best Supporting Actress Oscar nomination for 1996's SECRETS & LIES. She booked a CBS TV series.

For 20 years, Whoopi Goldberg, whose first Oscar nomination came for 1985's THE COLOR PURPLE, was the most Oscar nominated Black actress in history. With just two nominations. The talented and Caucasian Jennifer Lawrence is only 30. She has one Oscar and four nominations to her credit. Gifted Amy Adams has six nominations to her credit. Both she and Jennifer Lawrence got more good film script opportunities than Black and Latina actresses. Viola Davis and Octavia Spencer are now the most Oscar-nominated Black actresses with three each. 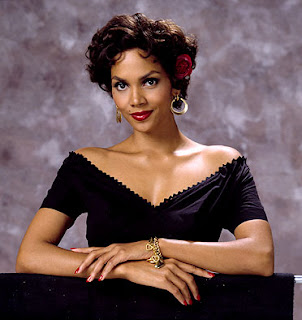 Halle Berry slammed across one of finest performances as the late Dorothy Dandridge in HBO's 1999 biopic, INTRODUCING DOROTHY DANDRIDGE. For her dramatic grit in the 2001 film, MONSTER'S BALL, Halle Berry was a groundbreaker as the first Black woman to win the Oscar for Best Actress. She is the only Black woman who has won the Oscar for Best Actress.

This week I read in VARIETY that Halle Berry wanted but did not get a 007 spin-off for her Jinx character from 2002's DIE ANOTHER DAY James Bond adventure. MGM would not finance an $80 million action thriller for a Black female lead.

Also this week, on Sept. 10th, came a report on a new study from the USC Annenberg Inclusion Initiative. The study says that Black women were "missing" from a third of 2019's top grossing films. The absence of Latina and Asian women was even greater.

Why haven't entertainment journalists been investigating the modern-day lack of equal opportunities? Why didn't they ask top studio execs why they felt Black stories and Black actors were not marketable? Why haven't entertainment journalists contacted the top talent agencies to see if any of their agents are Black? Why haven't they asked top agents if if they represent Black talent and if they push for their clients of color to get equal opportunities? Why weren't prestigious film critics writing about these issues in their columns or delving into them in their news program segments? On Netflix, I watched the Chelsea Handler special called HELLO, PRIVILEGE. IT'S ME, CHELSEA. In it, Chelsea heads out to see how her career has benefitted from white privilege. In the first 10 minutes, she talks to Kevin Hart and Tiffany Haddish. Both of them mention how, when they were working hard in comedy clubs, they had to ask their white buddies for help getting an agent. Their white performer friends had agents and they didn't. I experienced and did the same exact thing. Even when I was on Food Network Mondays thru Fridays every week and doing weekday early morning live national radio with Whoopi Goldberg from 2006 to 2008, broadcast agents turned me down saying "I wouldn't know what to do with you."

Dorothy Dandridge did not get the number of starring roles she deserved. She was blocked by Hollywood color barriers, barriers that still existed as the second decade of the 21st Century began. The playing field has yet to be leveled. The legacy of Dorothy Dandridge still matters.