February is Black History Month. Here's some bold and impressive history that you did not hear on TCM (Turner Classic Movies). I mention the popular classic film movie channel because it relates to a film that has aired several times on TCM.  The movie is the 1961 screen version of A RAISIN IN THE SUN, a film that had actors from the original Broadway cast repeat their stage roles in the movie. Lorraine Hansberry, the late African-American dramatist, made history when her play was produced on Broadway and met with critical acclaim. It starred Sidney Poitier, Ruby Dee, Claudia McNeil, Diana Sands and Lou Gossett Jr. 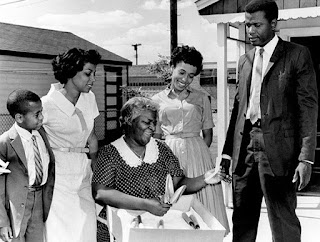 Back in 2017, TCM celebrated Pride Month with an accent on gay community history in Hollywood. Being a member of that community, I had a keen interest in watching this June 2017 series. Each Thursday evening, Dave Karger, one of the all-Caucasian quartet of TCM hosts, presented the TCM Spotlight on Gay Hollywood focusing on LGBT celebrities such as Montgomery Clift, Rock Hudson, Tab Hunter and Anthony Perkins. The works of other artists were brought into the spotlight. Dave Karger hosted airings of classic movies based on plays from gay playwrights. We saw CAT ON A HOT TIN ROOF based on the play by Tennessee Williams, WHO'S AFRAID OF VIRGINIA WOOLF? adapted from the Edward Albee play and the movie version of Harvey Fierstein's TORCH SONG TRILOGY.

I watched each night of Dave Karger's TCM Spotlight on Gay Hollywood to see if there would be any black representation. There was not. No black representation at all. And there could have been.  Lorraine Hansberry was a playwright, a social activist and openly lesbian. I don't know if young Mr. Karger was aware of that, but A RAISIN IN THE SUN could have been included in his movie line-up for that Pride Month special series. In addition to writing the play, Lorraine Hansberry wrote the screenplay for the film released by Columbia Pictures. 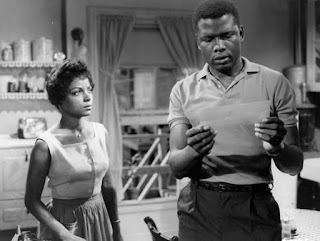 THAT is rare, major history. A black woman wrote a Hollywood screenplay -- in the early 1960s.  Her screenplay was based on her landmark hit Broadway play that debuted in 1959. 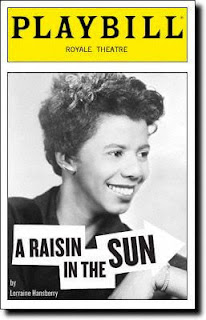 To learn more about the young, gifted and black Lorraine Hansberry, a talent taken from us way too soon by cancer in 1965, there was an excellent documentary that aired on PBS a couple of years ago.  It's called LORRAINE HANSBERRY: SIGHTED EYES/FEELING HEART.

It is an absolutely fascinating documentary. Look for it online and watch it.  I was lucky enough to interview Oscar winner Lou Gossett Jr. in his L.A. home back in 2012. He knew Hansberry. He was in her play and in her film adaptation of it. I asked him who should play Lorraine Hansberry in a biopic feature film if one was made on her life and, quicker than a heartbeat, Gossett's enthusiastic reply was "Taraji P. Henson."

There you have it.  Some Black History, some LGBT history and some Hollywood history all made by the same talented black woman -- the late, great Lorraine Hansberry.
at February 05, 2019