What a SAUSAGE PARTY 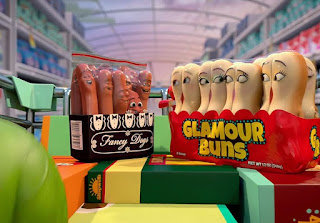 At the end of this feature -- which does have some storyline cleverness -- I found myself saying, "He is one brilliant, versatile actor."

SAUSAGE PARTY is something you could watch for counter-culture entertainment on the 4th of July.  Folks are shopping for their July 4th cookouts and such. The story opens when the large supermarket is closed, dawn is breaking and all the supermarket food items are about to sing their daily upbeat morning song.  It's a song of hope and thanks to the gods.  They're excited that they may be purchased and taken to a Garden of Eden-like paradise in the Great Beyond.  The Great Beyond is that place on the other side of the supermarket doors. 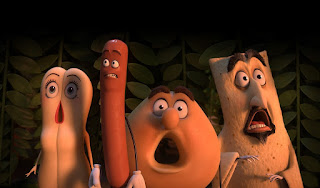 They have no idea that their fate is to be peeled, sliced, boiled, grilled, microwaved, squirted and eaten.  Up till then, they only thing they feared was their expiration dates.  When the real truth is learned, they must fight for survival and then embrace the lives they have, while they have them, without prejudice and conservative attitudes.  SAUSAGE PARTY is clever and memorable not in an innocent Disney or Pixar way, but in a way that gives you fast-paced, sexy anarchy.  Like a subversive 1940s Tex Avery working without Hollywood production codes in this 21st Century.
Now...about the "...one brilliant, versatile actor" comment I made.

Did you see AMERICAN HISTORY X, the 1998 Oscar-nominated film about a young neo-Nazi skinhead who winds up in prison?  Did you see the rich and under-appreciated 2006 adaptation of Somerset Maugham's THE PAINTED VEIL set in 1920s London and China?  Did you see THE GRAND BUDAPEST HOTEL and the Best Picture of 2014 Oscar winner, BIRDMAN?

It wasn't until I was reading the closing credits did I see that the voice of the Woody Allen-esque bagel in SAUSAGE PARTY was done by the actor who gave a distinct character performance in each one of those four films I named.

Sammy the Bagel was voiced by …. Edward Norton.  Ed Norton starred in and co-produced THE PAINTED VEIL.  It made my list of the Top Ten Films of 2006.  This is quality of big, mature, well-written and well-acted film Hollywood used to give us back in the day.  If you've never seen it -- and you're an Ed Norton fan -- make it a weekend must-see.
He's an amazing actor.  Ed Norton's vocal work as a bagel alone is a reason to sit through SAUSAGE PARTY.  Well...that and seeing a lesbian taco get lucky.  And a box of grits in a 3-way.