Sigourney Weaver as Officer Ripley is my favorite action movie hero.  In the science fiction movie category, ALIENS -- like 1935's BRIDE OF FRANKENSTEIN -- is a rare case of the sequel being just as good, if not better, than its excellent and groundbreaking original.  ALIENS brought Sigourney Weaver an Oscar nomination for Best Actress.

For a long time, a supporting character in ALIENS has made me think of NBC in our current age of a former NBC reality show host now living in the White House and running the country.  The character is a corporate weasel, very well played by Paul Reiser, named Burke.  Ripley would like to punch Burke all the way to another planet. 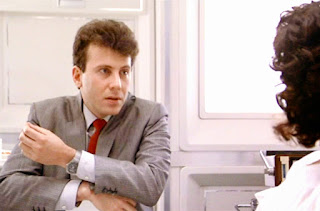 She realizes that this corporate lackey is responsible for alien creatures being loose to kill and multiply.  Financial greed fueled his irresponsibility.  Remember those nasty alien facehuggers that attached on a human's face and made the person a host for a new alien?  Burke is behind a couple of facehuggers being onboard in the sequel.  In 1979's ALIEN, Ripley saw the horror in store if those creatures are not killed.  Burke says: 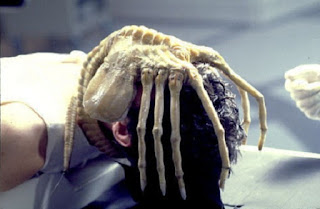 "Look, those two specimens are worth millions to the bio-weapons division.  Now, if you're smart, we can both come out of it as heroes and we'll be set up for life."


"You're crazy, Burke, you know that?  You really think that you can get a dangerous organism like that past ICC quarantine?"

We see what happens to the crew -- and to Burke.

I've been doing TV work a long, long time.  In a standard TV performer contract, there's a morals clause.  This basically says that you will behave yourself and not do anything that will tarnish the reputation of the TV product and/or station.  You've probably heard about the standard morals clause.  Back in 1994, I had to do a liveshot covering a low-budget traveling circus up from Florida. I was to interview some of the circus folks on our local WNBC weekend morning show.  One stone-faced, tattooed character called "Uncle Grumpy" had a huge pig in his act.  While Uncle Grumpy, the pig and I were on live local TV, the pig started squealing to high heaven after Uncle Grumpy suddenly whacked the pig on the butt with a stick.  I jumped back and said, "Jeez!  He sounds like Ned Beatty in DELIVERANCE!"

My cameraman started laughing. So did the audio guy.  In my earpiece, I could hear laughter in the control room.  The show's anchor in the studio was laughing too.

Not one single person complained about my wisecrack.  Not one. No call of complaint came in to the WNBC switchboard.  But my boss, the WNBC news director, was livid about what I said that he threatened to fire me, citing the morals clause of my contract.

Fast forward to Donald Trump, host of NBC's THE APPRENTICE and CELEBRITY APPRENTICE.  When he was network talent, he repeatedly made news claiming that President Barack Obama was not a real American.  He demanded to see the President's birth certificate.  We African-Americans were furious with that disrespect and its undercurrent of racism.  I heard no mention of a morals clause and he certainly wasn't threatened with suspension or termination.  When he accused Mexicans of being murders and rapists that was another uproar.  As well it should have been.  He got fired because of that.  But remember this:  NBC had purchased Telemundo for nearly $2 billion.  Telemundo viewers were furious with Trump's comments about Mexicans.  NBC had to protect its extremely expensive investment and let Trump go.  It was a network move for cosmetic purposes, I felt.  He was no longer the host of THE APPRENTICE but he was still given star treatment by the network.

Personally, Donald Trump's constant and loud disrespect for President Barack Obama was a red flag.  But NBC let the host of THE APPRENTICE get away with it because he was good for ratings and revenue.  Then that red flag got redder when he insulted Mexicans.  Then he went into politics.

Look at the Trump presidency today.  He's called accomplished African Americans people of low IQs.  He called Africa a "shithole" country.  He pretty much complimented the KKK after the racist attacks in Charlottesville, Virginia.  There are immigrant Hispanic children, separated from their parents, in detention cages. He's given little compassion to hurricane-ravished Puerto Rico.  His disrespect for Sen. John McCain was unforgiveable.  His disrespected the Vietnam veteran in life, saying that he wasn't a hero because he got caught by the enemy.  He disrespected him again by not flying the White House flag at half staff after the Senator succumbed to brain cancer.

He's called America's free press "the enemy of the people."  He trashes the very network that gave him a TV reality game show that made him a TV star and calls the network's journalism department "fake news."  It's like NBC created a monster and the monster turned on its creator.

Watch ALIENS again.  The NBC exec or execs who hired Trump, made him a TV star and never used the morals clause to address his constant public disrespect for President Obama remind me of Burke in ALIENS.  Burke put his corporate lust for a financial percentage above doing the right thing.