Hollywood pays attention to box office receipts.  We people of color need to have each other's backs and help each other out, especially considering the recent reports on inclusion that were released.  CRAZY RICH ASIANS, a big budget Hollywood romantic comedy with a predominantly Asian-American cast, opens this month.  Members of the cast grace the current cover of THE HOLLYWOOD REPORTER.  The lead actress is Constance Wu, whom I absolutely adore as the over-achieving suburban mom on the ABC sitcom, FRESH OFF THE BOAT.  I want this movie to hit her career with a great, big, beautiful bolt of electricity. 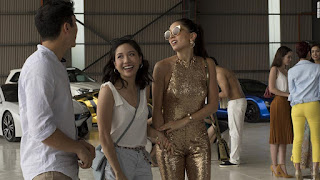 Rarely do we get a major Hollywood release featuring a large Asian-American cast of actors.  I cannot wait to see CRAZY RICH ASIANS. 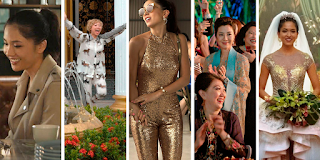 For about three years now, diversity has been a Hollywood hot point.  Long story short, the playing field has not been level for people of color seeking Hollywood employment.  And, I might add as an insider, it has not been level for people of color in the TV industry either.  Film is my passion.  However, after my VH1 years as a celebrity talk show host, the biggest and thickest color wall I hit when I worked in the local and network New York City news arena from 1992 to 2000, was when I wanted to do film reviews on a regular basis. There was always resistance from white execs in the news department.  I arrived in New York City in 1985 with four years of regular film reviewer TV and print credits on my resume.  In fact, it was some of that film review work that got me my first New York City job offer that blessedly yanked me away from Milwaukee's ABC affiliate.  But, white TV execs in New York City news departments were quicker to let Cody Gifford, a college guy who'd taken a film course in his previous semester, do weekly film reviews on TODAY (which he did as his proud mom, Kathie Lee, watched) than let an experienced person of color have the same opportunity. And I was not the only Black, Latino or Asian-American film reviewer frustrated by the lack of equal opportunities on TV.

Last month, July 16th, Tre'velle Anderson of The Los Angeles Times did an excellent and much needed report on the lack of race and gender diversity in the field of film critics.  In a video, we see 14 crticis of color speak out on the need for inclusion in their field.  And those were just critics of color in just L.A. alone!  Imagine if the many frustrated minority critics I've seen over the years at screenings in New York City were interviewed too.

Yesterday, the Annenberg Inclusion Initiative reported that despite the hard push of former Motion Picture Academy President Cheryl Boone Isaacs to get more racial diversity into its membership, despite "Oscars So White," despite Frances McDormand telling people that they that can request "inclusion riders" to insure race/gender equality in production teams -- something McDormand stated in her Oscar acceptance speech early this year --  despite all that... the needle has not moved much in a favorable direction for inclusion.  People of color, women, the LGBT community and the disabled continue to be served slim pieces of the pie. White guys still get the big slices.

I strongly feel that diversity and inclusion are sorely, critically needed in those executive branches populated by the folks who do the hiring, do the programming and are the people who can green light a project.  That's where we need the race and gender diversity -- whether it's a Hollywood studio office, a top talent agency boardroom, a network TV news department or a movie channel.  We also need our liberal buddies -- the ones who are constantly employed -- to look around, to really look around, notice that the playing field is not level and call out the inequality.

In the meantime, we need to help each other out.  Support CRAZY RICH ASIANS when it opens August 15th.  Give it some box office love and power.
Also support SORRY TO BOTHER YOU from Boots Riley, BLINDSPOTTING...and Spike Lee's newest also opening in August, BLACKkKLANSMAN.
at August 01, 2018