"Power to the people."  "Stick it to the man."  Touchstone youth slogans of the anti-establishment 1960s are a family philosophy in CAPTAIN FANTASTIC.  Don't let the title throw you.  This is not another comic book-based action movie.  This is an intelligent, bold independent film about a very independent family in the Pacific Northwest.  The father and his six kids live off the grid.  When the story opens, you think you're in for sort of a LORD OF THE FLIES goes to THE MOSQUITO COAST with THE PARTRIDGE FAMILY.  But stay with it.  This good story that tells you that it's not just enough to know how to survive.  You have to find balance.  Ben is sort of a daily drill sergeant to his kids.  Like the Lou Gossett character in AN OFFICER AND GENTLEMEN.  These kids are not addicted to video games and texting.  They're pushing themselves and growing stronger in daily rigorous survival training in the woods.  They can hunt for food in the woods.  They're rock climbing.  They have a knowledge of classical music. They are avid readers and outspoken critical thinkers.  They're home-schooled.  Every year they celebrate the birthday of Noam Chomsky.  Yes, Ben is a very off-the-grid dad.  The mother, the woman he loves, is hospitalized.  Viggo Mortensen delivers a rich, smart and totally believable performance as this complicated parent. 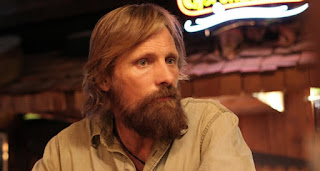 The mother's condition forces the family to leave the forest isolation, get on their family bus and venture into towns.  He'll eventually have to take the kids to visit suburban relatives.  Those relatives are mainstream.  Their kids are glued to video game screens and can barely hold a conversation with the one language they speak.  They're no match for their wilderness cousins who speak more than one language -- including Esperanto.  And there's nothing like a family meal at the dinner table for revealing for vastly different people in the same family are.  By the way,  Ben's family bus is practically a library on wheels.  His kids don't own cellphones or computers.  Residents in the suburbs most definitely view them as eccentric. 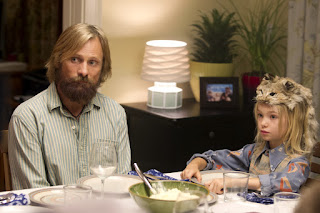 When this unusual family comes in contact with everyday civilization as we know it, the road gets bumpy.  I was reminded of a line Woody Allen's character says in the movie ANNIE HALL:  "You know, it's one thing about intellectuals, they prove that you can be absolutely brilliant and have no idea what's going on."  Admit it.  Haven't you occasionally felt that while listening to National Public Radio -- or watching JEOPARDY?  I remember one edition of that game show on which the three contestants knew all about the Aztecs, Greek philosophy, famous composers, rocket science and Russian literature.  But they were all stumped when the category was the old TV sitcom, "Gilligan's Island."  That applies to Ben's children because of their upbringing.

Ben's kids are strangers to fast food.  His oldest son doesn't know the regular guy etiquette of how to act after a first kiss.  And the match for Ben's wilderness survival skill smarts is an older gentleman in an expensive suit.  His father-in-law.  Here's a preview of CAPTAIN FANTASTIC.

Will Ben have the humility to get out of his own way and create a new balance within his family?  Or will he stay an unyielding captain of his fantastic counter-culture unit?

The film was written and directed by Matt Ross.  You may not know that name.  But, if you were a big fan of the series BIG LOVE on HBO as I was, you will recognize his face. 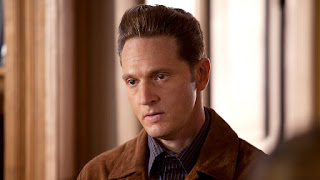 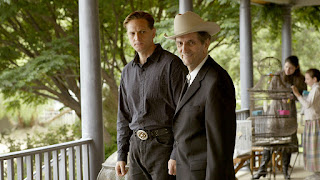 Ross played Alby, the polygamist rival to the show's main character played by Bill Paxton.  This shoot must have been difficult for Ross, even though the movie seems like it would be simple one to film.  There's not a lot of room on the family bus and there are key scenes in it with a half-dozen actors.  That doesn't leave much room for a camera crew.  As for the youngest kids in the cast, they have to play little critical thinkers and come off as intellectual without seeming precocious.  High praise goes to Matt Ross for his screenwriting and direction. He gives us an original story -- one with compassion, spirit and humor.

The supporting cast is first-rate.  A standout is George MacKay as the brainy oldest son.  Another is Kathryn Hahn as the suburban relative.  Hank gets cast in many comedies.  She'll soon be seen in the comedy BAD MOMS.  Her funny lady chops are sharp.  However, when the script calls for a serious, emotionally raw moment, Hahn can deliver the goods as she does in this film.  Frank Langella is excellent as the immovable grandfather.