THE LEGEND OF TARZAN: Hollywood & Vines

One review I read before the movie opened called it "turgid."  Another unfavorable review wondered who the audience for this new Tarzan adventure would be.  Well, I saw the movie.  I wouldn't call it turgid.  But, during the first 45 minutes, I did also wonder who the audience for it would be.  And then it hit me during the remainder of this film that runs 1 hour and 50 minutes.  THE LEGEND OF TARZAN starring the tall, blond and awesomely ripped Alexander Skarsgard (formerly of TRUE BLOOD on HBO), is Saturday matinee at the movies entertainment -- the kind I would've totally enjoyed when I was in my middle or early high school years.  It's action-packed and beautifully photographed.  The special effects are quite impressive.  Skarsgard is good and good to look it.  This Tarzan adventure, like the one that starred Christopher Lambert as Lord Greystoke back in 1984, take place in the 1800s.  We're now in London over halfway through the 1800s.  That's the time period but this Tarzan has a modern-day attitude.  He says things like "We're screwed."  That's a line Olympic swimming champ-turned-actor Johnny Weissmuller never said when he swang to Hollywood stardom as Tarzan for MGM in the 1930s.  The character created by Edgar Rice Burroughs first hit the big screen during the silent movie era.  He really became famous when Austrian Weissmuller donned a loincloth, did a jungle yell and proceeded to swing on vines as a mode of African transportation.  Skarsgard is a different Tarzan. 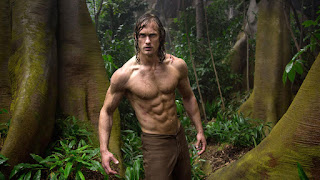 He also swings, but he's been repackaged for today's audience and times.  There are echoes of modern diversity issues mixed in with the monkey business. 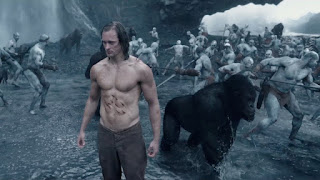 He's on the big screen but he has a lot more in common, attitude-wise, with the Tarzan we used to see Friday nights on NBC.  Remember Ron Ely as The Ape Man in the 1960s?  He was sort of a Malibu Tarzan.  Diana Ross and The Supremes made a guest appearance as Catholic nuns on that series. 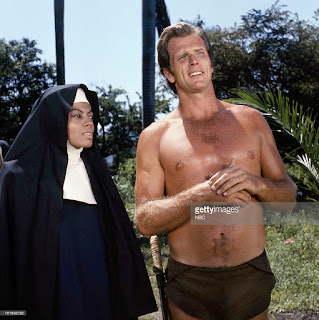 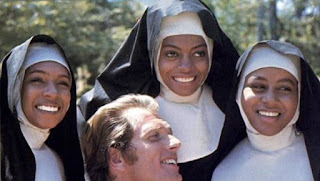 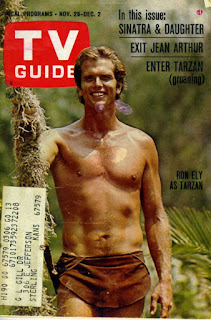 Broadway legend Ethel Merman also made a special guest appearance in a 2-part episode.  Unfortunately for her fans, she didn't do the Tarzan yell.  Here's a photo of Merman taken the day she became Mrs. Ernest Borgnine.  Seriously. 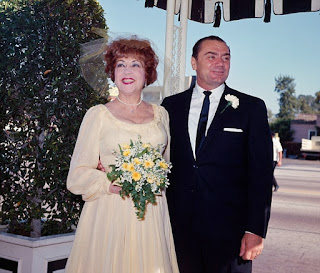 In the popular MGM Tarzan franchise of the 1930s and early '40s, Tarzan and Jane would battle villains who came to the Congo to poach ivory or commit other greedy, abusive crimes.  In this new Hollywood adventure, Lord Greystoke returns to his jungle roots and friends.  He grabs a vine and swings into action to fight systematic racism in the Congo.  Yes, this is not your grandfather's Tarzan.  Jane, played by Margot Robbie, is a spunky mate who speaks the African language and can throw a mean punch if anyone messes with her jungle native friends.  Tarzan's sidekick in this story is Samuel L. Jackson as the real life character, George Washington Williams.  The diamond-hungry villain is played by Christoph Waltz who, again, makes a very good bad guy.
In its comic book way, this Tarzan movie has a "Black Lives Matter" underline to it.  What motivates Greystoke back to the jungle is the abusive colonization by King Leopold of Belgium.  The king wanted diamonds and sought to control the Congo which meant the enslavement of African natives as workers.  This is a historical fact used as a dramatic engine in this action/adventure screenplay.  The "sidekick" character also was a historical figure.  George Washington Williams was a Civil War veteran, a politician, a journalist and a bit of a rogue.  Reportedly, he went to the Congo and was shocked by the suffering he saw caused by King Leopold's colonization.

So...a big question is....Why is this character a sidekick?  With his history, why can't a major studio like Warner Brothers give us Samuel L. Jackson as the star of a George Washington Williams biopic? 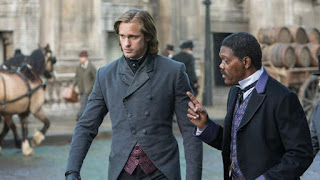 I knew what the intended audience was as I watched Jackson's energetic and entertaining performance.  There's no nudity in this film.  There's no graphic, gory violence. There's no X-rated bad language from Samuel L. Jackson.  He does have the saltiest line in the entire picture -- and that comment is a funny one that refers to a male gorilla's reproductive anatomy.  THE LEGEND OF TARZAN is purposely PG-13.  It's meant to entertain kids and, hopefully, introduce them to a bit of history that they'll be interested enough to research at school, in a library or online.

This film shows respect for the African culture.  We hear the distinctive Tarzan yell that Johnny Weissmuller made famous in the 1930s movies. 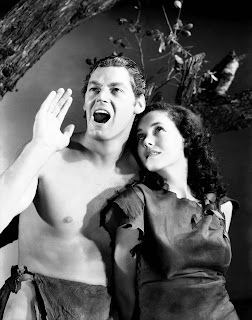 It's the yell that Carol Burnett delightfully imitated frequently on her CBS variety series.  But we do not see archaic, embarrassing Hollywood images of natives like there were in Old Hollywood films.  The natives here have a culture, a culture that Tarzan grew up with, learned and respected.  He grew up with, learned from and loved the people.  The same goes for Jane.  He's not their King of the Jungle, not their superior.  He's one of them in this adventure.  And Tarzan can still communicate with animals.  We see black native men who are multi-lingual -- and in danger of becoming slaves.

Again, THE LEGEND OF TARZAN is Saturday matinee at the movie fare for the kids that's full of action and has a bit of history that's good for them to know.  And it has a black character played by an Oscar nominated black actor who should play him again in a big screen biopic.