Bryan Cranston as THE INFILTRATOR

The best thing about THE INFILTRATOR is watching actor Bryan Cranston totally rock that role.  Not only is his character the right man for a difficult job, Cranston is the right actor for the part.  He makes the screenplay seem better than it is.  Based on real people and a true story, Cranston plays Robert Mazur, a federal agent and devoted family man in 1980s Florida.  He goes undercover to infiltrate the trafficking network of Colombian drug kingpin Pablo Escobar.  Mazur poses as a slick businessman who is an international pro at money-laundering. 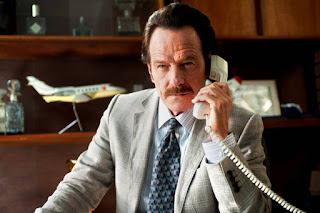 This is a businessman who'd be no stranger to the seedy world of drugs, booze and babes.  Like Bugs Bunny, the federal agent has to "Think fast, rabbit" because when he's basically given a sexy young hooker as a gift bag, he wants to avoid sexual contact.  This agent is solidly faithful to his middle-aged wife. 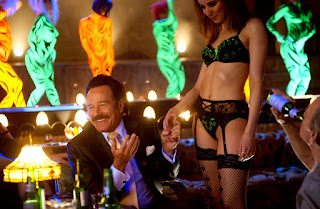 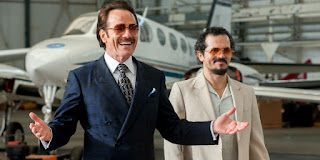 I do agree with what critics Tim Cogshell and Amy Nicholson said when reviewing this movie on the weekly Friday edition of Filmweek on Larry Mantle's weekday Airtalk show on KPCC Radio.  They said that THE INFILTRATOR is like a 2-hour episode of TV's MIAMI VICE -- only without the pastels.  Also the Cranston and Leguizamo characters wear socks.  When you know that this is based on real people, you will wonder why the heck this seemingly typical working class family man didn't take retirement when he could have and why he took on a new job that's about as easy as running barefoot through a minefield.  As you see him do the work, you'll also think "He must have balls the size of cantaloupes."  Here's a trailer.

Amy Ryan and Benjamin Bratt co-star.  I really liked Diane Kruger a lot as the new agent assigned to pose as the wife of the slick money-laundering businessman.  The new agent has the right stuff. 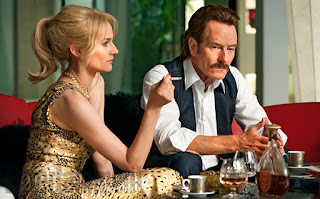 This movie is Cranston's show -- and he does not disappoint.  He's an actor who has paid his dues and deserves the success he's now having.  I remember him in national TV commercials before he became a terrifically wacky sitcom dad on MALCOLM IN THE MIDDLE.  Then the drama BREAKING BAD made him a definite TV star who'd go on to get an Oscar nomination for film work in 2015's TRUMBO.

As I mentioned, Cranston's performance makes the screenplay seem better than it is.  His movie star charisma and talent carry the movie.  Stay through the closing credits to see what became of the real life federal agents portrayed in the film.