Robert De Niro is THE INTERN

Nancy Meyers wrote and directed THE INTERN.  I do not mean this as a jab.  Her comedies are great in-flight movies.  They are.  You have a flight that's three hours or more.  A Nancy Meyers light comedy will make a couple of hours glide by.  She's not giving you Chinatown, Network or The Piano.  She may have directed a movie called It's Complicated, but her films aren't. They're packed with fabulous retail eye-candy and architecture porn.  You're assured a happy ending and enjoyable performances.  Her comedies make good date movies and, I bet, a couple of them are guilty pleasure pastimes for guys.  Back in 2003, I was at a cineplex in Manhattan's Chelsea section.  A big burly Latino dude, the kind of guy who would've been cast as a prison guard on HBO's Oz, turned to his lady friend and said, "What was the name of that movie we saw that I like so much?"  She answered, "Something's Gotta Give." A Nancy Meyers comedy starring Diane Keaton and Jack Nicholson.  Meyers directed Keaton to a Best Actress Oscar nomination.  I dig that movie too.  And I still feel that the late Eli Wallach should've received a Best Supporting Actor Oscar nomination for his tasty turn as a Hollywood veteran in Nancy Meyers' The Holiday.  He stole the 2006 movie with his wise and witty performance.  The Intern is another Robert De Niro "sweater comedy."  He's not the tough guy of mean streets like in Taxi Driver, Raging Bull and Goodfellas.  He's wearing more suburban attire and playing against his tough screen image, like he did in the comedy, Meet the Parents.  De Niro is a friendly AARP papa figure in this film. 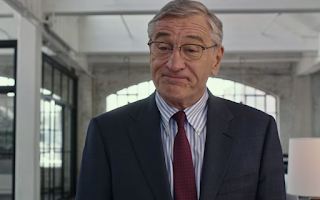 People in Nancy Meyers comedies have fabulous bedrooms and living rooms.  Minority moviegoers, such as myself, can look at characters in Nancy Meyers features and say, "Damn.  White folks live really well -- even when they ain't workin'."  Their homes look ready to be photographed for a glossy catalogue of home furnishings.  Their kitchens have refrigerators the size of the monolith in Kubrick's 2001: A Space Odyssey.  Robert De Niro plays the very likable Ben, a retired 70 year old gent who gets a job as an intern.  Retirement bores him.  He's a widower. He lives alone.  He has more ties in his closet that I saw in some Banana Republic stores.  And, yes, he has a nice bedroom. 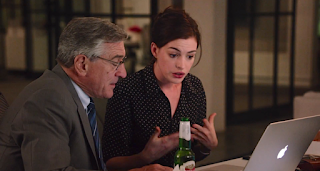 Ben is smooth.  Like two fingers of top shelf Scotch.  He doesn't butt in to one's affairs to fix things.  But fix things, he can.  Anne Hathaway stars as Jules.  She's the sweetly fussy and somewhat overwhelmed head of an online fashion company.  Jules is a bit skeptical of Ben, but she embraces age diversity in the workplace.  You know immediately that the intern will make his boss' life better -- at work and at home.  You know that the younger employees will come to dig Ben a lot.  Meyers, in her comedies, shows that folks 50 and over can be hip versus hip replacement.  The Intern is no exception.  Ben is mentally sharp, he's experienced, he's classy, he gives excellent advice and he's sexy to an older female fellow employee, played by the always delicious Rene Russo.

De Niro even goes a little Taxi Driver as he shuttles his young co-worker buddies. 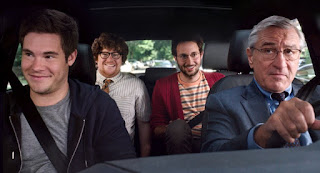 In the early 1940s, this would've been a comedy starring Jean Arthur and Charles Coburn as the older gent who turns out to be somewhat of a Cupid.  Think of the Arthur and Coburn chemistry in The Devil and Miss Jones  and The More the Merrier. 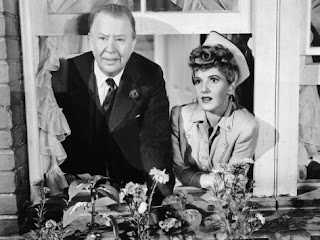 This film is slightly The Devil Wears Prada 2 with the assistant now a boss herself, still struggling with her confidence while trying to balance work and home life.  There's some discord in Jules' marriage to her stay-at-home dad husband.  Papa figure Ben will help. 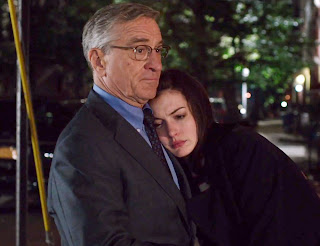 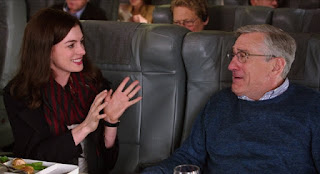 Can a female in New York balance an upscale career and a marriage?  Well, the 1942 Katharine Hepburn and Spencer Tracy comedy, Woman of the Year, showed that it's absolutely do-able.  So, theme-wise, this isn't anything new.  However, Meyers wraps a nice little tale of young women's empowerment up in some beige tissue paper and puts it in a decorative beige bag with a copy of AARP Magazine.  There is a gentle moment  with Ben and Jules -- he's watching a classic movie musical on TV -- that made my eyes a little misty.  I knew exactly what he, a widower, was feeling in that scene.  I've been there.  The Intern is not a great film that would whip noted critics into an Oscar buzz frenzy.  But there's something to be said for likable, courteous movie characters making you smile and taking you to a happy ending nowadays.

Robert De Niro and Anne Hathaway work well together.  The Intern has its humor and charm.  A nice pastime, a perfect in-flight movie.
at October 05, 2015