Colin Hanks takes a spin as a documentary director.  The subject of ALL THINGS MUST PASS is Tower Records.  Tom Hanks must be a proud papa indeed.  His son directed a truly interesting and surprising trip down music's memory lane.  But it's not just a look at the history of one of my favorite L.A. and New York City hangouts.  All Things Must Pass also works as a bittersweet look at what America seems to have lost in the workplace.  A group of misfits finds a place where their talents and individual personalities pop.  They're not perfect people but they're perfect for that business.  They love going to work and they love their boss.  He loves them back.  Those misfits are his family.  This all plays out when The Beach Boys and The Beatles are the kings of record sales and goes into the days of Bruce Springsteen, Elton John and cable's new MTV.  A small record store business, one that started with a boss who cared for the unique personalties that made up his staff, grew over time and became worth one billion dollars by 1999. 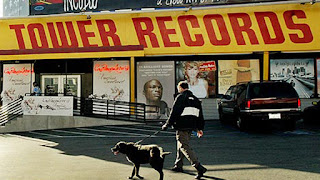 I dare you to look at this original Tower Records staff back in the day and not think of Cameron Crowe's wonderful valentine to rock music of that era, Almost Famous.  This Tower Records staff was a great shop team, a team appreciated for its good work. 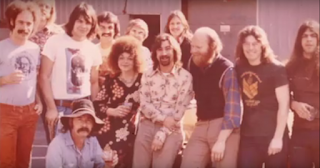 Five years after 1999, when corporate characters got involved and changed the whole vibe of their workplace, that beloved business filed for bankruptcy. 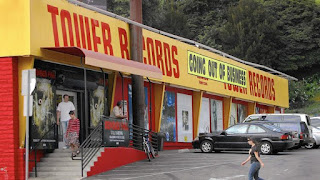 The sweet rebel who was the brainchild of this business is Russ Solomon.  He was a visionary with a heart. Thank goodness he woke up with a major hangover in San Francisco after a great date and needed a greasy breakfast so he could drive back to Sacramento.  You get the rest of that story in All Things Must Pass.  Here's a trailer.
The section about the Tower Records party, when the business was a huge success across the country, is memorable.  I will not give it away.  Just pay attention to the story about the unemployed, down-on-his-luck guy who got invited to that party. 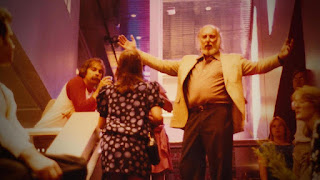 Tower Records started in a Sacramento that seemed culturally arid.  Director/actor Colin Hanks and his Oscar-winning dad hail from that area.  I bet young Tom Hanks spent a lot of time at the Sacramento Tower Records.  During my VH1 years, I did frequent taping in Los Angeles.  I'd fly from New York to L.A. and the company usually put me up in a West Hollywood hotel.  Tower Records on Sunset Boulevard was a regular stop for me.  I loved that place.  I loved the New York City locations.  You saw the Lincoln Center Tower Records store in one of Woody Allen's best movies.  Remember the record store scene in Hannah and Her Sisters where the Woody Allen and Dianne Wiest characters run into each other and humorously recall a disastrous blind date they once had?  That lovely, key scene in Allen's classic was shot in the Lincoln Center Tower Records store. 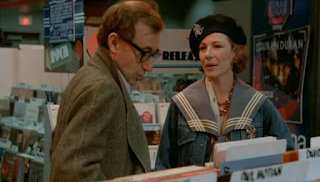 The staffers at Tower Records worked for Russ Solomon for well over a decade.  I totally understood how they felt.  They were working but it didn't feel like work.  I've been lucky.  I had a job like that.  The job was working as a veejay and talk show host on VH1.  Yes, I was glad when Friday rolled around so I could have a weekend off.  But, I never ever dreaded a Monday morning.  I was eager to get back to work and reunite with my terrific floor crew in the studio.  Years later when new management came in and said stuff like "Our research shows...," we knew the end was near.  We knew there would be corporate layoffs and changes.  The days of spotlighting the music and the artists -- artists from music, screen, stage and literature -- were drawing to a close.  I interviewed the following artists on VH1 in the late 1980s:  Paul McCartney, Phil Collins, Carlos Santana, Joan Baez, Kirk Douglas, Michael Caine, Meryl Streep, Shirley MacLaine, Carrie Fisher, Hume Cronyn and Jessica Tandy, Allen Ginsberg, Fran Lebowitz, Dominick Dunne and Norman Mailer.  I'm proud to say that Tom Hanks was a fan of my VH1 work. That kind of VH1 programming and guest list all changed when new management took over.  I could relate to the tender feelings of Solomon's original team.

All Things Must Pass: The Rise and Fall of Tower Records has exactly the kind of brisk vibe it needs.  It fits the store and the characters involved.  Big thanks to Colin Hanks. 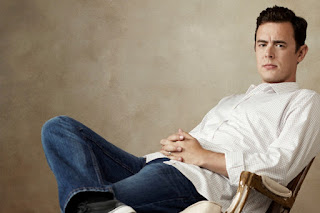 When Tower Records existed in the Lincoln Center area of Manhattan's upper west side, it was a very short walk from a revival movie theater.  The Regency.  I loved that theater.  So did many other New Yorkers.  You see The Regency in Hannah and Her Sisters just as you did the record store.  The revival movie house no longer exists. But, if it did, Colin Hanks' All Things Must Pass would be a good second feature to put on a double bill with Cameron Crowe's Almost Famous.  They both have the same heart and music.

All Things Must Pass is not just record store nostalgia peppered with sex, drugs, rock 'n' roll.  It also presents a look at America's appreciation and respect for its talented working class, a time that also seems to be a bygone era.  You'll wish that more company heads today possessed the vision, took the chances and had the loyalty to employees that Russ Solomon had.  When he started, some folks thought he'd surely flop.  Instead, his stores and even the design of them became popular parts of our pop culture.  This is a fascinating documentary from first-time director Colin Hanks and it's in theaters now. 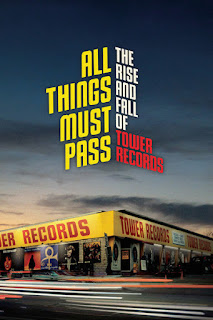