About A FALL FROM GRACE

The new movie mentioned is on Netflix. A dear friend of mine, one of the most courteous dudes I know, wrote on social media recently: "This Tyler Perry Fall From Grace might be one of the worst movies I've ever seen." I have known this gentleman for about 10 years and he always, always has a kind word to say. To read a strict comment like that from him was like...well, it was like getting mooned by a Quaker. It was so memorably unexpected. 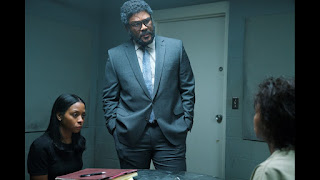 Of course, it made me want to go to Netflix and check out the production for myself. The courtroom drama/murder mystery, A FALL FROM GRACE, was produced, written and directed by Tyler Perry. It has three things you can always count on seeing in a Tyler Perry original movie -- suffering black women, a handsome but triflin' black man, and wigs. Grace Waters has been charged with murder. The murder of her handsome but triflin' younger husband. She confessed to the crime. However, no one has found the dead body. Even Grace is baffled by this because she pushed the body downstairs to the basement herself. Grace is in lock-up. Her hairdo looks as if she has just been struck by lightning. Her young lawyer-in-training doesn't feel that Grace should sign the plea deal. She senses there's more to the story. The badly-written story. She gets Grace, still a very Christian woman, to talk. In flashbacks, we see how she met the young man who claimed to be a globe-trotting photographer. In voiceovers, we see how he flirted with her, courted her and took her on a first date to dinner -- in a diner. IN...A...DINER. They are drinking white wine in a place that's on the same level with a Denny's. Behind them are white couples in booths eating diner food. The wine probably came from a bottle with a screw-off top. That should've been Grace's first clue to run away. The second was his hair. BrotherMan looked like an extra from Kid & Play's HOUSE PARTY in 1990. 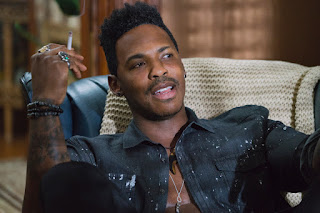 As to what happens later on, I won't go into detail. I will tell you that Tyler Perry, solo writer, has written for his specific audience. That audience will be happy to know A FALL FROM GRACE gives viewers that "Oh, no, she did not just go upside his head with a skillet" moment.

I know this is an unusual move, but I am going to use a clip from a classic Monty Python comedy film to describe one standout element of this Tyler Perry crime thriller. Here's a clip from MONTY PYTHON AND THE HOLY GRAIL.

Only in a Tyler Perry script can a character be bashed in the head several times with a baseball bat and it's just a flesh wound.

Tyler Perry is in the movie as a verbally abusive boss who screams in his office for a female employee to bring him coffee. Phylicia Rashad stars as the best friend to Grace. The legendary Cicely Tyson is in it for about ten minutes. She's sort of a Boo Radley character who lives in the best friend's big house. Here's a trailer for A FALL FROM GRACE. There are moments when you know that Mr. Perry is trying to give you a Hitchcock VERTIGO feeling (there's business with a necklace) but the movie ultimately winds up being like a sketch from the comedy series Keegan-Michael Key & Jordan Peele had on Comedy Central.