Lupita won her Oscar for work in a film directed by a black filmmaker, Britain's Steve McQueen. The film's Oscar-winning screenplay came from a black writer, Milwaukee's John Ridley.  After 12 YEARS A SLAVE, she had a few lines as a flight attendant in NON-STOP, a Liam Neeson action thriller. Yes, she did land a role in 2015's STAR WARS: THE FORCE AWAKENS which should've been called STAR WARS: THE FRANCHISE AWAKENS.  But, that film of hers didn't spark the buzz or historic international box office that her following feature did. A critical and financial success, BLACK PANTHER, got an Oscar nomination for Best Picture. Lupita Nyong'o performed in one of the most celebrated, influential films of the year -- an Africa-centric action/fantasy co-written and directed by an African-American filmmaker, Ryan Coogler, and featuring a predominantly black cast of lead and supporting actors. 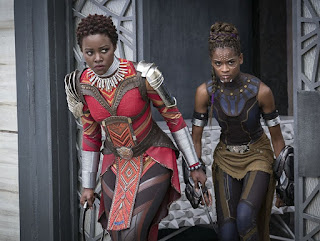 Over the weekend, social media and moviegoers went crazy over US.  Lupita had the lead female role in the new modern-day horror thriller from GET OUT Oscar-winner Jordan Peele. Us raked in $70 million at the box office. According to Entertainment Weekly, it cost $20 million to make. Moviegoers gave it the best opening ever for an original horror film and critics gave it some good reviews.  A few wrote that Lupita's performance as the haunted wife and mother deserves to bring her a Best Actress Oscar nomination.  US -- written and directed by black filmmaker, Jordan Peele. 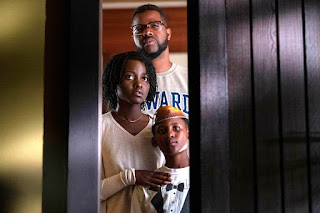 This is exciting and historic. Lupita Nyong'o followed his Oscar win with two big hits from Black American director/writers. Lupita, Winston Duke (who plays the husband in US) and Jordan Peele were interviewed individually on NBC's TODAY Show. This is a significant fact. US is a Universal Pictures release. TODAY is an NBC/Universal production. However, STRAIGHT OUTTA COMPTON directed by F. Gary Gray, another black filmmaker, was also a Universal Pictures release in 2015. Despite rave reviews and being number one at the box office for three consecutive summer weekends, TODAY turned its back on STRAIGHT OUTTA COMPTON bookings. No actors nor the director were booked for interviews. It was ignored even though Matt Lauer, then a TODAY Show superstar anchor, had a few appearances in STRAIGHT OUTTA COMPTON as the NBC news anchor. TODAY booked actor interviews and gave promotional airtime to other Universal releases of that 2015 season -- TRAINWRECK, the Amy Schumer comedy, JURASSIC WORLD and the animated feature, MINIONS. Jordan Peele's Oscar-winning box office champ, GET OUT, was a 2017 Universal release. Jordan Peele's film brought him an Oscar for Best Original Screenplay, a nomination for Best Director and a nomination for Best Picture.

Jim Orr is president of Universal's domestic film distribution.  According to Variety, Orr said "Put simply, Jordan Peele is a genius. He's managed to tap into something that the domestic box office can't get enough of. People can't wait to see what he does next."

Obviously NBC/Universal's TODAY Show producers have come to realize and acknowledge the box office power and artistry of black filmmakers. Especially when those films are released by the same corporate shop that's attached to the NBC morning news program.

For decades, Hollywood said that black stories with black actors in the lead roles were not marketable and wouldn't do business at the box office. Look at the huge box office business BLACK PANTHER and US did. Look at the casts. Lupita Nyong'o has starred in two Hollywood studio releases that slap the mess out of that old Hollywood attitude like Detective Virgil Tibbs slapping the taste out that old bigot's mouth in the movie IN THE HEAT OF THE NIGHT. Brava, Lupita!
at March 25, 2019