IN THE HEAT OF THE NIGHT on Criterion

Norman Jewison, how I love his works.  He's a fine director and, via his films, a social activist.  One of his most popular films, one shot through his lens of social activism, gets the deluxe Criterion Collection treatment come January. Jewison has given us hip entertainment such as THE THOMAS CROWN AFFAIR starring Steve McQueen and Faye Dunaway, JESUS CHRIST SUPERSTAR and MOONSTRUCK featuring Oscar-winning turns by Cher and Olympia Dukakis. He's given us films that reflected social issues such as A SOLDIER'S STORY, THE HURRICANE and his race drama/murder mystery IN THE HEAT OF THE NIGHT. That film took the Oscar for Best Picture of 1976 and Rod Steiger, who starred as the police chief in a small and racially hostile Southern town, won the Oscar for Best Actor.  In order to solve the murder of an important white married man, the police chief is forced to work with a black detective from Philadelphia played by Sidney Poitier. 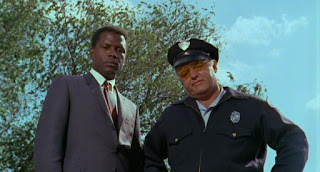 The 1960s was not an easy decade to endure. America hit extreme and fantastic heights, such as landing a man on the moon in 1969, and it had to pick herself up from the paralyzing national grief when President John F. Kennedy was shot and killed in 1963.  That year alone saw Dr. Martin Luther King's historic Civil Rights March on Washington in the summer. Black people were demanding equal opportunities -- the right to vote, the right to an education, fair housing. A month after the march, four little girls were killed in a racist bombing of a church in Birmingham, Alabama.  Two months later, on November 22nd, President Kennedy was assassinated.  It was a decade of riots and rock concerts. There were the Watts Riots in South Central L.A. that made national headlines when I was a little boy and growing up in South Central L.A.  There was peace, love, rock 'n' roll at a 3-day event in New York called the Woodstock Music Festival.  In between Watts and Woodstock came this Norman Jewison drama. 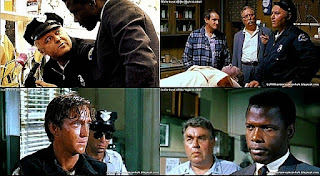 Sidney Poitier starred in IN THE HEAT OF THE NIGHT.  By that time, he'd made history as the first black actor to win the Oscar for Best Actor.  That was for his performance in a heartwarming, small-budgeted comedy that did big business at the box office.  In 1963's LILIES OF THE FIELD, he played the handyman on the road in Arizona who winds up building a chapel for a small group of immigrant Eastern European nuns. 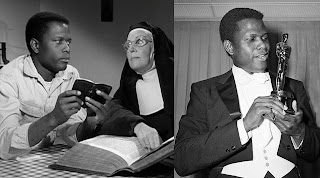 Initially, it's been reported, Poitier did not want to go down South to shoot IN THE HEAT OF THE NIGHT. He and Harry Belafonte had attended the March on Washington. They were friends with Dr. King and active in the Civil Rights cause. He and Belafonte had been harassed down South during Civil Rights activity and he didn't want to put up with that again. Jewison assured him that he'd take care of things, especially lodging.  Many upscale hotels in the South were segregated and would not accept black guests.

In the 1960s, after his Oscar win, Sidney Poitier made Hollywood history by becoming the first black performer to be a top box office star. People, black and white, went to see movies because Sidney Poitier was in them.  When the Oscar nominations for films of 1967 came out, Poitier made history again.  He wasn't nominated -- although IN THE HEAT OF THE NIGHT boasts one of his best screen performances -- but he starred in two of the five nominees for Best Picture.  They were GUESS WHO'S COMING TO DINNER and IN THE HEAT OF THE NIGHT.

An interracial romance and engagement are at the heart of GUESS WHO'S COMING TO DINNER. Today, that film, famous for the final screen pairing of Katharine Hepburn and Spencer Tracy, may seem sweet and sentimental. But, like IN THE HEAT OF THE NIGHT, it also touched on some real racial inequality in America. When the movie was in production, interracial marriage was still illegal in several American states. The Supreme Court had not yet passed Loving v. Virginia.

1967's IN THE HEAT OF THE NIGHT was awarded its Oscars in 1968.  That year, for the first and only time in all its history, the Oscars telecast was postponed and re-scheduled out of respect due to the nationally-televised funeral and national grief after Dr. Martin Luther King's untimely death. He was shot and killed by a racist assassin on April 4th.  The Oscars telecast had been originally scheduled for April 8th.

Fifty years later, in an era of Black Lives Matter and the KKK activity in Charlottesville, VA last year, Norman Jewison's IN THE HEAT OF THE NIGHT still touches a socially relevant nerve.

The most famous scene in the film is the slap scene.  In movie theaters -- walk-ins and drive-ins -- black folks cheered at this scene as if our home team had just scored a grand slam to win the World Series.  It wasn't just Detective Virgil Tibbs slapping the taste out that bigot's mouth, it was black America standing up and slapping racism in the face.  That scene represented how black Americans felt.

Watch the scene and then read my bit of black film history about it.


You have the modern-day plantation owner, if you will, who still sees things in terms of Master and Slave. He's the Master until Detective Tibbs slaps him back.  The white local police chief and the black butler witness this.

The butler was played by veteran multi-talented actor Jester Hairston.  Mr. Hairston acted, directed stage productions, sang and composed gospel music.  In the movie LILIES OF THE FIELD, one of the most audience-pleasing scenes is the one in which Homer (Poitier) teaches a simple gospel song to the foreign nuns.  The song is called "Amen" and it became quite popular. A few years later, we Catholic school kids would be singing it in weekday and Sunday masses. 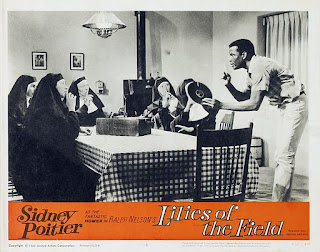 "Amen" was written by Jester Hairston -- and he dubbed Sidney Poitier's singing voice in LILIES OF THE FIELD.

Jester Hairston played Tom Robinson's father in TO KILL A MOCKINGBIRD and he's also in LADY SINGS THE BLUES, FINIAN'S RAINBOW and BEING JOHN MALKOVICH. He can be spotted in earlier Hollywood classics such as 1941's SULLIVAN'S TRAVELS and 1942's IN THIS OUR LIFE starring Bette Davis and Olivia de Havilland.  Jester Hairston was a regular on the TV sitcom called AMEN that ran on NBC from 1986 to 1991.

The Criterion Collection releases its edition of IN THE HEAT OF THE NIGHT on January 29th.
www.Criterion.com.