September is an overdue and breakthrough month on TCM (Turner Classic Movies).  Black film critics will be on Tuesdays and Thursdays to present "The Black Experience On Film."  I talk about this in my current podcast episode.  I explain why this TCM special event is overdue by reminding you of the 1980s when NBC, CBS and ABC network morning shows each had a weekly film critic.  Siskel & Ebert gave us film reviews on a new syndicated show called AT THE MOVIES. Pairs of critics replaced them on SNEAK PREVIEWS. Today, the CBS MORNING SHOW has film critic David Edelstein.  What do all those critics have in common?  All white males.  Did TV executives who book and hire think black film critics didn't exist?  Let's just say that opportunities were not and have not been equal, so much so that Rotten Tomatoes made recent New York Times news with the announcement that it added 200 critics to help repair its lack of race/gender inclusion.  Rotten Tomatoes was 82% white male. It's time to let diversity march in. 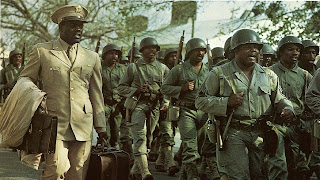 This month, TCM's "Black Experience On Film" includes airings of A SOLDIER'S STORY (1984) and A RAISIN IN THE SUN (1961), two films based on hit plays. 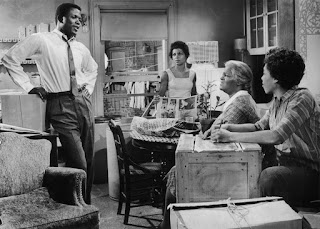 In the podcast, I'll tell you about the wall director Norman Jewison had to punch through to get his film, a story with a predominantly black cast, made.  I'll tell you how black playwright Lorraine Hansberry was groundbreaking on Broadway and with the Hollywood studio adaptation of her hit play.  Members of her original Broadway cast -- Sidney Poitier, Ruby Dee, Lou Gossett. Jr., Claudia McNeil and Diana Sands -- recreated their roles in the screen version.

Members of the AAFCA, the African American Film Critics Association, will be on TCM for the "Black Experience On Film" nights.  These are critics you rarely see on national television.  In fact, this month may mark the first time many TV viewers see black female film critics.  The Los Angeles Times is the only outlet I can think of that reports on what awards the African American Film Critics Association gives out annually.  And don't think that the AAFCA only honors black actors.  It gave acting awards to JK Simmons for WHIPLASH (he later won the Oscar for Best Supporting Actor of 2014) and Frances McDormand for THREE BILLBOARDS OUTSIDE EBBING, MISSOURI (she later won the Oscar for Best Actress of 2017).

The one awkward programming element I see in this special event is that the TCM "Black Experience On Film" spotlight premieres on Sept. 4th, hours after the TCM daytime airing of HOLIDAY INN, a major 1942 Paramount musical with several characters in a blackface production number saluting Abraham Lincoln ("...who was it set the darkies free? Abraham! Abraham!") and sung by Bing Crosby. In blackface. HOLIDAY INN should've been scheduled for another day.

Films are my passion.  I took Film Journalism courses at Marquette University. After graduation, I was the first black film critic seen on Milwaukee TV.  I did that for four years, plus celebrity interviews. I got hired away by New York City in 1985.  I had my own talk show on VH1.  That terrific opportunity was in the late 80s. In 1992, I started years of work on local and network TV news shows in New York City.

From 1992 to 2006, white broadcast executives frequently asked me "Do you know anything about movies?" and "Have you ever done any entertainment news pieces?" when I pushed for auditions and equal opportunities.  It was always frustrating to feel that my skills and history had been overlooked. That's why I keep pushing for race/gender diversity and inclusion.  I explain more in the podcast episode.  Also, I do feel that we black TCM fans have been starved for representations of ourselves in its host segments over the last couple of years. We have the knowledge and interest to participate in the general classic film conversation.

Please watch members of the African American Film Critics Association on TCM this month.  It is important that they're seen. Now here's some of my stuff to help underline points I make in the podcast.  I'll start with clips from my VH1 host years.


Meryl Streep told me how seeing Liza Minnelli in a 1977 Broadway musical directed by Martin Scorcese changed her approach to acting.

VH1 flew me to London to interview Paul McCartney.

Here are samples of my network and local TV program work from the 1990s to 2000.

To hear my podcast, just go here and scroll down to "Fall Colors on Turner Classic Movies":  www.MOCHAA.podomatic.com.

Remember to check out the Lorraine Hansberry documentary that premiered on the PBS American Masters program early this year.  Look for it online.  It's called LORRAINE HANSBERRY: SIGHTED EYES/FEELING HEART.