He's won two of them.  He's been nominated for more Oscars than any other African American actor in all Hollywood history. With his Best Actor nomination early this year for ROMAN J. ISRAEL, ESQ., Denzel Washington had racked his 8th nomination.  With the sensational reviews he got a few days ago for his lead performance in a revival of Eugene O'Neill's THE ICEMAN COMETH, he's probably in store to rack up another Tony nomination too. 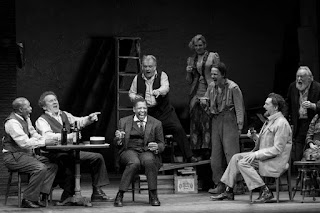 The CBS SUNDAY news program had a nice interview feature on Mr. Washington today.  It was taped onstage at the theatre.  He talked, of course, about his new Broadway show and about the early days of his career.  During the piece, there was clip of PHILADELPHIA, the 1993 film in which he played a homophobic lawyer who represents an AIDS-stricken unemployed lawyer fighting for his civil rights in the Philadelphia.  The bigotry of homophobia cost him his job. 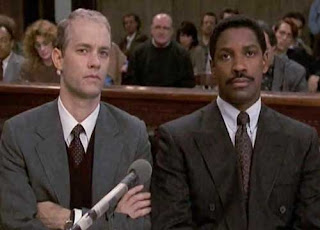 I noticed a detail in two Denzel Washington movies and both details involve leaders in the Civil Rights Movement.
When Denzel's character meets the ailing Tom Hanks character for the first time, you see the black lawyer tense up when the white man in need of legal help states that he has AIDS.  When you see the black lawyer quickly end their introductory handshake, there's a framed photo of Dr. Martin Luther King seen on the office wall in the shot in between the two characters -- and Dr. King seems to be gazing at the AIDS victim.  That detail tells us that the black lawyer will be tested. If he adheres to the principals of Dr. King, he will have to step out of his own narrow-minded feelings about gay people and do the bigger work.  He'll have to fight for the mistreated man's civil rights.  As Dr. King would have.

ROMAN J. ISRAEL, ESQ. is a 2017 film drama that put Denzel in legal action again.  Here, he's quite different.  The story is set in Los Angeles.  He's middle-aged, on the chunky side, in need of a haircut, in need of a new wardrobe and he takes the bus because he can't afford a car.
He's also a brilliant and idealistic defense lawyer.  He has a different personal rhythm and behavior. We assume it's autism because there's a slight touch of the RAIN MAN about his personality.  However, he's like a walking law library and his skills are needed.  A sleek, high profile law firm is keen on adding his services to its roster but Roman's roots are in activism.  He's got a small, cluttered apartment that he can barely afford.  He's romantically unattached.  When he's at home and working, we saw above him a framed photo on the wall.  It's a photo of Dr. Martin Luther King's most trusted advisor -- the brilliant, cultured, outspoken man who was called "The Architect of the March on Washington."  That man, who stood behind Dr. King when he delivered the now historic "I Have a Dream" speech was the black and openly gay Bayard Rustin. 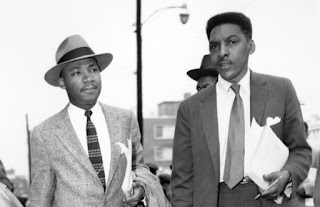 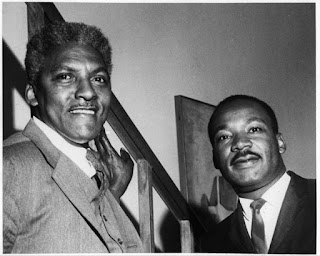 Rustin was an outsider within a large group of outsiders.  This was back in the day when men could get arrested for simply being in a gay bar.  He was gay and black. Roman will be an outsider in a room of outsiders when the middle-aged activist is put down by young black activists because he's "old school."  There's no "love interest" for Denzel in this movie but there is a lovely woman who goes out with him and is greatly attracted to the true light within him.

ROMAN J. ISRAEL, ESQ. has one of my now favorite Denzel Washington performances.  He's more vulnerable here than he's come to be over the years. His characters have flaws that are dramatic, serious, nothing to laugh at -- think THE HURRICANE, FENCES, FLIGHT, TRAINING DAY.  He's a no-nonsense hero in THE EQUALIZER.  In ROMAN J. ISRAEL, ESQ., there's a touch of doofiness about his character that makes him warm and inviting.  Roman eventually will experience melodramatic, heartbreaking incidents.  He'll get spruced up and beaten up.  But, before then, it's refreshing to see something about a Denzel Washington character that "lightens up" a bit, if you know what I mean.

I thought the framed photo of Bayard Rustin in Roman's humble apartment was a most interesting and an inspired touch.

Oh!  One thing that was not mentioned in the CBS SUNDAY feature.  Well, two things.  There was no mention of his Oscar history as Hollywood's most Oscar-nominated black actor.  And there was no mention that David Morse, another terrific veteran actor, joins Denzel Washington in the cast of THE ICEMAN COMETH.  David Morse and Denzel Washington were co-stars on the hit NBC series, ST. ELSEWHERE, back in the 1980s. 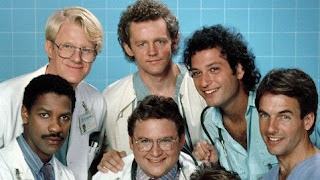 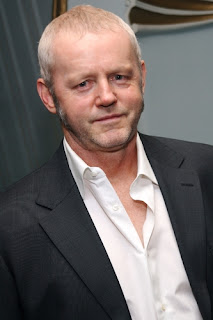