Sidney Poitier was one of the top box office stars at that time -- and the first Black actor in Hollywood history who ever was a top box office star.  I was new in high school but I already had a few years of serious new and classic film love under my belt.  By the time April started, the Oscar nominations were out and Sidney Poitier starred in two of the top films nominated. No Black person who saw IN THE HEAT OF THE NIGHT at a drive-in or walk-in movie theater will forget the collective "Whoa!" from the audience when Mr. Poitier, as Detective Virgil Tibbs, slapped the taste out that racist white man's mouth after he, in a sense of white superiority, had slapped Det. Tibbs.  That slap represented our national slap in the face of racism.  Sidney Poitier represented us and that slap, during the Civil Rights decade, represented how we African Americans felt. 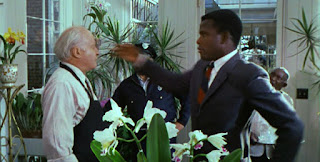 Dr. Martin Luther King, Jr. was still a living voice, a controversial and vital living voice, the first day of April.  He got a mention in the other hit film starring Sidney Poitier.  GUESS WHO'S COMING TO DINNER starred Mr. Poitier, Spencer Tracy and Katharine Hepburn. 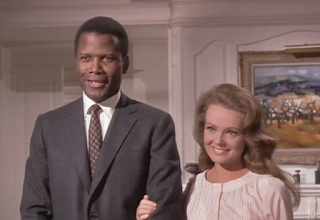 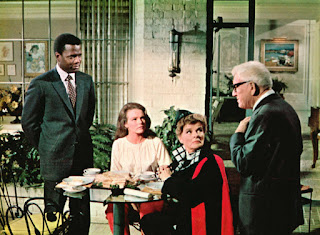 On April 5th, folks our South Central L.A. community went to work and school with a solemn quietness not usually associated with a Friday morning.  At school, students and teachers didn't talk much.  We were grief-stricken. I attended a Catholic all-boys high school in Watts.  Our student body was led in early morning prayer for Dr. King.  The Father Robinson, our principal, announced that classes would end for the day at 10am in case the assassination of Dr. King sparked turbulence in the community.  We were dismissed early for the weekend and told to go directly home.

Dr. Martin Luther King's life -- and death -- had an impact on people in the Hollywood industry.  Many entertainers loved his work and attended his historic 1963 March on Washington.  The corporate branch of Hollywood itself needed to embrace his message of  equality.  Here are my memories of how Dr. King's untimely death affected the 1968 Academy Awards telecast.