She's the Star of LADY BIRD

She's gone from THE GRAND BUDAPEST HOTEL to BROOKLYN to Sacramento.  And she may add another Oscar nomination to her credits later this month.  I find young Saoirse Ronan to be an absolutely fascinating actress.  Back in the 1930s when Zero, the new lobby boy for The Grand Budapest Hotel, falls in love with Agatha the pastry chef, I felt "What's not to love?"  Agatha was like a sweet gourmet pastry come to life.  I loved Saoirse Ronan in THE GRAND BUDAPEST HOTEL. 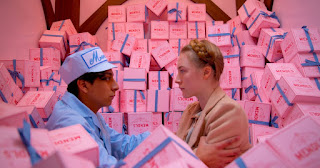 She took us to conservative, Catholic Ireland in the 1950s.  She played the warm, witty, independent young woman determined to find a new life for herself.  The lovely Irish immigrant will find that new life in Brooklyn.  For her performance in BROOKLYN (2015), Saoirse Ronan received a very well-deserved Oscar nomination for Best Actress.

Now look at her as the high school senior in a post-9/11 America soon to graduate from a Catholic school in Sacramento.  She cannot wait to flee her hometown and relocate to someplace vivid and interesting, someplace with cultural offerings.  But she's from a working class family, money is tight, and her working mom is a heavy passive-aggressive piece of furniture.  This high school senior call herself... Lady Bird.  LADY BIRD, written and directed by Greta Gerwig, may bring Ms. Ronan another Best Actress Oscar nomination.

Yes.  You just saw the same young woman as the lead actress in both of those movies.  See what I mean?  She's absolutely fascinating.

On the January 7th edition of CBS SUNDAY, Greta Gerwing was interviewed in her hometown by a CBS reporter.  Gerwig is from Sacramento.  In a voiceover during the feature, reporter Tony Dokoupil said that LADY BIRD is celebrated as "the best reviewed movie of all time" on Rotten Tomatoes.  I liked Dokoupil's piece but I felt he was wrong.  I went to the Rotten Tomatoes site.  LADY BIRD got a 99%.  Before Greta Gerwig's film, Jordan Peele got a 99% for GET OUT, the psychological horror film that he wrote and directed.

I'll review LADY BIRD on my podcast.  But I will tell you this here and now -- Saorise Ronan is, once again, remarkable.
at January 07, 2018