I went to Netflix and started watching it shortly after midnight.  When it ended, about 2 hours and 15 minutes later, I sat there silent, moved and feeling rather blessed.  Like I had just experienced a stirring new member in the fine art of film.  This won't be a long review.  Maybe I'll get to talk about MUDBOUND in a podcast soon.  I'll keep you posted.  But, I will once again heap great praise upon director Dee Rees.  I first did that when I saw her 2011 film, PARIAH.  I will rejoice if Dee Rees gets a Best Director Oscar nomination for MUDBOUND.  She deserves it.

I would be so happy if Jason Mitchell got an Oscar nomination for his performance as Ronsel, the poor Mississippi Delta son who serves in the segregated troops of World War 2. 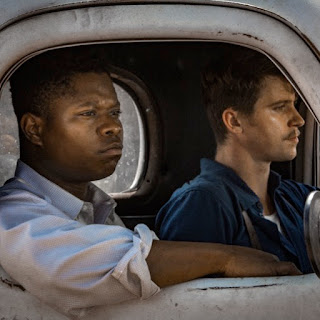 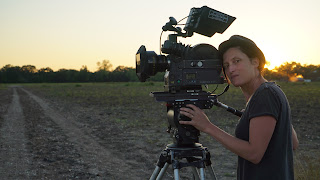 I would cheer if Rachel Morrison makes Academy Award history as the first female to get an Oscar nomination for Best Cinematographer.

Two families in rural Mississippi on the brink of the Pearl Harbor bombing.  One family is white, the other is black.  Mud unites them on the land that can be a terrible beauty.  The look of vast fields topped by a dusk so pleasing to the eye can't erase the fact that the land is harsh and the weather can be unforgiving.  The white man, continuing a taught lesson of superiority, inconveniences the black family man with his need for help in the mud.  A white son and a black son will both be drafted to serve overseas in World War 2.  Both will signs of PTSD when they return home.  After the war, the world has changed.  But Mississippi has not changed for the two sons who return home.   The effects of war connects them. Will they be able to free themselves from the mud?

I watched MUDBOUND on Netflix because its a nominee for the SAG Awards and I'll be voting soon.

I want to see MUDBOUND again.  On a big screen in a movie theater.  It is that rich a visual experience -- like films directed by David Lean, Fred Zinnemann and George Stevens that went on to become classics.  So.... if you have Netflix and you're up for a fine film to watch... I highly recommend MUDBOUND.  Click onto the link to watch the trailer.  By the way -- Brava, to Mary J. Blige! What a performance.